I just got an early Christmas present from, of all people, rapper Talib Kweli.

This is the guy who tried to have what I guess he thought was a conversation with me about state nullification. I pointed out the ways the abolitionists used states’ rights to fight against slavery. He had obviously never heard this before.

You’ll be shocked to learn that he didn’t exactly respond with, “That’s really interesting. Hey, whatever works to fight slavery, I’m on board with!”

Anyway, here is his gift to me:

After a thousand people pointed out his error, he fell back on the old Soviet line, which I don’t think anyone has seriously advanced since the 1960s: why, the Wall was an “anti-fascist barrier”! 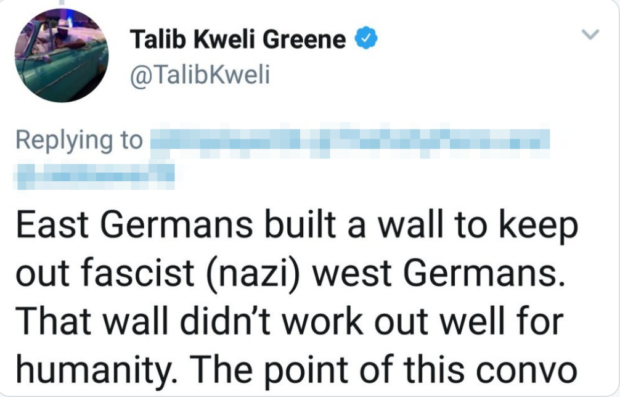 Now a few readers will try to spoil my fun by saying, “Woods, who cares about this guy? Why bother?”

And (2), as any of you who have seen him interacting with our folks on Twitter well know, the guy is certifiable, accusing people of all races of being “white supremacists” and “Nazi lovers.” So this couldn’t happen to a more deserving guy.

But we’ve all suffered from it.

The fact that grown flower children are now in effect demanding the foreign-policy advice of Henry Kissinger and Hillary Clinton likewise suggests something is seriously wrong.

How about learning from me, and from other professors I trust?

That’s the solution to educational malpractice.

Plus: all membership levels 35% off until midnight tonight.

Treat yourself, or give the gift of knowledge.