What America Has Done To its Young People is Appalling

Critics are perhaps too quick to judge America’s young people, citing declining SAT scores, obesity, drug overdoses, addiction to smart phones, bizarre alterations of personal appearance and high rates of (alleged) mental illness.  It’s just too easy to be annoyed at how some of the cashiers at the local grocery store seem unable to carry on a conversation or have chosen to mutilate their faces with pieces of metal.  We are perhaps too quick to condemn the crazed behavior of young protesters in recent years without fully considering what our government, society and culture have done to these poor souls.

Let’s begin at the beginning.  Forty percent of Americans are now born out of wedlock.  Single parent families are associated with a long list of social maladies:

“Children who grow up with only one of their biological parents (nearly always the mother) are disadvantaged across a broad array of outcomes. . . . they are twice as likely to drop out of high school, 2.5 times as likely to become teen mothers, and 1.4 times as likely to be idle — out of school and out of work — as children who grow up with both parents. Children in one-parent families also have lower grade point averages, lower college aspirations, and poorer attendance records. As adults, they have higher rates of divorce. These patterns persist even after adjusting for differences in race, parents’ education, number of siblings, and residential location.” Sara McLanahan, “The Consequences of Single Motherhood,” American Prospect (Summer 1994). 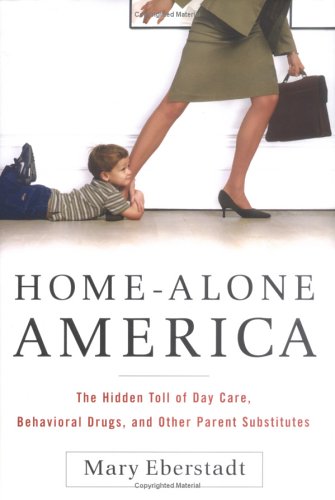 In addition, a large number of marriages will fail.  That means that close to sixty percent of children will not grow up in the classic nuclear family of the 1950’s.   How much of this change is due to government policies is hard to say, however, as government grows, the traditional family shrinks.  When government subsidies to single parent families increase, so do the number of such families.  As Jack Kemp used to say, when you subsidize something, you get more of it.  Yes, culture also plays a role but don’t forget that government can change the culture as well.  Women tend to come out ahead in Family Court—they get the house, the kids and much of the man’s spare change thanks to unrealistic support formulas.  This provides an incentive in marginal cases for women to seek a divorce.  Increases in divorces made them more socially acceptable over time.

Even with intact families, the idyllic norm of the 1950’s, where the mother typically stayed home to take care of the kids until they reached school age and perhaps even long afterwards, has been destroyed.  These days, in the typical American family, both parents work fulltime which means that a very large percentage of children are consigned to daycare.  Daycare was virtually unknown in my world growing up in the 1960’s.  On the working class South Buffalo street where I grew up, I don’t recall any mother with young children working full-time.  The overwhelming majority were housewives while a few would get part-time jobs after the kids started school.  I was not aware of any daycare centers in the neighborhood and certainly do not recall anyone who ever attended one.

The statistics bear this out.  Daycare was once unusual for the middle class, but now over two-thirds of children lack a full-time stay-at-home parent. (Source: Center for American Progress)  Like single parent families, daycare carries with it a long list of undesirable likely consequences. These include “more mental and behavioral problems, more mind-altering drugs, more STDs, more obese, unhappy and institutionalized children of all ages.”  Mary Eberstadt, “Home-Alone America: The Hidden Toll of Day Care, Behavioral Drugs, and Other Parent Substitutes” (2004) (A fabulous but widely-ignored book).

Thus, in the critical first five years of life, the vast majority of Americans are deprived of the obvious benefits of growing up in an intact family with the mother at home in the pre-school years.  We baby boomers took this for granted.  That world is gone with the wind.  Why?  Two main reasons: feminism and progressive big government.  Feminism encouraged women to get out of the home and out from under the alleged control of husbands who allegedly controlled the family finances.  Traditional mothers were derided as “baby factories” as if working in an actual factory making widgets was somehow more edifying than nurturing human beings at home.

Second, the trend toward ever larger and more intrusive big government that started in the Progressive Era around 1916, hadn’t yet weighed down the economy to the extent that two incomes were needed to support a family in the 1950’s and 1960’s.  Yet, government grows steadily under progressive ideology, and after the twin shocks of the Great Society and the Vietnam War, by the 1970’s stagflation kicked in and it became increasingly difficult to support a family with one income.  Married women, whether they liked it or not or were under the sway of feminist ideology, were pushed into the labor market if only to have most of their wages seized to pay the dozens of taxes the family must pay.  The take-home pay of many women is barely more than the family’s total tax bill.  Ironically, “women’s lib” ended up converting women from baby factories into full-time tax livestock.

It gets worse.  After five years of being raised by strangers and deprived of maternal care, 90% of American youth are compelled to attend government schools for 12-13 years.  As I explained in my book, Government Schools are Bad for Your Kids, government schools are rife with crime, drugs, promiscuity, mediocre education and political propaganda.

Next comes college for about 70% of Americans.  While many young people thrive in college, many others graduate with huge debt and poor job prospects and a hard left ideology poorly suited for success in life.  Leftism teaches resentment of others, inculcates a victim mentality and teaches some students to hate their skin color while teaching others to blame the skin color of others for the difficulties they will face in life.  Leftism does not inculcate the positive thinking, initiative, work ethic and perseverance in the face of adversity which are the hallmarks of successful people.

Finally, we send this disadvantaged group of young Americans into a very hostile job market.  Here, we saddle them with their per capita share of government debt as the guarantors of the fraudulent campaign promises of dead progressive politicians such as FDR and LBJ.  A good accountant could figure how this debt translates into increased per capita taxes by dividing the number of taxpayers by the annual debt service.  It is perhaps $2000 per person.  Next comes student loan debt, a contrivance once again of dead progressive politicians to benefit overpaid progressive and left professors and administrators.  This can easily be yet another $2000 per year.

Young people are shunted into the job market because the progressive state has made starting a business extremely difficult with a bundle of taxes and regulations.  The mere process of getting a job, which used to take a few days in the free market, now takes many months. Many jobs require government permission.  Employers need to vet employees more carefully to avoid a plethora of costly discrimination lawsuits.  Young workers’ productivity is largely eaten up by the direct and indirect effects of a myriad and taxes and regulations, often leaving workers with just enough to pay the bills but not move forward, have families or save for the future.  As a result, a record number of young people are forced to move back in with their parents.

The startling message I want to convey is that modern America treats its young people abominably from birth through young adulthood.  This is largely because of the direct and indirect effects of numerous destructive progressive policies.  This explains the numerous problems many young people are having.  They have a right to be angry but need to focus on the true cause of the overwhelming majority of these problems: progressive big government.  To the young people of America, I say: take the red pill; then, don’t get mad; get even.  Make life better for your own children than what progressive America foisted upon you.