Chris Hayes the liberal talking head says he’s afraid of black people.  By saying it, he joins the ranks of Ta-Nehisi Coates, who wrote a whole book about it; Jesse Jackson, who worried out loud that one of them was going to mug or murder him; Al Sharpton, who left blackville the second he had the chance; James Baldwin, who told us to love Americans and then exiled himself to France; Barack Obama, who lives in alabaster Kalorama and sent his kids to white schools; and Maxine Waters, who got so rich riling up her constituents that she was able to move away from them.

Black celebrities aside, one thing you never see a white liberal do is move into a black neighborhood.  Chris Hayes won’t because he’s already lived near one, and he says he hated it.  White liberals have a list of reasons they avoid them – not getting punched in the face again, in Chris’s instance.  Rate of crime.  A superior level of order.  Cleanliness.  Proximity to the businesses they actually work at.  That kind of thing.  It isn’t white supremacy when liberals do it, though, because they aren’t considered white supremacists.  They’re telling you they’re scared, but they’re also beating their chests.   They love black people.  They just prefer to live anywhere but black neighborhoods.

This fact is the basis of Chris Hayes’s book, A Colony in a Nation – probably one of the finest books to come out of the Black Lives Matter movement, and if not the finest, then one of the funnest (my personal favorite? We Were Eight Years in Power).  It covers multiple aspects of black neighborhoods and makes you want to get away from them.  Then it asks you to embrace them.  How anyone could describe these war zones and then ask you to bus your kids to them is beyond my understanding, but it seems to be the gist of Black Lives Matter.  Your kids might be shot, but you won’t be a racist. 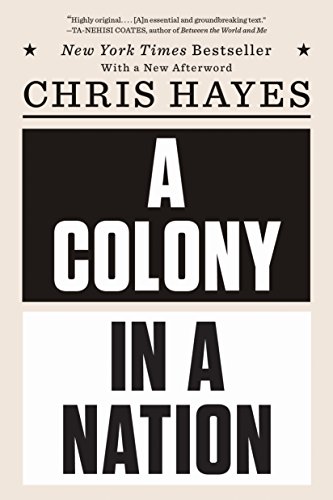 Chris Hayes is pretty honest about all this, and he expresses himself in bouts of self-contradiction.  He says “broken windows policing” is evil right before admitting, in part, that after it, “New York went from rundown and dangerous to glossy and glamorous.”  He wants officers hamstrung while admitting that the process led big cities to the “biggest jump [in homicides] since 1971.”  He says cops are too skittish around blacks while admitting that black neighborhoods are extremely dangerous for cops.  He says whites ought to be less fearful of the ghetto while telling us everyone is afraid of it.  He says white people are more racist against blacks while telling us “even African Americans consistently show antiblack suspicion.”  He says drug crime is more devastating than KKK terrorism and then asks us to go easier on crackheads.  He says white people overreact to violent crime and then says their overreactions are responsible for the safety of white neighborhoods.  He curses a lack of investment, and when white people invest, he rails against gentrification.

We wish this was the end, but Chris Hayes has a true knack for treachery.  He says our cities ought to be more lawless – as we are at our colleges.  He says we ought to be more considerate with our criminals – as we were with Brock Turner, the rapist (yes, he really said this).  He says our criminal justice system puts undue stress on families while proving that criminals put undue stress of families.  He says everyone wants a nice place for his children to grow up.  Then he calls it racist when police harass junkies, prostitutes, rowdy hooligans, the mentally disturbed, loiterers, panhandlers, drunks, and people yelling in the streets.  He says the crime drop since The Crack Years is “one of the most stunning statistical and sociological mysteries of our time.”  Then he shames “white fear” for worrying that it could all reverse.

Planet of WarRussia Is Disadvantaged by Her Belief