While NASA has now confirmed that the outer atmosphere is getting cooler, it seems desperately insane for people to keep denying the possibility the Global Cooling is taking place rather than Global Warming when the former brings famine and the latter brings economic expansion as civilizations rise. The rise of Rome was due to global warming as was the case after the Dark Age when they call that the Medieval Warming Period which was 950 to 1300AD.

The concern from just a technical model perspective is that the warming period we have had post-1600 and the low of the Little Ice Age has not exceeded that of the Medieval Warming Period. If we simply look at this chart from a technical perspective, it appears more that we are in a grand downtrend for the past 6,000 years. This is deeply concerning for we tend to have these periods where civilization turns downward. It would be very nice if we just had authoritative research funded to explore Global Cooling to save society rather than this nonsense of Global Warming just to raise money for politicians who NEVER get enough. 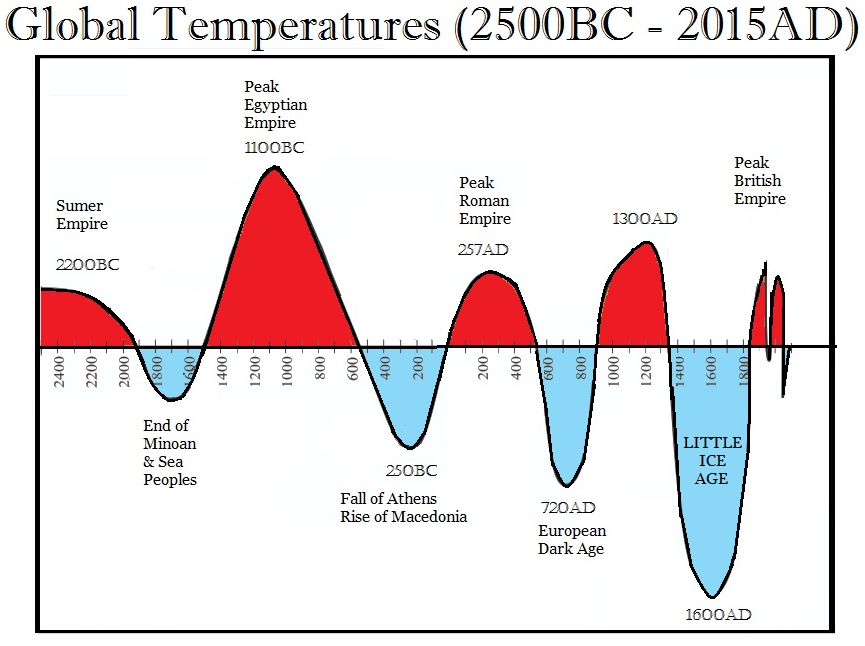 In Australia, with one week from summer, it is still snowing on Victoria. In fact, one of the top NASA scientists has broken camp and warned that the surface temperature of the sun has collapsed so much, he fears a new Ice Age is upon us. Meanwhile, this has been the COLDEST Thanksgiving in 150 years!

What we must understand is this has gone beyond just breaking records for one-day events. This time around, it’s not just the severity of the cold that’s getting to people. It’s also the DURATION! The most reliable computer model projections have shown that the Arctic air has moved all the way down into Texas. Indeed, here in Tampa, the temperature is about 10 degrees below normal at times. The decline in the energy output of the sun has been far more rapid than most expected. This could perhaps be a warning sign that we will make a new lower low or retest the low temperatures on a sustained basis that match the Little Ice Age.

The Little Ice Age marked a period of cool summers and bitterly cold winters to New England. There was the Great Snow of 1717, which buried houses and resulted in having to organize search parties that were even lost while looking for buried survivors. Them there was the fame Cold Friday of 1810. People actually died in their homes as the temperature suddenly plummeted more than 60 degrees in less than a day. It was years later when Henry David Thoreau’s mother recalled how dishes froze as fast as they were washed even right next to the fire.

The Post Office even issued commemorative stamps in 1976 noting that winter event. Washington and his troops suffered more in Morristown, N.J., during the Hard Winter of 1779-80. Violent snowstorms had battered the Northeast, and both Boston and New York harbors were completely frozen over. The weather made it impossible to bring supplies to the men, many of whom had no coats or even shoes. They couldn’t even eat for days at a time. The soldiers finally mutinied in early May, though an officer persuaded them to abandon their rebellion. Just as the weather had defeated Napoleon, weather nearly defeated the American Revolution.

If this trend continues during the next winter, then we have exceeded any short-term reactionary trend and the weather appears poised to continue to get colder going into the distant future. Socrates was projecting that the peak on this cycle aligned with the ECM 2015.75. This is a Longitudinal Cycle, not Transverse. That means peak to bottom varies. This short-term wave should be a 13-year decline from 2015 making it 2028 initially. After that, if we see colder winters beyond 2028, then the next low will be with the peak in the ECM 2032. There is a SERIOUS RISK that we are looking at the final low coming in during the period of 2046.

Previous article by Martin Armstrong: There Are Two Types of Pole Shifts