Baseball fans familiar with major league records remember Ty Cobb for his .366 lifetime batting average during the dead-ball era. Some may even remember that he held more than 90 baseball records.

During his career, Cobb was the idol of millions of fans and received bushels of letters asking advice about how children could get into the game and other baseball-related questions. He answered most letters and sometimes sent a pamphlet with pointers in it or a picture. When someone asked for his autograph, he invariably said how flattered he felt.

Cobb died in 1961, and the story of his life was quickly re-written to cast him as a belligerent, southern, racist monster. Leerhsen, in a talk at Hillsdale College in 2016, said that he also thought this was true, that is until he began to research sources that previous Cobb biographers had ignored. That research revealed a totally different Cobb than portrayed in books and a Hollywood movie after his death. 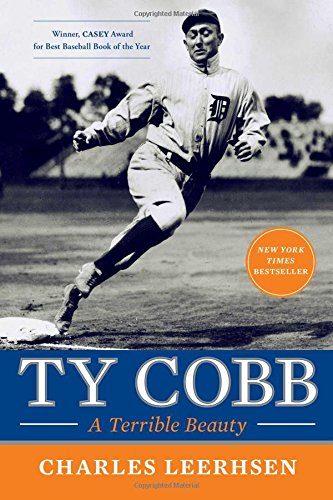 (The 1960s were when American history was being re-written so as to make the abolition of slavery the reason for Lincoln’s War. Those were years when Marxists from within U.S. universities, as prescribed by Antonio Gramci, began to use deconstructionist attacks on American societal standards and history, which continue unabated today. Because Ty Cobb was a white man and from Dixie, careless news reporters and authors rewrote his history, too and those that have since written about Cobb have repeated that misinformation.)

Leehrsen is a former editor of Sports Illustrated, People, and Us Weekly and former senior writer for Newsweek. He has also written for Money, Rolling Stone, Smithsonian, Esquire, and The New York Times Magazine. He has written several books, and his Ty Cobb book won the 2015 Casey Award for best baseball book that year. He is also an adjunct professor at City University of New York’s Graduate School of Journalism

He said, “I knew, going into the project, having been an editor at People magazine, that human beings take delight in the fact that the rich and famous are often worse and more miserable than they are. What I didn’t understand before was the power of repetition to bend the truth. In Ty Cobb’s case, the repetition has not only destroyed a man’s reputation, it has obliterated a real story that is more interesting than the myth.”

To research for the book, Leerhsen traveled to Detroit and Georgia and read contemporary newspaper reports about Cobb and many personal letters. He found Cobb was very different than reported since 1961 and criticized those that have created and repeated false and offensive reports.

Birth of the Post-Western World The Kavanaugh Confirmation Carnival