A study published earlier in 2018 should have made headlines everywhere, as it discovered historically high amounts of aluminum in autistic brains. The study was conducted by some of the worlds leading scientists in the field.

Five people were used in the study, four males and one female, all between the ages of 14-50. Each of their brains contained unsafe and high amounts of aluminum compared to patients with other diseases where high brain aluminum content is common, like Alzheimer’s disease, for example.

Of course, this caused people to downplay the study, citing a low sample group, but that’s not entirely a valid argument given the reason why this study was conducted. As cited in the study above, recent studies on animals, published within the past few years, have supported a strong connection between aluminum, and aluminum adjuvants used in human vaccinations, and Autism Spectrum Disorder (ASD.)

Studies have also shown that injected aluminum does not exit the body, and can be detected inside the brain even a year after injection. That being said, when we take aluminum in from sources such as food, the body does a great job of getting it out, but there is a threshold. It’s important to acknowledge that the aluminum found in the brain, could be due to the presence of aluminum adjuvants in vaccines. This latest study also identified the location of aluminum in these tissues, and where they end up. This particular study was done on humans, which builds upon, and still supports, the findings of the animal studies.

This is also important because the majority of studies that previously examined human exposure to aluminum have only used hair, blood and urine samples. The study also makes a clear statement regarding vaccines, stating that “Paediatric vaccines that include an aluminum adjuvant are an indirect measure of infant exposure to aluminum and their burgeoning use has been directly correlated with increasing prevalence of ASD.”

Aluminum, in this case, was found in all four lobes of the brain.

The aluminum content of brain tissues from donors with a diagnosis of ASD was extremely high (Table 1). While there was significant inter-tissue, inter-lobe and inter-subject variability the mean aluminium content for each lobe across all 5 individuals was towards the higher end of all previous (historical) measurements of brain aluminium content, including iatrogenic disorders such as dialysisencephalopathy[13], [15], [16], [17], [18], [19]. All 4 male donors had significantly higher concentrations of brain aluminum than the single female donor. We recorded some of the highest values for brain aluminum content ever measured in healthy or diseased tissues in these male ASD donors

We Know, And Have Known, Aluminum Is Not Safe, Yet We Ignore It

When we talk about the ‘safe’ amount of aluminum here, there is no such thing. Aluminum is extremely toxic to any biological process, it’s not meant for us which is why it stayed deep within the Earth until we took it out. It has no place within us, and that’s simply due to the fact that it causes nothing but havoc. This makes it odd that we would put them in vaccinations despite the fact that for 100 years there has been no appropriate safety testing.

Aluminum is an experimentally demonstrated neurotoxin and the most commonly used vaccine adjuvant. Despite almost 90 years of widespread use of aluminum adjuvants, medical science’s understanding about their mechanisms of action is still remarkably poor. There is also a concerning scarcity of data on toxicology and pharmacokinetics of these compounds. In spite of this, the notion that aluminum in vaccines is safe appears to be widely accepted. Experimental research, however, clearly shows that aluminum adjuvants have a potential to induce serious immunological disorders in humans.

The quote above comes from a study published in 2011, it’s 2018 now and we’ve come along way in our understanding. We are starting to see even more research confirming the statement above.

Almost every study you read regarding previous studies on aluminum adjuvants within vaccines emphasized how the nature of its bioaccumulation is unknown, and a serious matter. We now know that it goes throughout the body, into distant organs eventually ends up in the brain.

Another fairly recent study from 2015 points out:

Evidence that aluminum-coated particles phagocytozed in the injected muscle and its draining lymph notes can disseminate within phagocytes throughout the body and slowly accumulate in the brain further suggests that alum safety should be evaluated in the long term.(source)

The pictures below come from the recent 2018 study and show ‘bright spots’ that indicate heavy metals in the brain. 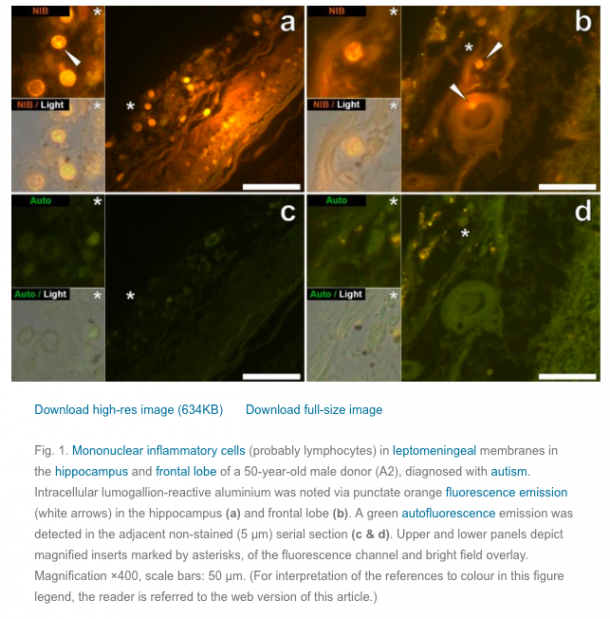 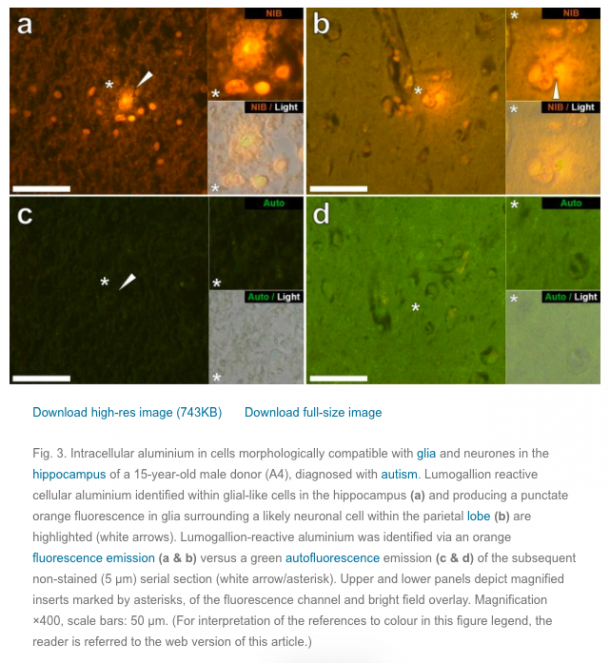 The more recent study discussed in this article is adding to that evidence. Below you can watch one of the most recent interviews with Dr. Eric Exly, one of the world’s foremost leading authors on the subject, and one of the authors of this most recent study. He is a Biologist (University of Stirling) with a Ph.D. in the ecotoxicology of aluminum. You can read more about his background here.

People need to understand that despite media bullying, it’s ok to question vaccine safety, and there is plenty of reason to. There are many concerns, and heavy metals are one of them. In fact, the persistence and abundant presence of heavy metals in our environment, foods and medications is a concern, one that has been the clear cause for a variety of health ailments, yet it’s one that’s hardly addressed by the medical industry.

You can detox from this with items such as Spirulina, and waters that contain a high Silica content. There are studies that show various methods of detoxing can be used to get this lodged aluminum, or some of it, out of your body, organs and brain. This is where educating yourself regarding the medicinal value of food and nutrition is a key Perhaps this can be a motivation to better your diet, especially if you have, are someone, or know someone with an ASD diagnosis.