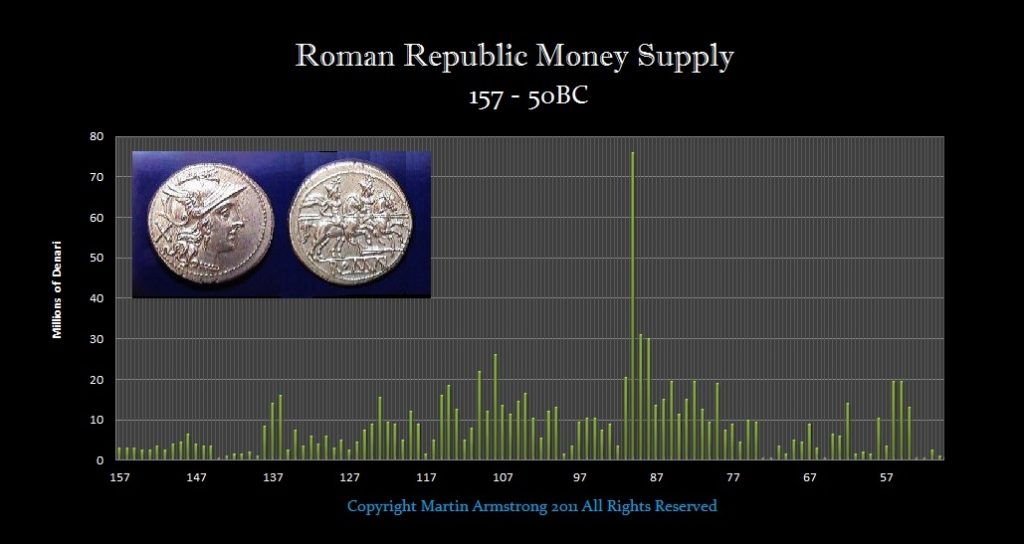 QUESTION: You said that Imperial Rome did not have a national debt nor central banks. Did Rome ever have debts that were not private? 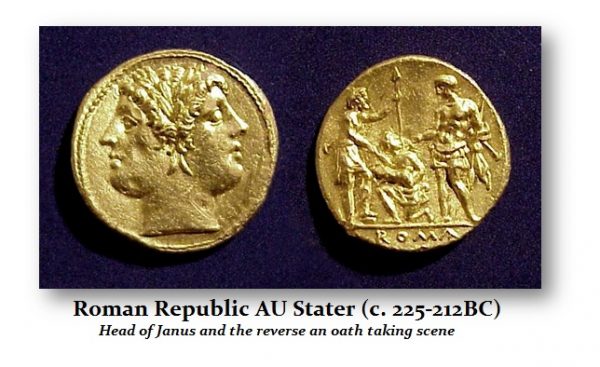 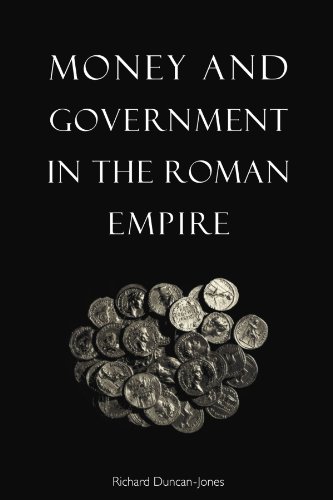 However, this concentration of wealth, which was akin to the United States after World War I and II, was absorbed by commercial expansion and investment in Gaul and Asia. A period of excessive concentration of money and large profits came to an end with the rise of the Social War of 91-88BC which was a war waged between the Roman Republic and several of the other cities in Italy (no taxation without representation), which prior to the war had been Roman allies for centuries. The war was begun by the Picentes because the Romans did not want to afford them Roman citizenship, thus leaving the Italian groups with fewer rights. The war resulted in a Roman victory and genocide against the Samnites. However, Rome granted Roman citizenship to almost all of its Italian allies, including the Samnites, to avoid another war. Therefore, we find that the debt crisis was correlated with a separatist movement – which we are beginning to see worldwide starting in Europe, but will eventually become a contagion in the United States as the conflict between left and right erupts after the November elections.

The Social War led to the complete state bankruptcy of the Roman State. We can see the dramatic rise in the money supply created during this time of war. This turmoil was then followed by the dictatorship of Sulla who then imposed an attempt to control the debt crisis capping interest rates at 12%. The previous legal rate was capped at 8.5%, but obviously, the market had exceeded that limit and Sulla had to confront that reality in 88BC. The debt crisis continued and then in 86BC, the government was compelled into default. This is when the Valerian Law came into play and this remitted 75% of all debts. The State debts were deflated on and reduced to 25%.

The Catalinian Conspiracy was thus an uprising of from the Debt Crisis. Political Corruption of the Republic Oligarchy was pervasive. The Catiline Conspiracy, that takes its name from Lucius Sergius Catiline (108-62 BC) who had unsuccessfully attempted to overthrow the Republic during which Marcus Tullius Cicero (106-43BC) was consul in 63 BC. Catiline served under Pompey’s father in the Social War of 89 BC and it is said he became such a zealot in Sulla’s proscriptions, he killed his own brother-in-law. He was a praetor in 68 BC, governor of Africa 67-66 BC, but could not run for election in 65 or 64 BC for consul when charges of extortion were pending which seemed to be intentionally designed to prevent him from running. Later, he was cleared of all charges.

Catiline was also against the oligarchy. Rumors were planted that he intended to kill the consuls and seize power in 65. However, there was never any evidence of this so-called First Catilinarian Conspiracy. It is significant, however, that there is even an allegation that predates the conflict. In 64 BC, Catiline stood for election against Cicero after all charges were dismissed, but lost. He stood for the elections again the following year, yet lost again.

Cicero was his opponent, and we must not forget that. Catiline was a popular man of the people and advocated for the cancellation of debt. He attracted the old victims of Sulla’s proscriptions who were dispossessed of their property. So we must understand that there was a brewing debt crisis in Rome and the oligarchy was determined to keep power at any cost. Cicero was counsel in 63 BC and he employed spies and informers making it very personal to attack Catiline. Whether Cicero even acted in an ethical manner is highly questionable when one resorts to spies and KGB informers tactics. Cicero on October 21st, 63 BC stood before the Senate and denounced Catiline charging him with treason and was granted what the Romans called the “ultimate decree” that was essentially a declaration of martial law – Dictatorship. 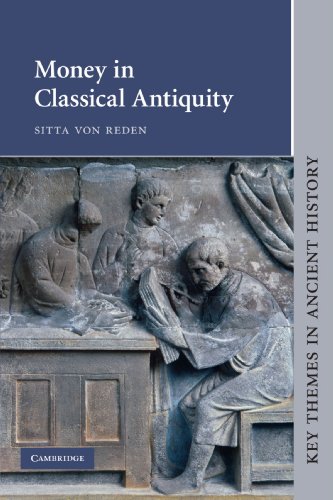 Catiline was quite popular. He had the support of Gaius Antonius and some of the tribunes were already following his line working for the cancellation of debts, as noted by historian Cassius Dio (Historia Romana 37,25,4). He was clearly sharing this idea with Crassus and Caesar and their view of the corruption within the oligarchy cannot be ignored. Cicero was the leader of a party known as the “Concord of the Orders” claiming to be the party of law and order. This was a life-long source of pride of Cicero. We must also understand that Catiline tried the constitutional approach and stood for elections against Cicero twice and lost. He clearly knew that the opposition included Pompey. Note keenly that the thrust was the cancellation of debts. The constitutional course of elections was always subject to bribery.

Catiline tried the constitutional approach. When Cicero accused him of being a threat to the Republic and guilty of treason, Catiline fled Rome on November 8th and joined a gathering of destitute veterans whom the oligarchy had never lived up to their promises of pensions. Despite the fact that the Senate handed the “ultimate decree” to Cicero, it does not appear from the contemporary accounts that the Senate fully believed in this Catiline
Conspiracy created by Cicero.

On December 3rd, Cicero’s informers and spies managed to get signed documents, or so they claimed, of others involved in the Catiline Conspiracy. Cicero won the Senate, arrested those, he alleged, signed the documents, and had them executed by December 5th and mobilized an army to attack Catiline. In January 62 BC, Catiline was attacked by Gaius Antonius Hybrida who commanded the Republican army and was killed in the battle at Pistoria. The victors portrayed those senators who sided with Catiline as the men who were facing bankruptcy. Cicero essentially eliminated any idea of revolution against corruption, and recast it as a bunch of losers who were bankrupts.