If the Bosnian pyramid of the sun is genuine, and there is very little doubt in my mind that it isn’t, then we are confronted with the highest structure in the world, and also the tallest pyramid in the world – Phillip Copens, author and pyramid expert.

A few years ago, a discovery in Bosnia made headlines (2005) when it was announced that the world’s largest pyramid had been found near the town of Visoko, northwest of the Bosnian city of Sarajevo.

What’s very interesting about pyramids is that they’re not only found in Egypt but are spread out throughout the world, supposedly built by civilizations that had absolutely no contact with each other and roamed the Earth at different time periods throughout human history.

What makes this massive undertaking so common across history?

Fascinating isn’t it? What is it about these structures that basically had the entire world, thousands of years ago, construct them? What do they represent? Our history books are far from a valid resource, there are so many new discoveries being made with regards to pyramids and ancient archaeology that our education system simply cannot keep up with it all and discoveries in this area are so controversial that if something astonishing is actually discovered and it challenges our belief systems, it’s instantly categorized as false, or ‘pseudoscience.’ 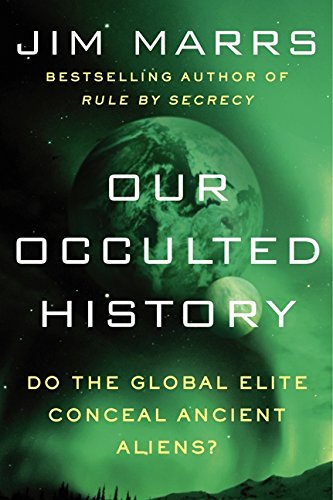 Thus, it becomes ridiculed and nobody will touch the subject in fear of their credibility. This is also a result of giving our consciousness away to external sources and not investigating these types of things for ourselves. This is especially seen when it comes to non-material science. No matter how many statistically significant results are published, or how many strange phenomena are observed in the lab, if it defies belief or we can’t explain it, it’s deemed as not real. In this sense, today, we have a lot of scientific dogma and a lot of discoveries that would change what we know about human history.

One researcher at the forefront of the Bosnian pyramid mystery is Semir Osmanagic, a Ph.D and a Bosnian born resident of the United States. He is a former Anthropology professor at the American University in Bosnia-Herzegovina and established a non-profit and non-government, Archaeological Park: Bosnian Pyramid of the Sun Foundation to pursue the excavation and geo-archaeological work. He is also a successful businessman.

Osmanagich has been admitted as a Foreign Member of the Russian Academy of Natural Sciences in Moscow, one of the most respected scientific institutions in the world with over twenty Nobel-prize winners. He is also a member of Croatian Academy of Science and Art for Diaspora based in Bazel (Switzerland) since 2015. This all came after the discovery of the Pyramid complex…

Below is a picture of the largest one. If it is what it appears to be, it’s the biggest stone structure in the shape of the pyramid on the Planet, with a height of 220 meters. 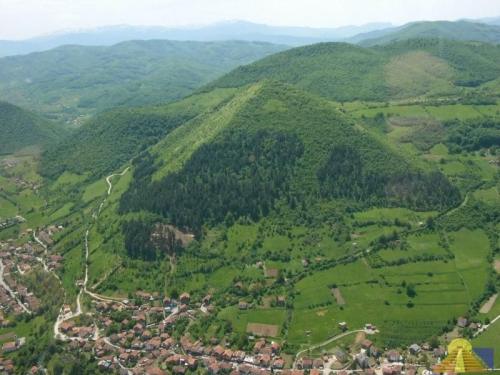 Outside of the Bosnian Pyramid, beneath the vegetation that has grown, are giant concrete conglomerate blocks. Below is a picture with Osmanagic standing next to them. It’s also noteworthy to point out the Bosnian Pyramid of the Moon, with its height of 190 meters (second biggest stone structure in the Bosnian Valley of the Pyramids, together with the Sun and Dragon pyramids form a perfect equilateral triangle. 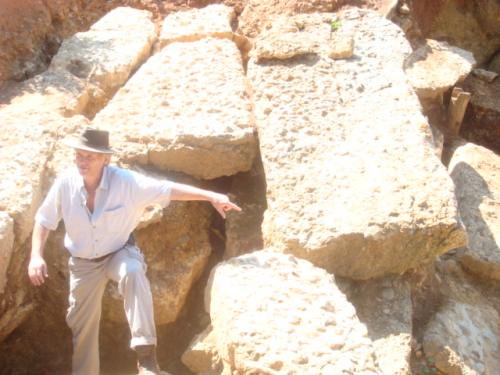 Another astonishing discovery below is a picture from Osmanagic of prehistorical underground tunnel networks that connects all 11 pyramids found within the complex, the tunnels run for tens of kilometres. 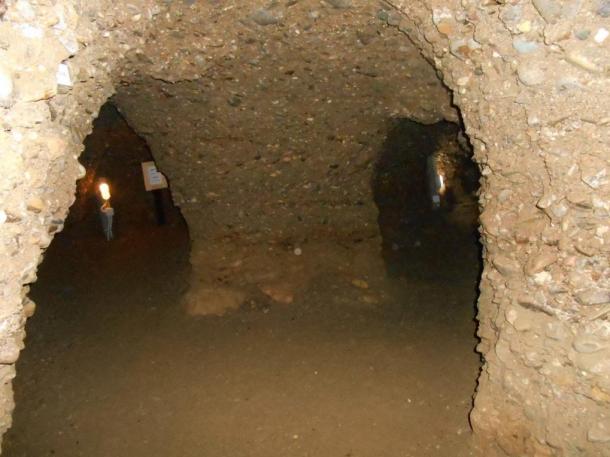 There are more coincidences and unexplained mathematical/geometrical/metaphysical anomalies you can learn about in his lecture linked at the bottom of this article.

This reminds me of the quiet discovery of liquid Mercury beneath a pyramid in South America. There is still so much undiscovered about pyramids, and to simply imply that they were used as tombs seems to be quite elementary. It seems that their explanation goes far beyond that, the mathematical precision we’ve seen from these pyramids around the world are astounding, and there are multiple coincidences that make one wonder if they were really just coincidences, like the fact that the speed of light, once plugged into google maps as a geographical coordinate, takes you right to the Great Pyramid at Giza.

Below is a picture of one of the Megalithic blocks in the underground tunnel network that have carved symbols that have been covered by conglomerate material for more than 30.000 years according to the radiocarbon dating. 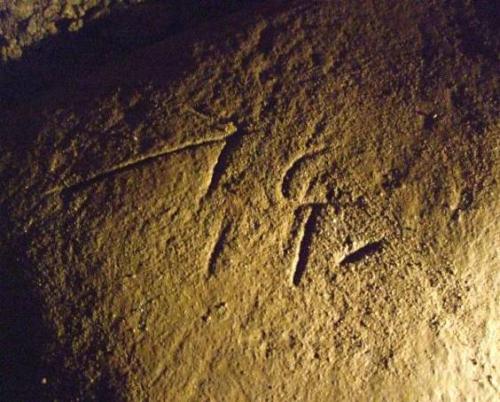 First International Scientific Conference about the Bosnian Valley of the Pyramids was held in Sarajevo (Bosnia-Herzegovina) in August 25-30, 2008

“Modern day archaeology and anthropology have nearly sealed the door on our imaginations, broadly interpreting the North American past as devoid of anything unusual in the way of great cultures characterized by a people of unusual demeanour. The great interloper of ancient burial grounds, the nineteenth century Smithsonian Institution, created a one-way portal, through which uncounted bones have been spirited. This door and the contents of its vault are virtually sealed off to anyone but government officials. Among these bones may lay answers not even sought by these officials concerning the deep past.” – Vine Deloria

These pyramids caused quite a stir in the historical/archaeological/anthropological community. As a result, a scientific conference was arranged in August 2008 with more than 50 experts from Egypt, Russia, China, Poland, Saudi Arabia, United Kingdom, Croatia, Austria, Montenegro and Bosnia. Out of this conference is where full support was given to establishing a Center for Pyramid studies in Bosnia. This wasn’t the only conference held on the matter, four more were held in 2012, 2013, 2014 and 2015 with more than 100 experts from various scientific backgrounds, concluding that the Bosnian Pyramid complex is indeed the oldest on the planet.

Here are their conclusions, quoted: 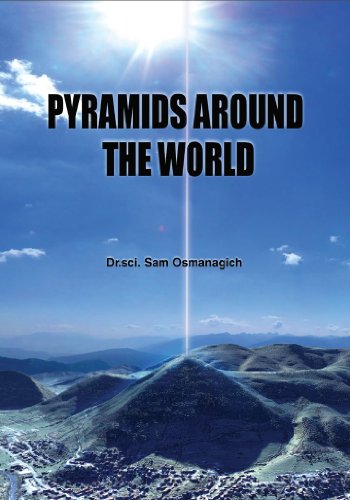 Work at the archaeological location “Bosnian Valley of the Pyramids“ in Visoko, Bosnia and Herzegovina, is an important geo-archaeological and epigraphical research that requires further multidisciplinary scientific research which should answer the origin of the Bosnian pyramidal hills and the extensive underground tunnel network as well as other archaeological sites in the vicinity;

ICBP Conference recommends that Second International Scientific Conference about the Bosnian Valley of the Pyramids should be held in Sarajevo in two years (2010) and gather experts in pyramid research from all over the world;

ICBP Conference introduce the initiative to establish Centre for Pyramid studies with headquarter in Sarajevo;

ICBP Conference recommends universities in Bosnia and Herzegovina to establish study at the graduate level for archaeology as a support to the reasearch project „Bosnian Valley of the Pyramids“.

Here is the source, as is also posted on the Osmanagics website linked earlier in the article.

Below is a list for a committee on the topic that came from the very first conference mentioned above, in 2008.

Osmanagic, as emphasized by researcher and author Jim Mars’ in Our Occulted History, has also been outspoken about radiocarbon dating that was conducted by the Institute of Physics of the Silesian Institute of Technology in Gliwice, Poland, which indicated that the pyramids at the site, the largest rising up to 722 feet, were constructed well before ten thousand years ago, which also makes it the oldest pyramid(s) in the world. This means that their construction might have happened well before the ones in ancient Egypt, or perhaps, simultaneously.

Here’s a quote from Osmanagic which also brings us to another topic, taken from Our Occulted History:

A team of physicists detected an energy beam coming through the top of the Bosnian Pyramid of the Sun. The radius of the beam is 4.5 meters with a frequency of 28 kHZ (kilohertz). The bean is continuous and its strength grows as it moves up and away from the pyramid. This phenomenon contradicts the known laws of physics and technology. This is the first proof of non-herzian technology on the planet. It seems that the pyramid-builders created a perpetual motion machine a long time ago and this “energy machine” is still working.

Almost everything they teach us about the ancient history is wrong: origin of men, civilization, pyramids. Homo sapiens is not a result of evolution and biologists will never find a “missing link,” because intelligent man is the product of genetic engineering. Sumerians are not the beginning of the civilized men, but rather the beginning of another cycle of humanity. And finally, original pyramids, most superior and oldest, were made by advanced builders who knew energy, astronomy ad construction better than we do.

Osmanagic claims that these were also the general conclusions that emerged out of these conferences that were held multiple times.

Scholars in this area are very well aware of other factors that might explain the construction of these pyramids, and again, these other factors instantaneously go against the belief system of many, which results in a complete lack of investigation or any further mainstream study, at all, simply because it defies belief, and changes a lot with regards to what we know about ancient history. The very fact that these pyramids might be 30,000 years old is one example of the belief destruction that would occur with regards to our knowledge of ancient civilizations, and the questions of who, what, where when and why.

Despite the fact that world-renowned scholars in multiple fields, including ancient archaeology and other related fields, all, without a doubt, have claimed to have witnessed one of the most important discoveries of our type (this pyramid complex), coverage of the finding within mainstream publications was pretty poor. Labelling the formations as natural, and not really presenting any of this information to the public. Instead, in the mainstream, it was somewhat ridiculed and hardly even acknowledged.

Ask yourself, what would happen if the world acknowledged this older that Egypt period complex? What would it mean? How much of what we thought we knew would completely change? The careers built on Egyptology would have to adjust. This means having to let go of old ideas. Ego’s are very challenged by this and this is part of the challenge. It’s a personal development and consciousness issue.

Anthony Harding, a president of the European Association of Archaeologists, is one example of such skepticism, who’s stated (Our Occulted History):

Since such claims obviously belonged to a fantasy world, I was inclined to ignore the affair..

Right off the bat, without any investigation at all, he instantly ridicules the idea, despite the fact that it was the conclusion of many other scholars in the area.

I called in at the hill of Visocica, on the edge of the town of Visoko, this solely in order to avoid the charge, already laid at our door, that we had condemned the project without seeing it for ourselves. As we expected, we saw areas of natural stone, with fissures and cracks; but no sign of anything that looked like archaeology.

The process of excavation is still ongoing, as it will take many years given the fact that this pyramid complex is so large and completely covered by natural vegetation and forest.

Again, this movement is not without criticism, as anything with such huge implications usually is…

Below is a lecture by Dr. Osmanagic if you’re interested in learning more and going into more detail about his discoveries.