In a New Book, Physicist Says Evidence of Human Role in Climate “Is Lacking”

In a new book from Physicist Ralph B. Alexander, Science Under Attack: The Age of Unreason, he sees  “abuses in science”. Excerpts:

Evidence and logic are lacking in many areas of public debate today on hot-button issues ranging from dietary fat to vaccination.

In Science Under Attack, Dr. Alexander shows how science is being abused, sidelined or ignored, making it difficult or impossible for the public to form a reasoned opinion about important issues. Readers will learn why science is becoming more corrupt, and also how it is being abused for political and economic gain, support of activism, or the propping up of religious beliefs.

Conventional scientific wisdom holds that global warming and consequent changes in the climate are primarily our own doing. But what few people realize is that the actual scientific evidence for a substantial human contribution to climate change is flimsy. It requires highly questionable computer climate models to make the connection between global warming and human emissions of carbon dioxide (CO2). 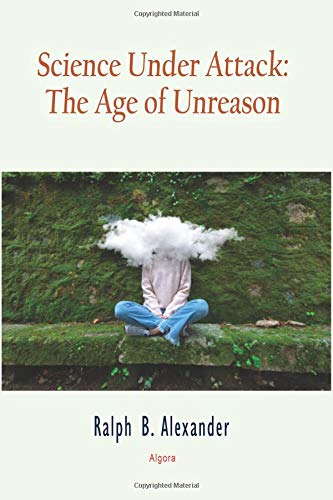 No proof warming is human caused The multiple lines of evidence which do exist are simply evidence that the world is warming, not proof that the warming comes predominantly from human activity. The supposed proof relies entirely on computer models that attempt to simulate the earth’s highly complex climate and include greenhouse gases as well as aerosols from both volcanic and man-made sources – but almost totally ignore natural variability. Models way off mark So it shouldn’t be surprising that the models have a dismal track record in predicting the future. Most spectacularly, the models failed to predict the recent pause or hiatus in global warming from the late 1990s to about 2014. During this period, the warming rate dropped to only a third to a half of the rate measured from the early 1970s to 1998, while at the same time CO2 kept spewing into the atmosphere.

Out of 32 climate models, only a lone Russian model came anywhere close to the actual observations. Not only did the models overestimate the warming rate by two or three times, they wrongly predict a hot spot in the upper atmosphere that isn’t there, and are unable to accurately reproduce sea level rise. Yet it’s these same failed models that underpin the whole case for catastrophic consequences of man-made climate change, a case embodied in the 2015 Paris Agreement. The international agreement on reducing greenhouse gas emissions – which 195 nations, together with many of the world’s scientific societies and national academies, have signed on to – is based not on empirical evidence, but on artificial computer models.

Only the models link climate change to human activity. The empirical evidence does not. Correlation is not causation Proponents of human-caused global warming, including a majority of climate scientists, insist that the boost to global temperatures of about 1.6 degrees Fahrenheit (0.9 degrees Celsius) since 1850 comes almost exclusively from the steady increase in the atmospheric CO2 level. They argue that elevated CO2 must be the cause of nearly all the warming because the sole major change in climate “forcing” over this period has been from CO2 produced by human activities – mainly the burning of fossil fuels as well as deforestation.