What Keeps Them up at Night

“Government has coddled, accepted, and ignored white collar crime for too long. It is time the nation woke up and realized that it’s not the armed robbers or drug dealers who cause the most economic harm, it’s the white collar criminals living in the most expensive homes who have the most impressive resumes who harm us the most. They steal our pensions, bankrupt our companies, and destroy thousands of jobs, ruining countless lives.” – Harry Markopolos, Madoff Whistleblower

The tenth anniversary of the Wall Street created financial catastrophe brought back some bittersweet memories this week. I wrote my first articles during the summer/fall of 2008 for Seeking Alpha. They included: Is The U.S Banking System Safe? (Aug 2008), The Great Consumer Crash of 2009 (Aug 2008), Looming Financial Catastrophe: A Real Inconvenient Truth (Aug 2008), Is Wachovia the Worst Run Bank in America (Sept 2008), The U.S. on the Precipice (Sept 2008), On Board the U.S.S. Titanic (Sept 2008), Our Coming Depression (Oct 2008), among others. I was pumping out 5,000 word articles every 2 or 3 days.

I was full of piss and vinegar. I was outraged by the actions taken by Paulson, Bernanke and Bush in bailing out criminal bankers with our money. This ensemble of accurate and acerbic articles led to requests for appearances on Glenn Beck’s CNN show, Neil Cavuto’s show, and several others. My need for my day job led me to turning down the invitations. I did several radio interviews, but kept a relatively low profile.

Ten years later, I’m running low on piss and vinegar. Irrationality reigns. Abnormal is the new normal. Delusions and new paradigms rule the day. During manias it is virtually useless to try and use facts and rational arguments against propaganda, misinformation and hype. The delusional will have to be clubbed like a baby seal once again to regain some sense of reality.

During the crisis in 2009, some guy kept badgering me with emails and phone calls to appear in his documentary about the financial crisis. He had been reading all my Seeking Alpha articles and my early Fourth Turning articles tying the financial collapse to the start of our current twenty-year Crisis. His name was Steve Bannon, a former Goldman Sachs banker and obscure documentary filmmaker. My 30 seconds of fame was appearing in his excellent documentary called Generation Zero, weaving the Financial Crisis into the Fourth Turning generational theory. I wonder whatever happened to that guy.

In the midst of the crisis I had the opportunity to attend a lecture/discussion where the Assistant Secretary of the Treasury provided his false narrative about the causes of the crisis and the taxpayer funded bailout of the criminal Wall Street banks. His goal was to convince the audience the government had the best interests of the common people in mind with their $700 billion injection into insolvent Wall Street banks, who took extreme risks and blew up the world. After his initial monologue the plan was to open it up to questions from the audience.

I had told a number of people I was going to ask a question that would make him uncomfortable. After he fielded a bunch of softball questions they handed the microphone to me. I asked him if the Federal government takeover of Fanny and Freddie were nothing more than a $200 billion backdoor bailout of the Wall Street banks, since the taxpayer was forced to backstop two insolvent zombies and not forcing Wall Street bankers to incur mortgage losses.

There was a murmur in the audience as they were shocked I would ask such a direct challenging question. He appeared stunned, paused, took a drink of water, and then proceeded to not answer my question by reciting some talking points and asking for the next question. It felt great making a government big shot uncomfortable and holding his feet to the fire. This was a time when I thought I could help change the world with my articles. My fire and brimstone posture has dimmed considerably in the years that followed, as my point of view has never gained mainstream traction.

It’s now ten years later and the government/Fed/Wall Street/MSM narrative has won the day. The account peddled by the Deep State and their corporate media mouthpieces about Paulson, Bernanke and Geithner saving the world by creating trillions of new debt to supplement the trillions in bad debt is the dominant view among the masses. A nine- year bull market, 0% interest rates, unlimited liquidity pumped into Wall Street banker veins by the heroin dealer Fed, and perpetual propaganda pumped prodigiously at people asking to be lied to, has produced illusions of wealth and delusions of normality. As long as the markets go up, the investing class has no interest in truth or consequences.

This past week I was able to attend another lecture/discussion recalling the 2008 crisis and assessing our current financial situation. The panel consisted of three hedge fund managers. Two of them are multi-billionaires and the third a multi-millionaire. The multi-millionaire was the president of UBS in 2008 and was in the room on that fateful weekend when Paulson and Bernanke gathered the Wall Street CEOs to try and save Lehman. Self interest and old grudges from the LTCM bailout led to failure and Lehman’s bankruptcy on Monday.

That event triggered the next phase in the meltdown initiated by massive Wall Street fraud. As the panelists agreed, all trust between banks evaporated. No one knew whether their counter-parties would be solvent tomorrow. The lack of trust created a liquidity crisis, and when the Reserve Money Market broke the buck on September 16, all hell broke loose. Every financial crisis is driven by fear and lack of liquidity, resulting in plunging prices and a rapid evaporation of faux wealth.

The two billionaires were running hedge funds in 2008 and experienced significant losses, but they had been building cash over the summer and hedged themselves to avert disaster. They pointed out that debt markets are always the canary in the coalmine. Their hedge funds are concentrated in the debt markets and they saw warning signals well before the Lehman collapse.

Their bankruptcy didn’t cause the crisis. It was just the triggering event to knock over the debt dominoes lined up over the previous six years due to the easy money policies of the Fed, lack of regulation by the Fed, blatant criminality by mortgage issuers, idiocy and cowardice of the rating agencies, and the speculative frenzy embraced by greedy home buyers and self-styled stock market gurus using margin accounts.

These investing titans were clearly scared at the time, but they chose not to pontificate about how Paulson and Bernanke saved their Wall Street asses while throwing Main Street under the bus. Nine million foreclosures later, with virtually no real wage gains in nine years, money market funds paying .15%, a national debt 122% higher (versus 38% increase in GDP), and global government debt $63 trillion higher (triple 2008 levels), we again stand on the precipice of another crisis created by the Fed, Wall Street, and your benevolent government.

Near the end of the discussion they were asked what keeps them up at night. One of them revealed his political view, while the billionaires kept their views to themselves. He said Trump’s actions are what keeps him up at night. He also defended Dodd Frank and was a key financial advisor and fundraiser for Obama for eight years. I took his standard left- wing viewpoint with a grain of salt.

The other two gentlemen were more thoughtful and provided valuable insight into what is coming our way. According to one of the billionaires (he was looking at bug-out real estate in Queensland in 2009), the first potential trigger is Italy. They are the 3rd largest economy in the EU. The debt market has issued a warning, with yields blowing out. Political chaos, massive debt, weakening economy, and animosity towards Brussels over migrants has created a perfect storm. An Italian debt default would trigger a global contagion. 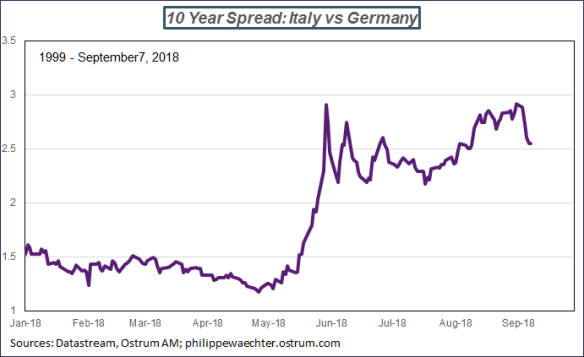 The worry that got my attention was echoed by the second billionaire. When two billionaires with their own money invested in their own funds have the same major concern, it is time to take note. These guys are active investors. They attempt to add alpha through investment selection. Their biggest worry is the epic shift of investment flows from active management to passive management.

Having over 40% of all the money in the market being managed by computers gives a huge boost to returns during a bull market. But when the selling starts, computers don’t think. Their algorithms will automatically sell and flash crashes will abound. Once fear replaces greed, the wave of computer selling will overwhelm those trying to actively manage their portfolios. Then the record level of margin debt will result in margin calls and a further wave of selling. The clueless 401k investor will see their retirement savings sliced by 40% in the blink of an eye. 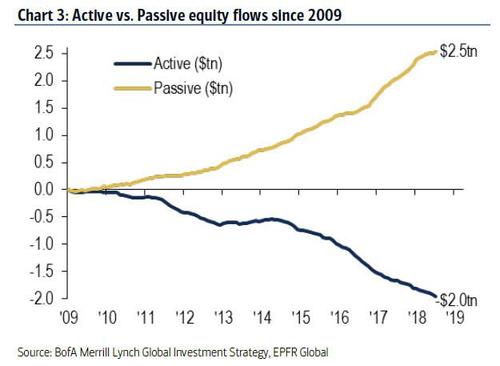 It’s not a matter of if, but when the tsunami of selling will make the 2008 crisis look like a walk in the park. There are numerous other potential triggers which could cause or exacerbate the next financial crisis. Excess leverage always creates catastrophe. When you have $8 trillion of emerging market debt, a rising dollar, rising interest rates, and record low risk premiums, the fuse on the fireworks has already been lit. 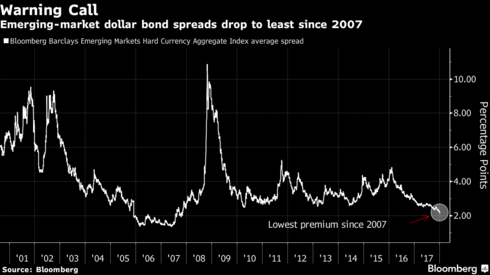 We know the 2008 crisis was primarily driven by the implosion of subprime mortgage debt and derivatives of mass destruction tied to those mortgages. Talking heads on CNBC and spokes-models on Bloomberg are nonchalant about record high home prices because the amount of subprime mortgages is much lower than 2008. What they fail to acknowledge is the immense issuance of subprime auto, credit card, corporate, and student loan debt to borrowers incapable of repaying that debt. 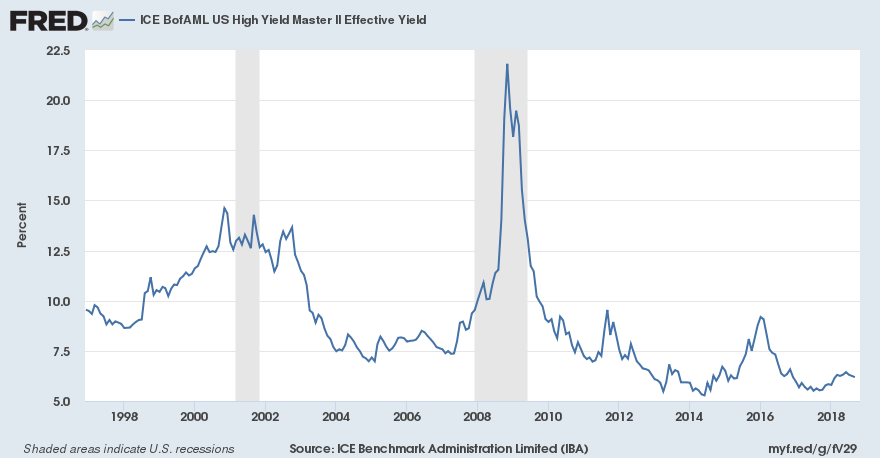 Booms built upon a foundation of dodgy debt, easy money, extremely low interest rates, and false narratives peddled by the Deep State propaganda machine, always collapse. There is no avoiding the consequences of the insane “solutions” to the last debt induced crisis. It doesn’t matter what trigger induces the disintegration of these delusions of debt.

The masses are as unprepared for the onslaught of consequences from the unholy trinity of debt, civic decay and global disorder as they are for three category 5 hurricanes bearing down on their homes. Fourth Turnings always intensify and reach a crescendo of pain before a chance at redemption can arise. The inevitable financial collapse will produce a conflagration not anticipated by a population plagued by a terminal case of normalcy bias. This is what keeps me up at night.

“In retrospect, the spark might seem as ominous as a financial crash, as ordinary as a national election, or as trivial as a Tea Party. The catalyst will unfold according to a basic Crisis dynamic that underlies all of these scenarios: An initial spark will trigger a chain reaction of unyielding responses and further emergencies. The core elements of these scenarios (debt, civic decay, global disorder) will matter more than the details, which the catalyst will juxtapose and connect in some unknowable way. If foreign societies are also entering a Fourth Turning, this could accelerate the chain reaction. At home and abroad, these events will reflect the tearing of the civic fabric at points of extreme vulnerability – problem areas where America will have neglected, denied, or delayed needed action.” – The Fourth Turning – Strauss & Howe

Previous article by Jim Quinn: A Nation Built on Lies

The United States Is a Dead Man WalkingWill Monsanto’s Loss Result In Less Poison in Our Food?