A review of Copperheads: The Rise and Fall of Lincoln’s Opponents in the North by Jennifer L. Weber (Oxford University Press, 2007).

They say a picture is worth a thousand words. In this case it is worth much more: 217 pages of them. The text comes wrapped in a handsome dust jacket, colored black and gold and featuring an arresting editorial cartoon from the War. In it, a stern-visaged but comely maiden stands her ground, brandishing a sword in one hand and a shield emblazoned with the motto “UNION” in the other; a white star shines from her forehead, symbolizing divinity. She is menaced by three poisonous copperhead snakes, whose human heads—gaunt-faced, long-haired, and topped by a flat-brimmed hat—are drawn to look like the stereotypical Southerner.

There is tension and danger but also the implication of resolution: the goddess of liberty shall lop off the heads of the traitorous foe—Northerners who favor peace. 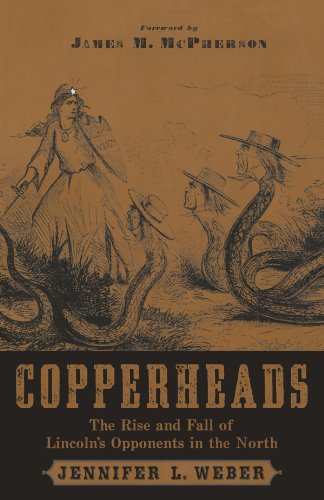 A study of the Northern Peace Democrats is long overdue. Unfortunately, what we have here is a nationalistic melodrama masquerading as a work of scholarship. One hundred and forty years after the shooting stopped, historians still cannot resist keying their narration to the music of Julia Ward Howe.

One of the most important qualities of an historian is empathy, the ability to sympathize with the predicament and understand how the world appeared to different groups of people in the past. I cannot think of a better example than Daniel Walker Howe’s The Political Culture of the American Whigs (1979), which treats with sympathy and understanding, and without judgment, the rich and varied thought of the various groups that made up the party: the entrepreneurs, the evangelicals, the reformers, the conservatives, and the Southerners.

By contrast, Professor Jennifer Weber, who teaches at the University of Kansas, regards her subjects as reactionary reprobates who richly deserved the oblivion into which they were thrown after the War. Clement L. Vallandigham, the antiwar Ohio congressman and 1863 gubernatorial candidate, was an “ideologically driven outlaw,” whose “return to Ohio is nearly as amusing as his departure.” (Note the use of the present tense.) The man had been arrested in his home at midnight by federal soldiers, tried before a military commission, found guilty, and, by order of the president, banished to the Confederacy. Vallandigham later had to wear a disguise while sneaking across the U.S. border from Canada. She finds that very “amusing.”

Weber treats the Peace Democrats with relentless sarcasm and disrespect. One antiwar editor is described as “working himself into a rhetorical lather’ (i.e., foaming at the mouth), others are “apoplectic,” “blinkered by ideology,” or deluded by “utopian fantasies.” “The Copperheads lacked Lincoln’s understanding of the times,” and were deaf to his arguments, “powerful though they were.” Never does she do them the justice of fairly or accurately describing their thought

Who Does America Belong to? Paramount Owes America an Apology