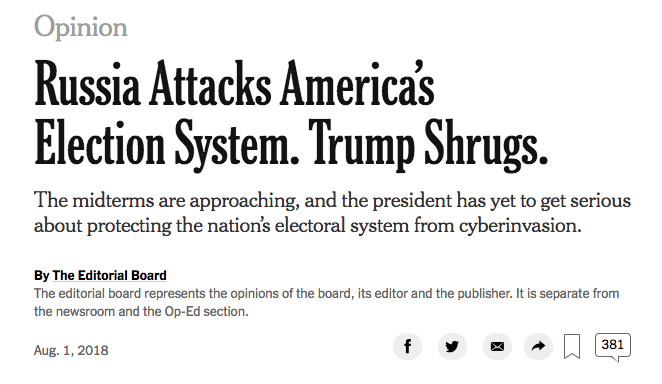 The Guardians of the Galaxy at National Public Radio were beside themselves Wednesday night reporting that “the lights are blinking red for a 2018 election attack by Russia.” Well, isn’t that an interesting set-up? In effect, NPR is preparing its listeners in advance to reject and dispute the coming midterm election if they’re not happy with the results. Thus continues America’s institutional self-sabotage, with the help of a news media that’s become the errand boy of the Deep State.

What do I mean by the Deep State? The vested permanent bureaucracy of Washington DC, and especially its vastly overgrown and redundant “Intel Community,” which has achieved critical mass to take on a life of its own within the larger government, makes up its own rules of conduct, not necessarily within the rule of law, and devotes too much of its budget and influence defending its own prerogatives rather than the interests of the nation.

Personally, I doubt that President Putin of Russia is dumb enough to allow, let alone direct, his intel services to lift a finger “meddling” in the coming US midterm election, with this American intel behemoth vacuuming every digital electron on earth into the NSA’s bottomless maw of intercepted secrets. Mr. Putin must have also observed by now that the US Intel Community is capable of generating mass public hallucinations, to the beat of war-drums, and determined not to give it anything to work with. That’s my theory about what Russia is up to. If you have a better one, let’s hear it?

Another curious incident played out on CNN earlier this week when Max Boot, senior fellow at the Council of Foreign Relations (the Deep State faculty lounge) faced off against Russia historian/scholar Stephen F. Cohen of Princeton on Anderson Cooper’s prime-time show. “Russia is attacking us right now according to Trump’s own Director of National Security (Daniel Coates)!” Mr. Boot shrilly declared.

“I’ve been studying Russia for forty-five years,” Mr. Cohen replied, “I’ve lived in Russia and I’ve lived here. If Russia was attacking us, we would know it.”

“You’ve consistently been an apologist for Russia in those last 45 years,” Mr. Boot riposted.

“I don’t do defamation of people; I do serious analysis of serious national security policy,” Mr. Cohen rejoined. “When people like you call people like me ‘apologists for Russia’ because we don’t agree with your analysis, you are criminalizing diplomacy and detante and you are the threat to national security.”

“You’re apologizing for Russia as we speak,” Mr. Boot inserted.

“This is low-level stuff that went on,” Mr. Cohen said. “It is not 9/11. It is not Pearl Harbor. It is not Russian paratroopers descending on Washington. This kind of hyperbole, ‘an attack on America,’ suggests that we need to attack Russia….I think Mr. Boot would have been happy if Trump had waterboarded Putin at the summit and made him confess….”

Notice how astonished Mr. Cooper was to hear the view that Russia did not attack the US. It’s inconceivable in the universe-as-known-to-CNN, so potent is the hallucination there that even the water-cooler is bubbling with angst. Oh, and by the way, do any of you readers actually know how the duties of the Director of National Security (Mr. Coates) differ from the Director of the CIA (Gina Haspel) or the Director of the NSA (Paul M. Nakasone)?

In case you are mystified as to why a considerable portion of the public is disgusted with the news media, it is as simple as this: they appear to be an instrument of that permanent government bureaucracy, doing its bidding, defending its criminal mischief, and covering up its dishonesty. Proof of that is the media’s conspicuous inattention to the now well-documented political depravity in another arm of the Intel Community, the FBI — a much more compelling story of villainy than 13 Russian Facebook trolls and the alleged (still unproven) hacking of the DNC.

Donald Trump, aka the Golden Golem of Greatness, may be an unappetizing and embarrassing president. But is the Deep State ready to start a world war just to shove him offstage? Or burn down the constitution? While CNN stands by with Jeri-cans of gasoline?

South Africa Is on The Road to BarbarismTommy Robinson Abused, Tortured