The heart and soul of the American antiwar movement participated in the sold-out Ron Paul Institute of Peace and Prosperity’s 2018 “Media and War” Conference on August 17 held outside Washington, D.C. Some alternative media voices have abandoned or toned down their antiwar reporting to support President Trump. The “progressive left” has abandoned its opposition to war, for instance, activists commemorating the 1968 Vietnam War protests at the Democratic National Convention have diverted the issue of peace to racism, climate change, poverty, and police violence.

Dr. Paul continues to be a courageous leader advocating a non-interventionist foreign policy and peace as the path to prosperity, bringing together a coalition of voices from the left and right. Pro-peace libertarians and classical liberals travelled from all over the U.S. to the event to listen to speakers explain how the controlled official media promotes war, how the deep state silences voices for peace, while encouraging citizens to attempt to overcome these obstacles of propaganda and censorship.

Global peace leader Dr. Paul, in his keynote address, denounced the “shrewd” and fascist tactic of the government controlling radio, TV and now social media through licensing. “If you have rigid beliefs you must be neutralized,” he said. “They want people who don’t believe in anything,” which is utilitarianism. We are witnessing, he said, “a war against the American people” but “it is your life and your right to use your liberties as you see fit. Individual rights come from the Creator in a natural way.” The popularity of socialism is propaganda promoted by the mass media, he said. “You can’t combat an idea whose idea has come.” He explained his support for competing currencies, gold and cryptocurrencies utilizing the rule of no fraud while ending the Federal Reserve and eliminating legal tender laws. The purpose of the government should be “the protection of liberty.” If a civil war broke out in America, it is not necessarily true the conservatives would have more guns, he said, as “The liberals lie about everything.” The very wealthy take care of themselves, he said, and the true isolationists are the warmongers. When he ran for president in 2008, he received more funds from the military than all other Republican candidates combined. “We don’t need a draft to pursue a non-interventionist foreign policy.” The U.S. is broke, and the printing press is falsely keeping the economy going. Sanctions are dangerous. The market is tough, the consumer is king, he said, and the government shouldn’t bail anyone out. The instincts of the people are for peace, he said, because it creates prosperity. “We need to learn the tricks of the PR trade,” he said. More prisoners are in jail as a result of drug law violations than all other inmates combined, he said, calling for the legalization of marijuana. Civilization must get to the point where technology advances to where it is not used to kill each other in wars. “No way do I think I’m sacrificing anything,” he said. “I love encouraging others and talking to young people. Get involved. It is tough work but do it and have fun.” 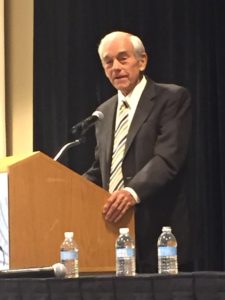 Daniel McAdams, the executive director of the Institute, was acknowledged by Dr. Paul for his dedication and hard work organizing the conference. McAdams, who co-hosts the Liberty Report with Dr. Paul and who recently had his Twitter account suspended and then reinstated, opened the event and introduced the speakers. 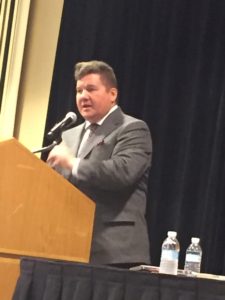 Col. Lawrence Wilkerson, former chief of staff to Secretary of State Colin Powell and professor at the College of William and Mary, said he was working on a House Continuing Resolution 81 and Senate Special Resolution 54 that states the war in Yemen is unconstitutional based on the U.S. Constitution. “It is the most brutal war probably on face of the earth,” he said, “a first-class humanitarian disaster, unheard of in terms of mainstream media.” He said recently with U.S. munitions and intelligence, the Saudis hit school bus and killed 50 children. “This is routine for Saudi-UAE effort and the U.S. is supporting them.” The U.S. has special forces in Yemen assisting the ground effort, along with munitions, intelligence and air support, he said. He argued the U.S. has no grand strategy for all its wars. “No external threat can allow us to change our values. We are doing it to ourselves.” He also said the US military effort in Afghanistan has nothing to do with fighting terrorists. 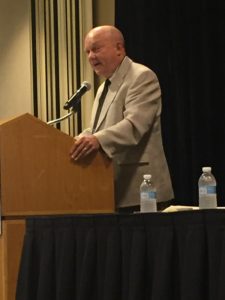 John Whitehead, founder and president of the Rutherford Institute, forcefully stated “The battlefield is here” in America with all the surveillance and perpetual war, and that the U.S. is a police state with militarized police nationwide, 175,000 armed federal agents, and 80,000 SWAT teams smashing down people’s doors, often in the wrong house. The DHS conducts threat assessments of many American homes, he said, and “Everything you do is being watched.” He advised American citizens to take control at the local level and to know your rights. Public schools don’t teach the First Amendment, but you can teach your kids, he said. “The only way to preserve free speech is with more free speech.” 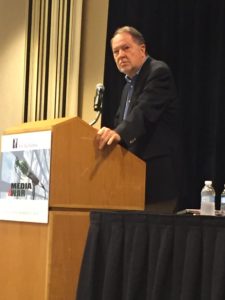 Caitlin Johnstone, a self-described “rogue journalist focusing on war, peace, coalition-building, and ruffling establishment feathers,” spoke via live video. She stands out from the so-called progressives who are silent on war. “Those who control the narrative control the world,” she said. “Trust in the media is at an all-time low and the ruling power establishment is scared,” she said, so they are trying to shut up alternative views such as Alex Jones, Julian Assange, and Peter Van Buren. The mass media is trying to manufacture consent, she said, by quieting voices. Her Twitter account was suspended but then reinstated as a result of pressure from her 33k followers. These tech giants have deep ties to and act as contractors to the government she pointed out. “We know where this is going. People will seek out what is banned,” she said. “This is visible totalitarianism, but the end game is they can’t rule what they can’t control. They must maintain seriousness, so we must laugh at them. We all woke up from the matrix and  there is a grassroots rebellion” with the fight now at the town square of social media. She advised attendees to be activists: speak the truth, and since content is key on social media, to start a blog, create a video or a mime.