The Most Intolerant Wins: The Dictatorship of the Small Minority

(Chapter from Skin in the Game)

The best example I know that gives insights into the functioning of a complex system is with the following situation. It suffices for an intransigent minority –a certain type of intransigent minorities –to reach a minutely small level, say three or four percent of the total population, for the entire population to have to submit to their preferences. Further, an optical illusion comes with the dominance of the minority: a naive observer would be under the impression that the choices and preferences are those of the majority. If it seems absurd, it is because our scientific intuitions aren’t calibrated for that (fughedabout scientific and academic intuitions and snap judgments; they don’t work and your standard intellectualization fails with complex systems, though not your grandmothers’ wisdom).

The main idea behind complex systems is that the ensemble behaves in way not predicted by the components. The interactions matter more than the nature of the units. Studying individual ants will never (one can safely say never for most such situations), never give us an idea on how the ant colony operates. For that, one needs to understand an ant colony as an ant colony, no less, no more, not a collection of ants. This is called an “emergent” property of the whole, by which parts and whole differ because what matters is the interactions between such parts. And interactions can obey very simple rules. The rule we discuss in this chapter is the minority rule.

The minority rule will show us how it all it takes is a small number of intolerant virtuous people with skin in the game, in the form of courage, for society to function properly. 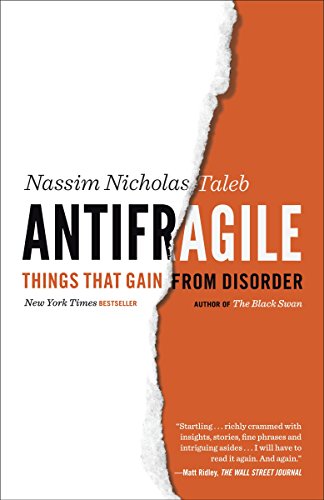 This example of complexity hit me, ironically, as I was attending the New England Complex Systems institute summer barbecue. As the hosts were setting up the table and unpacking the drinks, a friend who was observant and only ate Kosher dropped by to say hello. I offered him a glass of that type of yellow sugared water with citric acid people sometimes call lemonade, almost certain that he would reject it owing to his dietary laws. He didn’t. He drank the liquid called lemonade, and another Kosher person commented: “liquids around here are Kosher”. We looked at the carton container. There was a fine print: a tiny symbol, a U inside a circle, indicating that it was Kosher. The symbol will be detected by those who need to know and look for the minuscule print. As to others, like myself, I had been speaking prose all these years without knowing, drinking Kosher liquids without knowing they were Kosher liquids.

A strange idea hit me. The Kosher population represents less than three tenth of a percent of the residents of the United States. Yet, it appears that almost all drinks are Kosher. Why? Simply because going full Kosher allows the producer, grocer, restaurant, to not have to distinguish between Kosher and nonkosher for liquids, with special markers, separate aisles, separate inventories, different stocking sub-facilities. And the simple rule that changes the total is as follows:

A Kosher (or halal) eater will never eat nonkosher (or nonhalal) food , but a nonkosher eater isn’t banned from eating kosher.

Or, rephrased in another domain:

Granted, sometimes, in practice, we hesitate to use the bathroom with the disabled sign on it owing to some confusion –mistaking the rule for the one for parking cars, under the belief that the bathroom is reserved for exclusive use by the handicapped.

Someone with a peanut allergy will not eat products that touch peanuts but a person without such allergy can eat items without peanut traces in them.

Which explains why it is so hard to find peanuts on airplanes and why schools are peanut-free (which, in a way, increases the number of persons with peanut allergies as reduced exposure is one of the causes behind such allergies).

Let us apply the rule to domains where it can get entertaining:

An honest person will never commit criminal acts but a criminal will readily engage in legal acts.

Let us call such minority an intransigent group, and the majority a flexible one. And the rule is an asymmetry in choices.

Two more things. First, the geography of the terrain, that is, the spatial structure, matters a bit; it makes a big difference whether the intransigents are in their own district or are mixed with the rest of the population. If the people following the minority rule lived in Ghettos, with their separate small economy, then the minority rule would not apply. But, when a population has an even spatial distribution, say the ratio of such a minority in a neighborhood is the same as that in the village, that in the village is the same as in the county, that in the county is the same as that in state, and that in the sate is the same as nationwide, then the (flexible) majority will have to submit to the minority rule. Second, the cost structure matters quite a bit. It happens in our first example that making lemonade compliant with Kosher laws doesn’t change the price by much, not enough to justify inventories. But if the manufacturing of Kosher lemonade cost substantially more, then the rule will be weakened in some nonlinear proportion to the difference in costs. If it cost ten times as much to make Kosher food, then the minority rule will not apply, except perhaps in some very rich neighborhoods.

Muslims have Kosher laws so to speak, but these are much narrower and apply only to meat. For Muslim and Jews have near-identical slaughter rules (all Kosher is halal for most Sunni Muslims, or was so in past centuries, but the reverse is not true). Note that these slaughter rules are skin-in-the-game driven, inherited from the ancient Eastern Mediterranean [discussed in Chapter] Greek and Semitic practice to only worship the gods if one has skin in the game, sacrifice meat to the divinity, and eat what’s left. The Gods do not like cheap signaling.

Now consider this manifestation of the dictatorship of the minority. In the United Kingdom, where the (practicing) Muslim population is only three to four percent, a very high number of the meat we find is halal. Close to seventy percent of lamb imports from New Zealand are halal. Close to ten percent of the chain Subway carry halal-only stores (meaning no pork), in spite of the high costs from the loss of business of nonpork stores. The same holds in South Africa where, with the same proportion of Muslims, a disproportionately higher number of chicken is Halal certified. But in the U.K. and other Christian countries, halal is not neutral enough to reach a high level, as people may rebel against forceful abidance to other’s religious norms. For instance, the 7th Century Christian Arab poet Al-Akhtal made a point to never eat halal meat, in his famous defiant poem boasting his Christianity: “I do not eat sacrificial flesh”. (Al-Akhtal was reflecting the standard Christian reaction from three or four centuries earlier — Christians were tortured in pagan times by being forced to eat sacrificial meat, which they found sacrilegious. Many Christian martyrs starved to death.)

One can expect the same rejection of religious norms to take place in the West as the Muslim populations in Europe grows.

So the minority rule may produce a larger share of halal food in the stores than warranted by the proportion of halal eaters in the population, but with a headwind somewhere because some people may have a taboo against Moslem food. But with some non-religious Kashrut rules, so to speak, the share can be expected converge to closer to a hundred percent (or some high number). In the U.S. and Europe, “organic” food companies are selling more and more products precisely because of the minority rule and because ordinary and unlabeled food may be seen by some to contain pesticides, herbicides, and transgenic genetically modified organisms, “GMOs” with, according to them, unknown risks. (What we call GMOs in this context means transgenic food, entailing the transfer of genes from a foreign organism or species). Or it could be for some existential reasons, cautious behavior, or Burkean conservatism –some may not want to venture too far too fast from what their grandparents ate. Labeling something “organic” is a way to say that it contains no transgenic GMOs.

In promoting genetically modified food via all manner of lobbying, purchasing of congressmen, and overt scientific propaganda (with smear campaigns against such persons as yours truly), the big agricultural companies foolishly believed that all they needed was to win the majority. No, you idiots. As I said, your snap “scientific” judgment is too naive in these type of decisions. Consider that transgenic-GMO eaters will eat nonGMOs, but not the reverse. So it may suffice to have a tiny, say no more than five percent of evenly spatially distributed population of non-genetically modified eaters for the entire population to have to eat non-GMO food. How? Say you have a corporate event, a wedding, or a lavish party to celebrate the fall of the Saudi Arabian regime, the bankruptcy of the rent-seeking investment bank Goldman Sachs, or the public reviling of Ray Kotcher, chairman of Ketchum the public relation firm that smears scientists and scientific whistleblowers on behalf of big corporations. Do you need to send a questionnaire asking people if they eat or don’t eat transgenic GMOs and reserve special meals accordingly? No. You just select everything non-GMO, provided the price difference is not consequential. And the price difference appears to be small enough to be negligible as (perishable) food costs in America are largely, about up to eighty or ninety percent, determined by distribution and storage, not the cost at the agricultural level. And as organic food (and designations such as “natural”) is in higher demand, from the minority rule, distribution costs decrease and the minority rule ends up accelerating in its effect.

Another example: do not think that the spread of automatic shifting cars is necessarily due to the majority of drivers initially preferring automatic; it can just be because those who can drive manual shifts can always drive automatic, but the reciprocal is not true [1].

The method of analysis employed here is called renormalization group, a powerful apparatus in mathematical physics that allows us to see how things scale up (or down). Let us examine it next –without mathematics.