Signature in the Cell and Intelligent Design

An Introduction to Protracted Desperation

A question that never ceases to fascinate is that of how life originated, and how and why it has progressed as it seems to have. The official story and de rigueur explanation is that that life came about through spontaneous generation from seawater. Believing this is the mark of an Advanced Person, whether one has the slightest knowledge of the matter. In academia researchers have been fired and careers ruined for questioning it. If you doubt that scientists can be ideological herd animals, as petty, intolerant, vindictive, and backstabbing as professors, read Heretic, by the PhD biotechnologist and biochemist Matti Leisola, who fell on the wrong side of the herd. Ths establishment’s continuing effort to stamp out heresy looks increasingly like a protracted desperatoon.

The other, more intuitive view of life is that of Intelligent Design. When one sees an immensely complicated system all of whose parts work together with effect and apparent purpose, such as an automobile or a cell, it is natural to think that someone or something designed it. There is much evidence for this, certainly enough to intrigue those of open mind and intelligence. Those of a philosophic bent may note that Freud, Marx, and Darwin are equally relics of Nineteenth Century determinism, and that Darwin wrote when almost nothing was known about much of biology. Note also that the sciences are tightly constrained and limited by their premises, unable to think outside of their chosen box.  Others, wiser, wonder whether there are not more things in heaven and earth.

The theory of ID is seen by the official story as a form of biblical Creationism of the sort holding that the world was created in 4004 BC. This is either wantonly stupid or deliberately dishonest.  There is of course no necessary connection between ID and Buddhism, Islam, or the Cargo Cult. There are scientists who are not proponents of ID but simply see that much of official Darwinism does not make sense or comport with the evidence. Some IDers are Christians, which does not affect the validity, or lack of it, orf what they say. To judge by my mail, many people have serious doubts about the official explanation without being zealots of anything in particular.

(For what it is worth, I am myself a complete agnostic. Faith and atheism both seem to me categorical beliefs in something one doesn’t know. ID certainly provides no support for the existence of a loving Sunday School god, given that in almost all places and all times most people have lived in misery and died in agony.)

To me, though, things look designed. By what, I don’t know.

Two difficulties affect the presentation of ID to the public.  First, most of us have been subjected to thousands of hours of vapid “science” programs and mass-market textbooks. These tell us  that doubters must be snake-handling forest Christians with three teeth. The second is that following the argument requires more technical grasp than most have. Trying to explain the question to a network-news audience is hopeless and makes those attempting it seem foolish.

Yet discussion has to be fairly technical to avoid degenerating into vague generalities. Following many of the authors requires familiarity with, or the ability to pick up quickly, such things as the nature of  information, both in the Shannon sense of a reduction in uncertainty and of specified information as found in DNA and computer code. Some experience of programming helps as does a minor familiarity with organic chemistry and a nodding aquaintance with early paleontology. 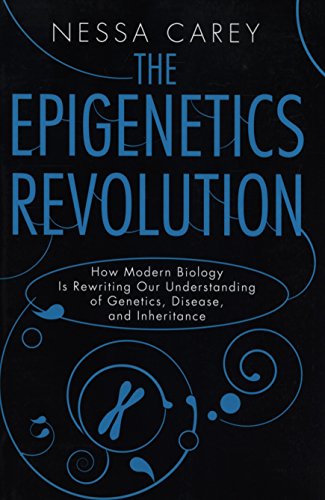 And, alas, much of dispute turns on the mechanics of cell biology: DNA’s structure, codons and anticodons, polymerases and transcriptases, the functions of ribosomes, chirality of alpha amino acids, microRNA, protein folding,  ORFans, developmental gene regulatory networks, Ediacaran and Cambrian paleontology (so much for 4004 BC), and similar technoglop, It isn’t rocket science, but it takes a bit of study to pick up. Most of us have other things to do.

The less one knows about cellular biology the easier it is to believe in spontaneous generation. Darwin knew nothing. Since then knowledge of biochemistry and molecular biology has grown phenomenally. Yet, despite a great deal of effort, the case for the accidental appearance of life has remained one of fervent insistence untainted by either evidence or theoretical plausibility.

What are some of the problems with official Darwinism? First, the spontaneous generation of life has not been replicated. (Granted, repeating a process thought to have taken billions of years might lack appeal as a doctoral project.) Nor has anyone assembled in the laboratory a chemical structure able to metabolize, reproduce, and thus to evolve. It has not been shown to be mathematically possible.

This is true despite endless theories about life arising in tidal pools, on moist clays, in geothermal vents, in shallows, in depths, or that life arrived on carbonaceous chondrites–i.e., meteors. It has even been suggested that life arrived from Mars, which is to say life came from a place where, as far as can be determined, there has never been any. Protracted desperation.

Sooner or later, a hypothesis must be either confirmed or abandoned. Which? When? Doesn’t science require evidence, reproducibility, demonstrated theoretical possibility? These do not exist. Does not the ferocious reaction to doubters of the official story suggest deep-seated doubt even among the believers?

Other serious problems with the official story: Missing intermediate fossils–”missing links”– stubbornly remain missing. “Punctuated equilibrium,” a theory of sudden rapid evolution invented to explain the lack of fossil evidence, seems unable to generate genetic information fast enough. Many proteins bear no resemblance to any others and therefore cannot have evolved from them. On and on.

Finally, the more complex an event, the less likely it is to  occur by chance. Over the years, cellular mechanisms have been found to be  ever more complex. Darwin thought that in a warm pond, bits of goo clumped together, a membrane formed, and life was off and running. Immediately after Watson and Crick in 1953, the chemical mechanics of cellular function still seemed comparatively simple, though nobody could say where the genetic information came from. Today thousands of proteins are known to take part in elaborate processes in which different parts of proteins are synthesized under control of different genes and then spliced and edited elaborately. Recently with the discovery of epigenetics, complexity has taken a great leap upward. (For anyone wanting to subject himself to such things, there is The Epigenetics Revolution. It is not light reading.)

Worth noting is that the mantra of evolutionists, that “in millions and millions and billions of years something must have evolved”–does not necessarily hold water. We have all heard of Sir James Jeans assertion that a monkey, typing randomly, would eventually produce all the books in the British Museum. (Actually he would not produce a single chapter in the accepted age of the universe, but never mind.) A strong case can be made that spontaneous generation is similarly of mathematically vanishing probability. If evolutionists could prove the contrary, they would immensely strengthen their case. They haven’t.

Improbabilities are multiplicative. The currents of exponentiation seem to be running ever more heavily against the monkey. If this is not true, evolutionists have not shown it not to be true.

Herewith a few recommendations for those who may be interested. Whatever one might conclude after reading the various authors on ID, you will quickly see that they are not “pseudoscientists,” not lightweights, and have serious technical credentials. They try to explain their subjects as they go along. Some succeed better than others.

The most accessible are Darwin’s Black Box, which I highly recommend, and The Edge of Evolution, both by Michael Behe, professor of biochemistry at Lehigh University. He puts the heavy-duty tech in the end notes. The intelligent reader will have no problem with these.

Also clearly written and carefully explained are Signature in the Cell (mentioned above) and Darwin’s Doubt, by Stephen Meyer (geophysicist, PhD in history and philosophy of science, Cambridge University.) The (again) intelligent reader will find these good but challenging. A third possibility is Undeniable, by Douglas Axe (Undergrad biochemistry, Berkeley, PhD. CalTech, chemical engineering). While very sharp, he uses analogy so much to keep things simple that the science can be lost. Ann Gauger,  Science and Human Origins, has a degree in biology from MIT, a PhD in developmental and molecular biology from the University of Washington, and has done postdoc work at Harvard (on the drosophila kinesin light chain, which I don’t know what is.)

Anyway,  Meyer takes the reader clearly and comprehensively through the question of the origin of life from, briefly, ancient times through the research of Watson and Crick and then into the depths of the cell in detail. Of particular interest is his discussion of the documented with references.

Should you order any of these books, ask Amazon to ship them in boxes labeled Kinky Sex Books or Applied Bestiality so nobody will know that you are reading ID. 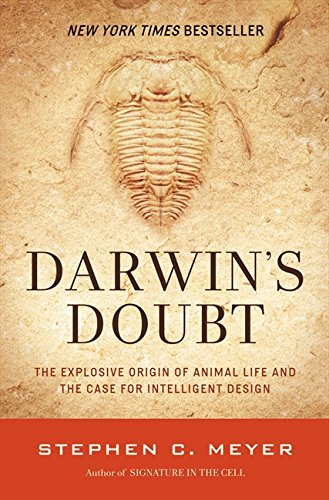 Here, allow me a thought that the writers above do not mention: Maybe nature is more mysterious than even the ID people think: The insane complexity of life might suggest a far deeper level of non-understanding than even the ID folk suspect.

Suppose that you saw an actual monkey pecking at a keyboard and, on examining his output, saw that he was typing, page after page, The Adventures of Tom Sawyer, with no errors.

You would suspect fraud, for instance that the typewriter was really a computer programmed with Tom. But no, on inspection you find that it is a genuine typewriter. Well then, you think, the monkey must be a robot, with Tom in RAM. But this too turns out to be wrong: The monkey in fact is one. After exhaustive examination, you are forced to conclude that Bonzo really is typing at random.

Yet he is producing Tom Sawyer. This being impossible, you would have to conclude that something was going on that you did not understand.

Much of biology is similar. For a zygote, barely visible, to turn into a baby is astronomically improbable, a suicidal assault on Murphy’s Law. Reading embryology makes this apparent. (Texts are prohibitively expensive, but Life Unfolding serves.) Yet every step in the process is in accord with chemical principles.

This doesn’t make sense. Not, anyway, unless one concludes that something deeper is going on that we do not understand. This brings to mind several adages that might serve to ameliorate our considerable arrogance. As Haldane said, “The world is not only queerer than we think, but queerer than we can think.” Or Fred’s Principle, “The smartest of a large number of hamsters is still a hamster.”

We may be too full of ourselves. 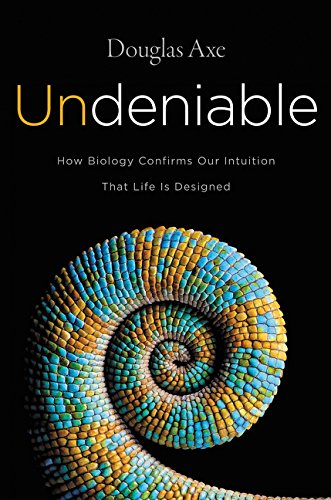 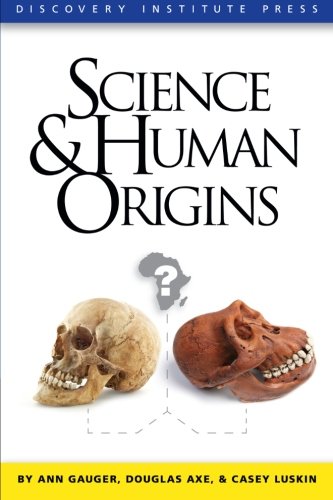 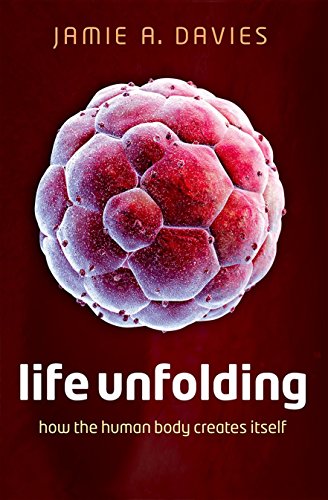 The Next Ice Age John Brennan, Melting Down and Covering Up