I know there are many articles on this website about sea level, none better than the recent one by David Middleton that speaks about “More nonsense about sea level rise.” I thought his article would make the continuance of this article unnecessary. It doesn’t because it is written for the WUWT readers. Unfortunately, too many of them like most of the public, scientists, and media don’t know what is involved in creating the net result that is sea level. I think because they don’t know, that it is time for something more basic as a citizen’s template for fighting city hall. Citizens of Honolulu are the most recent victims of this as the Mayor of Honolulu directs the City to prepare for a 3-foot sea level rise in some undetermined time period. It was reinforced during a recent radio interview when a caller asked about it because his city was planning to spend millions on structures to anticipate sea level rise. I provided a few facts about changes in sea level, scientifically called eustasy, and all the other mechanisms that could explain that change.

Let’s start with the automatic assumption by the public and the media that any major environmental issue, like global warming, glaciers melting, or sea level rising, is due to human activity. It reflects that bias, but also how little they know about all the natural causes of change. The simple assumption is that sea level rise is due to anthropogenic global warming (AGW) causing increased melting of glaciers adding more water to the oceans. In reality, just as with climate change, there is a multitude of causes, and few people know very little about any of them, and even those that do know have a quite limited understanding. As one group of scientists explained;

“a wide range of explanations for the current observed rise in sea level is possible.”

In 1997, before it sold out to sensationalism to survive as a science journal for the public, Scientific American, took a reasoned look at the issue. Figure 1 shows the cover story. 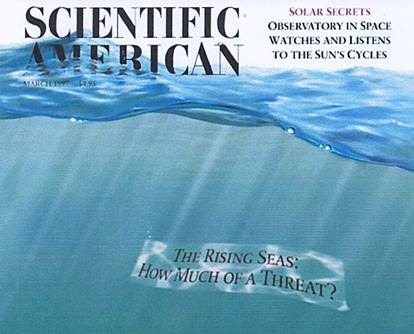 The conclusion they reached was illustrated in the story accompanying a picture of Holland because it was considered at greatest risk (Figure 2). Remember, this was before the UN exploited the South Pacific Islands by offering money in return for their collective votes in support of the Intergovernmental Panel on Climate Change agenda. 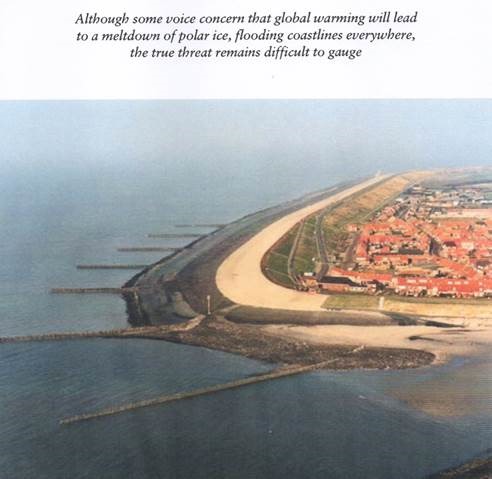 The caption is a good starting point toward understanding how this issue was distorted, misrepresented, and exploited. The extent to which this was an ideal vehicle for scaring the public about AGW is reflected in how it dominates Al Gore’s propaganda movie An Inconvenient Truth. A central, dramatic, feature included computer simulations of water inundating Florida and other areas.

Like everything related to the AGW deception the sea level issue began with a grossly simplistic position. It was based on the changes in sea level reconstructed since the zenith of the last glaciation that showed sea level rose approximately 120 meters with most of the increase occurring between 14,000 and 8000 years ago (Figure 3). 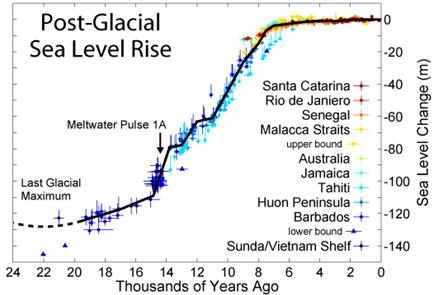 It is important to note that the last 8000 years covered most of the Holocene Optimum when temperatures were warmer than today for over 90% of the time. A recent study indicates temperatures as high as 6°C warmer than today 9000 years ago at Svalbard, Arctic North Atlantic. The question is why didn’t the rate of melt of the previous 6000 years continue? Regardless, early estimates of sea level rise and those made for future change, take the entire volume of ice, melt it down and add the volume of water to the existing sea level.

In the week before Gore received a Nobel Prize for his propaganda movie, a UK court ruled there were nine scientific errors some of which were created to enhance “the context of alarmism and exaggeration”. One of these was his claim of sea level rise of up to 20 feet “in the near future”. The Judge wrote, “This is distinctly alarmist and part of Mr. Gore’s “wake up call”. He noted that even if Greenland melted the water would be released, “but only after, and over millennia.” The judge also spoke to the claim of the threat to low-lying inhabited Pacific islands. Gore claimed they are, “being inundated because of anthropogenic global warming” and evacuations are occurring. The Court said there was no evidence of any evacuations. Gore exaggerates future levels well beyond his fellow Nobel Prize winners at the IPCC. Why haven’t they challenged his claims?

Unfortunately, few people know of the Court ruling, but even if they did, the debate is so ill-informed that sea level rise continues as a major concern? But what are the facts? What do we know? The facts, as usual, show what is happening is perfectly normal with no evidence of a human influence. Some of the following information is known to a few specialist scientists but the majority, like almost all the public, including most scientists, have little or no knowledge.

Sea level is not level. Most people can’t get their minds around this idea because water is frequently used as a measure of ‘level.’ Water on one side of the bowl will be at the same level as water on the other side. The belief is that if the water is all in one body, then it will be level in all areas. Confusingly, that is nowhere near the case with the Oceans. For example, sea level is different at each end of the Panama Canal, yet the Pacific and Atlantic Oceans are connected at both ends of the Americas. This is an important point because you might think the difference is due to the proximity of the land. It isn’t, as sea level varies considerably in the open ocean.

One cause is changes in atmospheric pressure. The weight of the atmosphere pressing down on the surface pushes the water down and causes it to flow out to other areas. Since air pressure varies considerably all the time, then the sea level varies accordingly. We see and can measure, this effect when the bulge caused in the region of very low pressure associated with hurricanes comes ashore and creates what is called a tidal surge. Sea level can rise several meters over very large areas under large low-pressure systems. As the system moves the sea level changes, and in low lying areas, causes flooding.

The water level will vary with wind speed. It is called a set-up and occurs measurably even in lakes. For example, lake levels in the south end of Lake Winnipeg (Figure 4) can be 2 meters higher in the south end with a steady northwest wind over a couple of days.

On the oceans, most people know waves and their size are a function of winds blowing over a stretch of water called a reach, but few think about the ‘piling up’ of water. Of course, if it increases the sea level in one area, it is decreasing the level in another. Some know the general pattern of surface winds also create surface ocean currents. Few know those currents, due to the frictional effect of the wind only extends down about 1000 meters, below that the circulation is very different, primarily being a function of cold water sinking at the Poles and rising at the Equator. 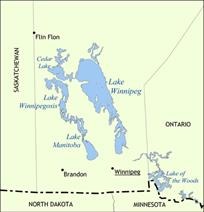 Some scientists show that gravity differences cause variations in sea level. Figure 5 shows an image produced from satellite data. As the author notes,

It is clear from this image, sea ‘level’ actually changes in height with spatial variations of 100m over the oceans. 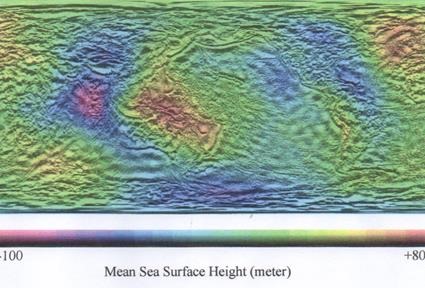 A discussion of the interaction between sea level and gravity are provided in a 2002 paper that notes,

Sea level rise is often accounted for by summarising mass budgets. In fact, however, the problem of sea level rise is complicated because a number of contributions interact with one another. For example, at the centre of concerns about sea level are the ice sheets. Changes in their mass not only effect (sic) eustatic sea level directly; they effect (sic) it too through viscous flows in the Earth’s mantle that change the shape and gravity field of the Earth, and they effect the ocean dynamical circulation because freshwater fluxes affect the buoyancy of the ocean water masses. Thus a comprehensive understanding of sea level needs not only to identify causes of sea level changes, but also ways in which they may interact.

There is another factor related to tidal conditions. Tides, which is the rise and fall of the oceans due to the gravitational attraction of the Sun and the Moon varies with the positions of the Sun and Moon relative to earth. However, those change over time. For example, we know from work on the Milankovitch Effect that the distances between the Sun and the earth change over relatively short time periods. The orbital change is given as 95,000 years, which seems too long to be of significance, but this is the complete cycle from extreme ellipse to almost circular (as it is now) and back. So, the actual change is one-half the time.

This idea of volume change as a function of temperature is even more problematic than the assumption that it is uniform in space and time. Two parts of my career taught me the error of that assumption. When I was involved in chasing Soviet submarines around the North Atlantic, we used instruments to detect the noises they make. Because of the way sound travels through water it required an accurate temperature profile of the water called a bathythermograph. We had instruments called Sonobuoys that could lower microphones or thermometers to preset depths to measure temperature as they descended. It was astonishing to see the temperature variance with depth that could occur. This means the volume of each layer varies thus affecting the net sea level value.

Similarly, we installed weather instruments every 200 ft on a 1000 ft radio tower outside of Winnipeg. Again, the variance in temperature with height at any given time was quite remarkable. We were especially surprised by the number of inversions that occurred. This is why the global temperature measured at weather stations located between 1 and 1.25 meters above the surface is that and only that. It is the temperature of the atmosphere between 1 and 1.25 meters.

The salt content of the oceans, known as salinity, varies considerably from region to region and that creates an imbalance. Different salinity creates different water density, and that can create different water levels and density currents. Perhaps one of the best known is between the Mediterranean and the Atlantic through the Straits of Gibraltar.

The #1 Survival Lesson You Can LearnTrump Stands His Ground