Statin Use and Amyotrophic Lateral Sclerosis—ALS

ALS ranks up there as one of the worst illnesses.  Also known as Lou Gehrig’s Disease, ALS is a rapidly progressing neurological disease where nerve cells in the muscles are attacked.  This leads to progressive weakness and disability.  Eventually, a patient with ALS will be unable to move his/her arms and legs and, in later stages, the breathing muscles are affected.   Death usually occurs from two to five years after the diagnosis.

As a physician, I hate seeing an ALS patient.  Seeing a patient with ALS makes me angry and upset.    There are no known effective treatments for this condition.  Over the last few decades, ALS is occurring more frequently and in younger patients.

A Canadian article about ALS states, “{Physicians are} uncovering surprising links between ALS and other diseases, like Alzheimer’s, Parkinson’s and frontotemporal dementia, which were once thought to be completely unrelated… (1)

What could be the link between the increasingly common diagnoses of ALS, Parkinson’s and Dementia? 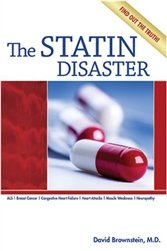 As I wrote in my book,  The Statin Disaster, statin use has been shown to be associated with an increased risk of being diagnosed with Alzheimer’s and dementia. I also wrote about the increased risk in ALS with statin use.