The Boston Globe’s Hit Piece on the Assassination of Senator Robert F. Kennedy

The counterattack on those, including Senator Robert Kennedy’s children, Robert F. Kennedy, Jr. and Kathleen Kennedy Townsend, claiming that Senator Robert F. Kennedy was assassinated as a result of a conspiracy involving at least a second gunman, has commenced.  The Boston Globe, the traditional hometown newspaper of the Kennedy family, published a clearly misleading piece on May 31, 2018 by Nik DeCosta-Klipa, with the curiously long and loaded title “Bobby Kennedy’s son thinks he was killed by a second shooter. Is there anything to it?  Or has RFK, Jr. “launched a whole new generation of conspiracy nuts 50 years later.”

Whether DeCosta-Klipa was acting on orders from above to produce such a specious piece or is ignorant of the fundamental research in a case that shouts out conspiracy is a question I cannot answer, although based on his go-to “expert” in his article – Daniel Moldea, whose contradictory disinformation on the case is well known to serious researchers – I would guess the former to be correct.

Let me begin with the title, which is marvelously propagandistic and sets the naïve reader’s mind on the intended trajectory.    RFK Jr.’s recent claim in The Washington Post of a second shooter and his call therefore for a re-investigation (a redundancy since no genuine official investigation was done; it was a cover-up from the start) is followed by a question: “Is there anything to it?  This is followed by a quote from Moldea, repeating the CIA created meme about conspiracy nuts: Or has RFK Jr “launched a whole new generation of conspiracy nuts 50 years later.”  Note how Moldea is allowed an assertion in the title that is not followed by a question mark.  Language is the key to effective propaganda, including punctuation.  It is a subtle art, at which our mainstream corporate media are adept.

DeCosta begins by asserting that “conspiracy theories concerning President John F. Kennedy’s death may be most widely circulated.”  Thus the reader is led into this article with the insinuation that of course Lee Harvey Oswald killed JFK and anyone who questions that is a conspiracy nut.  So what about RFK’s murder? 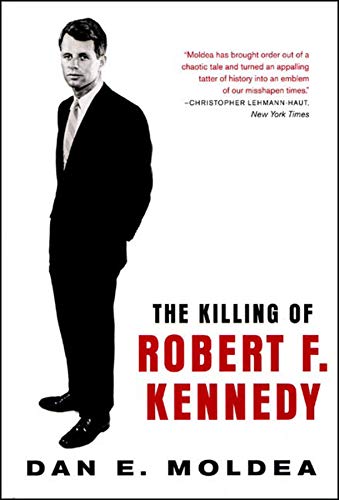 As the night follows day, we meet conspiracy nuts here too, courtesy of DeCosta-Klipa who allows Moldea a free hand to spout nonsense.  A person not familiar with the research done on this case by the great researcher Lisa Pease and others would assume that Moldea was the expert par excellence on RFK’s assassination, when nothing could be further from the truth.  James DiEugenio, Pease’s colleague and an equally brilliant researcher, has surgically dismembered Moldea’s work on the case.

So why has DeCosta-Klipa shined the spotlight on Moldea and given him so much space?

It is unlikely that he has read Moldea’s 1995 book, The Killing of Robert F. Kennedy, a book about which DiEugenio rightly says: its “every major tenet is highly suspect, whose sourcing is not explicit, whose fairness is, to say the least, one-sided, whose completeness is just not there, whose use of witnesses-like Kaiser and McCowan-is rather lenient….it is a ‘bookshelf’ book that has no intellectual content or substance.”  He suggests it was commissioned by the government forces responsible for RFK’s death and the ongoing cover-up.

To claim absurdly that the LAPD messed up and was not involved in the sinister plot and cover-up.

To rip Robert Kennedy Jr. with the words “What Bobby Kennedy Jr. has done, he’s launched a whole new generation of conspiracy nuts who are going to believe that Sirhan didn’t do it and somebody else did.”

(The conspiracy label was created by the CIA in 1967 to besmirch the name and reputation of anyone questioning the assassination of President Kennedy.  CIA agents and assets throughout the mass media were encouraged to use it constantly.  Of course they have.)

To preposterously claim that all the eyewitnesses were wrong and that since the autopsy definitively showed Kennedy was shot from the rear at point blank range that he must have turned around so Sirhan, who was standing feet away to the front could shoot him in his back and head.  To which, of course, DeCosta-Klipa has no reply, as if it weren’t ridiculous.

To falsely claim – lie – that Paul Schrade, an aide to the senator, who was walking behind him and was the first person shot, fell into RFK, pushing him toward Sirhan, when in fact Schrade fell backwards feet behind RFK.

To absurdly claim that the many bullet holes found in the door frames and wall weren’t bullet holes at all, but in DeCosta-Kipa’s words, paraphrasing Moldea, “were most likely the result of any number of kitchen carts banging into the wall.”

To claim that the man highly suspected of having shot Kennedy from the rear, the security guard Thane Eugene Cesar, is innocent since he told him so.  But he doesn’t say that Cesar fled the country and is living somewhere in Asia under Moldea’s protection.

To claim the highly suspect police investigator of the shooting, DeWayne Wolfer, who also falsely asserts that no extra bullets were ever found, is a reliable source, despite extensive evidence to the contrary.

And to top it off, DeCosta-Klipa grants Moldea the final words:  “I think [RFK Jr.] has been misled, conned, and corrupted by the conspiracy crowd to believe this garbage that the man that murdered his father is innocent.”

The truth is the readers of The Boston Globe have been misled, conned, and corrupted by a classic piece of propaganda.

It is a disgrace.