The Germanization of Early Medieval Christianity: A Sociohistorical Approach to Religious Transformation, by James C. Russell

Russell begins his specific examination of the acceptance of Christianity by the Germanic people, the first covering the period 376 – 678.  This covers the period from the Germanic entrance into the Roman Empire until the Anglo-Saxon mission by Bishop Wilfrid of York to Frisia.

When speaking of Christianity in this context, there are two prominent theologies: Germanic Arianism and Frankish Catholicism.  Seeking refuge from the Huns, the Visigoths negotiated with Valens, the Arian Christian emperor of the Eastern Empire: Arianism was adopted in exchange for asylum.

Several characteristics can be noted from this first encounter, characteristics that would repeat for even centuries into the future: political leaders vouched for their subjects regarding Christianization; Christianity was associated with Roman culture and the Roman polity; there was little or no religious instruction prior to baptism. 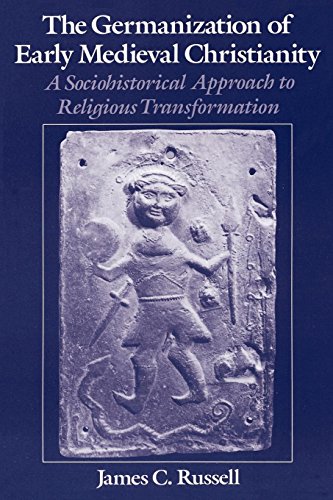 By the middle of the sixth century, several tribes – to include the Bavarians, Thuringians and Lombards – accepted the Arian form of Christianity; others – including the Franks, Alamanni and Saxons – remained unaffected.

Yet Valens suffered defeat and death in the battle of Adrianople; with him, Arianism was on the wane in the empire.  The Arian heresy suffered condemnation in the Council of Constantinople in 381.

Why did the leaders of most of the Germanic peoples accept the Arian form of Christianity, just as this heresy was in the process of being extirpated throughout the Roman Empire?

Some believe it is due to the Arian belief that the Son is subordinate to the Father – a characteristic easily understood and accepted by a hierarchical culture.  Others believe that Arianism spread because it wasn’t Roman – in this manner, less of a possibility that the Germanic tribes would be absorbed into the Universal Church – and therefore into the empire.

It was Clovis, ascending to the throne in 481 as the king of the Franks, who was recruited by the Roman Catholic Church to be their champion; Clovis saw that through the Roman Church he could find a means to consolidate an empire.  The Franks were, perhaps, more predisposed to become affiliated with Roman Christianity as their relationship with the Roman Empire was more gradual and less antagonistic than it was for the Visigoths.

…the overall relationship between the Franks and the Romans in the century preceding the baptism of Clovis in 496 was one of relative harmony. …it may be argued that the Franks perceived their greatest potential military threat as coming from the neighboring Germanic peoples rather than from the Romans.

Aside from baptism, Clovis was almost certainly not a Christian in any meaningful sense; yet his baptism committed the Merovingians to the Church.  Paganism was tolerated throughout.  After Clovis died, the process of Christianization stalled for almost 80 years, until the arrival in Gaul of the Irish monk Columbanus, in about 590.

During this period, little more was enforced beyond the sanctification of Sundays and holy days.  However, two important developments did occur:

Privately developed and maintained churches and monasteries.  In such a system, the feudal lord held proprietary rights, most importantly the right to nominate the ecclesiastic personnel.  Through this, Columbanus succeeded in establishing a series of monasteries on the property of northern Frankish aristocrats – all the leading families had one or more of their members attracted to this new monasticism.

Still, this does not imply nor suggest that something approaching Christianity as it was understood in Rome was taking form.  The Merovingian kings did little to impose doctrinal orthodoxy; instead they were more concerned with “orthopraxy,” adhering to the cultic and ritual observances of Christianity.

It will be recalled that the earliest missionaries presented a message deemed least offensive to Germanic traditions and beliefs.  All errors could not be eradicated at once; accommodation was acceptable when necessary in order to get one’s foot in the door.

For example, the doctrinal concepts of sin, salvation and humility would seem remote to all Germanic classes – even reprehensible to the warrior class and their understanding of honor; therefore these were not stressed.  Protection against evil magic, prayers for victory or a blissful death; these were sufficient.

Christianity brought other new concepts into Europe: the origin of time in Creation, the end of time on the Day of Judgment; ethical conformity and doctrinal belief.  These were not present in the folk-religion of the Germanic people.

What might be described as the introductory period of accommodation was to evolve into a second phase, beginning in 678 with St. Wilfrid’s visit to Frisia and ending with the martyrdom of St. Boniface in 754.  It is during this period that it is generally considered that the conversion to Christianity is completed, albeit in a Germanic form: sermons still emphasized victory in battle on earth and made secondary the promise of eternal live.

During and after this time, efforts were made to deal with the shortcomings that were a result of the accommodations.  At times, these efforts were rather blunt, for example:

…following Charlemagne’s victory over the Saxons at Verden in 782 and his massacre of 4500 pagan Saxon prisoners, he received a letter from Pope Hadrian I announcing “three days of thanksgiving for this great Christian victory.”

But the question remains for me: what was unique about the combination of these tribes and this religion that brought forward a society and law that one can view as reasonably approaching libertarian?

It seems to me to be the key point of connection, the convergence of a Christian and a Germanic characteristic that reinforced and magnified the other, is that of Christian ethics on the one hand and the Germanic concept of honor on the other.  From the sermon of the Benedictine abbot and bishop Pirmin:

A Christian who has the name but does not do the deeds will not be glorified by Christ.

Doing the deeds plays on the idea of honor; it was a question of modifying the desired “deeds.” This was often done subtlety – among other ways, in a manner we would understand well today: the gradual modification of language and definitions.  It was also done bluntly, via force, conquest, and submission – at least during the era of Charlemagne.

Pirmin identified several general and abstract sins; he placed special emphasis on the sinfulness of engaging in pagan practices: worship of or at sacred springs, stones or trees; acts of pagan magicians and magical practices.

It is the teaching of this Christian way of life that marks this second stage in the process of conversion, the first stage being the introduction and accommodation.  There was a whole new code of moral values, grafted onto the customs and traditions of the Germanic tribes – ethical modification.

And it is in this intersection, perhaps, that the characteristics behind the decentralized, relatively libertarian society and law of the Middle Ages gained its strength.

…there was a price to be paid for the Frankish experiment in creating a Christian social structure and culture.  It gave to the western Church a wonderful sense of unity and coherence; it gave to western society great dynamism, which lies at the source of the European impact on the world.  But it involved a degree of doctrinal, liturgical, and at bottom, cultural and racial intolerance, which made an ecumenical Church impossible.  Unity in depth was brought at the expense of unity in breadth.

And in this paragraph one can find the entirety of my struggle with liberalism.  There is a price to be paid if one wants to achieve something approaching a libertarian, decentralized society; the price is explained.  History has demonstrated that unity in depth is longer lasting and more stable (and more libertarian) than unity in breadth.  Get enough breadth and there is no chance of unity, as we see even today.

By 800, the capital of western Christianity shifted from Rome and the Mediterranean to the north in Aachen.  Its spiritual centers were to be found in England, Gaul (northern France), and Germany.  This was accompanied by a cultural – though not yet formally ecclesiastical – break with the Byzantine East.

It was not until the tenth century that the new religion truly began to modify men’s thinking, when church towers rose above the cultivated fields.  And it was with the rise of the Ottonian emperors of the tenth and eleventh centuries that Germanic Christianity made its way south and over the Alps, even to Rome.

Why Do They Tell Us Transparent Lies?Dancing With a Witch