I recently heard a young black male student give thanks to the fact that at my school, Loyola University New Orleans, for the first time in his academic career, he has had teachers who “look like him.” He meant that at our university, finally, there are African American professors. He was very grateful for that fact.

This young man is in grave error, and the present essay is an attempt to correct him.

I have a brown belt in Shoto-Kan Karate. Virtually none of my senseis (teachers) look like me. Well, yes, they all had heads, feet, arms, heads, and, I presume, the usual complements of kishkes (inner body parts), but that is where it ended. Many of them were Oriental (I know, I know, you’re not supposed to say this anymore, but I think political correctness is an evil that should be opposed whenever possible). Some of my karate teachers were female. Did I suffer from this? Would I have been better off if my Karatekas were old, white, fat, bearded Jews like me? Hardly. The criterion I sensibly employed in my selection was not “lookism” but rather ability to teach this discipline.

Do I look more like this grateful student than a black female professor? It is difficult to tell. On the one hand, he and I share the same indoor plumbing. On the other hand, he and she have different pigments in their skin than I.

I identify with the New Orleans Pelicans. Yet, apart from maleness (and age and athletic ability too!), virtually none of them “look like me.” Should I be perturbed at that fact? Should I petition management to fire a few of the present black team members and hire some Caucasian basketball players? Not if I want them to win, which I certainly do. Do we really want a National Basketball Association that looks like America? Blacks comprise about 13% of the U.S. population, but account for some 85% of professional basketball membership. Should we seek more “diversity” in this regard? Maybe we should fire some of the best athletes on the planet, and substitute for them those who better represent our average pigmentation? That would be the logical implication of those who, seemingly, have taught this young Loyola student. 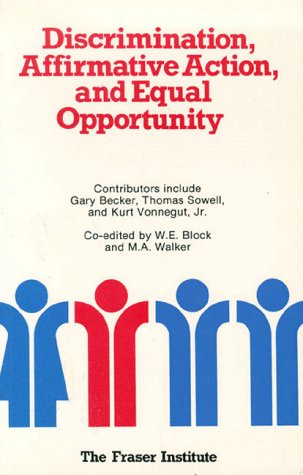 I have learned more economics from Thomas Sowell and Walter Williams in the fields of racial and sexual discrimination than I have from any other two scholars (I am honored to a co author of the latter, and the editor of a book, Discrimination, Affirmative Action and Equal Opportunity, that includes contributions from both of them.) Yet, horrors, these two African Americans have a much darker skin color than me. Should I have renounced their teachings, seeking those of whites, instead? If I did, I would have cheated myself out of very valuable insights.

To return to that young black male student who gave thanks to the fact that at Loyola, for the first time in his academic career, he has teachers who “look like him.” Here is some free advice for him: No, no, no, skin color is entirely irrelevant. If you want a university experience that will inspire you, educate you, help you get a better job, hopefully aid you to become wealthier and happier than would otherwise be the case, look not at the skin color of your faculty. Rather, select those best able to help you attain these sorts of goals.

Yes, we do indeed need more diversity at Loyola but not along the usual racial, sexual, ethnic lines. Rather, there is a great need for this in terms of ideology. There are far too many social justice warriors, socialists, progressives, intersectionalists, liberation theologians, communists, lefties, cultural and economic Marxists and their ilk on the faculty, and far too few libertarians and conservatives. We need more balance, ideologically, so that our students may better become aware of all shades of intellectual opinion than at present.