Henry U.S. Survival Pack with AR-7 Takedown Rifle – Why You Need One

Wisconsin – 29 December 2018 was the 44th anniversary of the first showing of Stanley Kubrick’s nuclear war satire “Dr. Strangelove Or: How I Learned to Stop Worrying and Love the Bomb.”

It premiered that day in New York, Toronto and London. In one of the classic scenes Major T.J. “King” Kong is going through his emergency survival kit that the Air Force has provided him on his B-52 nuclear bomber aircraft.

You will remember Major Kong (played by actor Slim Pickens) as he rides the nuclear bomb down to the target all the time waving his cowboy hat.

A few days ago I was walking into the Shooters Sports Center in Racine, Wisconsin and spotted Mike Art, the manager as I entered. I was there to pick up a Henry U.S. Survival Pack that includes an AR-7 rifle to place in the pack .

Mike in his younger days was a Navy Chief Petty Officer and nuke sub driver. I am an old US Air Force, Strategic Air Command (read B-52 nuke bombers) cop. So, Mike and I have been up close and in personal contact with nuclear weapons. Professionally, we both understand what nukes can and cannot do. When Mike spots me, he starts repeating Slim Pickens / Major Kong’s lines in reference to the B-52 survival kit. At first I do not understand what he is talking about.

What Mike was doing was making a humorous comparison between the B-52 survival kit and the Henry U.S Survival Pack that has arrived at his gun shop.

Mike and I both know that an individual needs a survival kit. You have the right to survive but you also have the obligation to survive, others may depend on you. Hollywood sadly gives you the mistaken impression that one nuke will strike your country and everyone will be vaporized, so of course no one will survive. If that is the case then why practice the Boy Scout motto to “Be Prepared”? 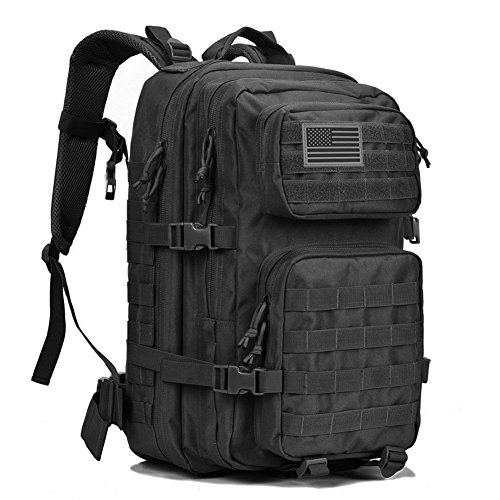 The US can absorb massive amounts of earthquakes, volcano eruptions, nuclear weapons detonations, even the Caldera in Yellowstone erupting and there will be survivors. In order to continue to function and stay alive you have to have some basic tools and some basic skills.

A bug-out-bag or a bug-home-bag should be the lowest common denominator you start with. The Henry U.S. Survival Pack is an excellent beginning point. You have the foundation to build your bug-out-bag, with an AR-7, 22LR semi-auto light weight survival rifle, a well made sturdy case to store and transport the rifle and the additional survival/field-craft items that come with the “Pack“.

In the custom, Allen-made gear bag there is 100 feet of para-cord, a tourniquet, a space blanket, a fire steel for starting fires, a water purification straw, datrex food bars and a Buck folding knife. After positioning all the above gear and the Henry AR-7 survival rifle in the gear bag, you still have plenty of room to add other tools you might need in the field.

The author, James Wesley Rawles has a series of books that deal with the economic breakdown of the US and those who try to survive the aftermath. One of his characters is a military veteran, single mother who lives in West Virginia and commutes everyday by van-pool in to the D.C. area to work at her US Government job. She needs the job but must live so far away from D.C. because she cannot afford to work and live in that town. She sees serious problems coming and hides an AR-7 survival rifle inside the van, hoping to not get caught by some security person at the gate of her employment location.

Eventually the crisis hits and the veteran/single mother uses her stashed away AR-7 rifle to aid in her bugging out of DC and returning safely to her children. Fiction of course, but a very real-world scenario devised by Mr. Rawles in his book.

The Henry U.S. Survival Rifle/AR-7 is “the” survival rifle, that one tool everyone must have in their bug-out bag. The AR-7 rifle is a tried and true firearm that has rendered help to many a desperate person in a crisis situation. Henry’s greatly improved version of the AR-7 has most effectively enhanced the quality of the rifle and its performance on the range or in the struggle to prevail in the field.

I am well aware that folks reading this article most likely have a working knowledge of how to prepare, but what about your extended family or more importantly your adult children striking out own their own? Are they ready or could they use some help in what to acquire for a basic survival firearm and getting started on building a bug-out kit?

Henry has an expertly designed small package titled the Henry Repeating Survival Kit which they sell separately that will greatly complement the Henry U.S. Survival Pack. There is even a exterior pouch on the Survival Pack gear bag that will conveniently permit the storage of the metal container securely holding the items of the Henry Repeating Survival Kit. Add an assortment of 22LR ammo to the mix and you have the basic contents of a life saving kit you can provide to a less prepared family member.

This is a foundation to build on for those getting started with survival preparation. Of course you can add any and all other items you feel you might need. Just remember you may have to carry everything, as you bug out to safety on foot–choose wisely what you add to your kit. By combining the Henry U.S. Survival Pack, the Henry Repeating Survival Kit and some 22LR ammo all in one small, easy to handle and store case, you will go a long way in helping your skeptical friend or relative that you gave this life saving gift to. Hopefully, they will take it with them on their life’s journey and just “Be Prepared”. If they never need it great and if they do you will be remembered as the one who cared enough to actually spend your time and money assisting them to project readiness.

Some people always survive a major crisis. In many cases that is the easy part. It is the long term ability to survive and get on with some semblance of normal that really counts. You have to start somewhere to get ready and the folks at Henry Rifles have actuated that process for you. Now you need to take their beginning help and build a life sustaining plan.

The AR-7 rifle has been in the evil-delaying business for a long time and the folks at Henry have profoundly improved that process.
It is about survival–your survival–or maybe your children.

Major Van E. Harl USAF Ret., a career Police Officer in the U.S. Air Force was born in Burlington, Iowa, USA, in 1955. He was the Deputy Chief of police at two Air Force Bases and the Commander of Law Enforcement Operations at another. He is a graduate of the U.S. Army Infantry School. A retired Colorado Ranger and currently is an Auxiliary Police Officer with the Cudahy PD in Milwaukee County, WI. His efforts now are directed at church campus safely and security training. He believes “evil hates organization.” [email protected]

A Stalinist Purge in America? Guns Are Less Available Than Ever