The Influenza Pandemic of 1918

The influenza pandemic of 1918-1919 killed more people than the Great War, known today as World War I (WWI), at somewhere between 20 and 40 million people. It has been cited as the most devastating epidemic in recorded world history. More people died of influenza in a single year than in four-years of the Black Death Bubonic Plague from 1347 to 1351. Known as “Spanish Flu” or “La Grippe” the influenza of 1918-1919 was a global disaster. 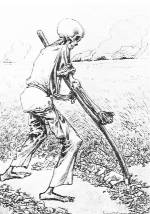 The Grim Reaper by Louis Raemaekers

In the fall of 1918 the Great War in Europe was winding down and peace was on the horizon. The Americans had joined in the fight, bringing the Allies closer to victory against the Germans. Deep within the trenches these men lived through some of the most brutal conditions of life, which it seemed could not be any worse. Then, in pockets across the globe, something erupted that seemed as benign as the common cold. The influenza of that season, however, was far more than a cold. In the two years that this scourge ravaged the earth, a fifth of the world’s population was infected. The flu was most deadly for people ages 20 to 40. This pattern of morbidity was unusual for influenza which is usually a killer of the elderly and young children. It infected 28% of all Americans (Tice). An estimated 675,000 Americans died of influenza during the pandemic, ten times as many as in the world war. Of the U.S. soldiers who died in Europe, half of them fell to the influenza virus and not to the enemy (Deseret News). An estimated 43,000 servicemen mobilized for WWI died of influenza (Crosby). 1918 would go down as unforgettable year of suffering and death and yet of peace. As noted in the Journal of the American Medical Association final edition of 1918:

“The 1918 has gone: a year momentous as the termination of the most cruel war in the annals of the human race; a year which marked, the end at least for a time, of man’s destruction of man; unfortunately a year in which developed a most fatal infectious disease causing the death of hundreds of thousands of human beings. Medical science for four and one-half years devoted itself to putting men on the firing line and keeping them there. Now it must turn with its whole might to combating the greatest enemy of all–infectious disease,” (12/28/1918). 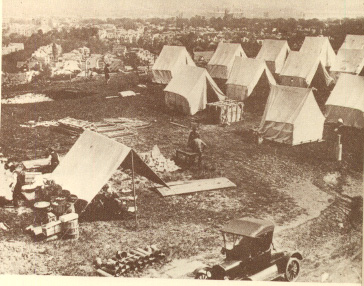 An Emergency Hospital for Influenza Patients

The effect of the influenza epidemic was so severe that the average life span in the US was depressed by 10 years. The influenza virus had a profound virulence, with a mortality rate at 2.5% compared to the previous influenza epidemics, which were less than 0.1%. The death rate for 15 to 34-year-olds of influenza and pneumonia were 20 times higher in 1918 than in previous years (Taubenberger). People were struck with illness on the street and died rapid deaths. One anectode shared of 1918 was of four women playing bridge together late into the night. Overnight, three of the women died from influenza (Hoagg). Others told stories of people on their way to work suddenly developing the flu and dying within hours (Henig). One physician writes that patients with seemingly ordinary influenza would rapidly “develop the most viscous type of pneumonia that has ever been seen” and later when cyanosis appeared in the patients, “it is simply a struggle for air until they suffocate,” (Grist, 1979). Another physician recalls that the influenza patients “died struggling to clear their airways of a blood-tinged froth that sometimes gushed from their nose and mouth,” (Starr, 1976). The physicians of the time were helpless against this powerful agent of influenza. In 1918 children would skip rope to the rhyme (Crawford):

I had a little bird,
Its name was Enza.
I opened the window,
And in-flu-enza.

The influenza pandemic circled the globe. Most of humanity felt the effects of this strain of the influenza virus. It spread following the path of its human carriers, along trade routes and shipping lines. Outbreaks swept through North America, Europe, Asia, Africa, Brazil and the South Pacific (Taubenberger). In India the mortality rate was extremely high at around 50 deaths from influenza per 1,000 people (Brown). The Great War, with its mass movements of men in armies and aboard ships, probably aided in its rapid diffusion and attack. The origins of the deadly flu disease were unknown but widely speculated upon. Some of the allies thought of the epidemic as a biological warfare tool of the Germans. Many thought it was a result of the trench warfare, the use of mustard gases and the generated “smoke and fumes” of the war. A national campaign began using the ready rhetoric of war to fight the new enemy of microscopic proportions. A study attempted to reason why the disease had been so devastating in certain localized regions, looking at the climate, the weather and the racial composition of cities. They found humidity to be linked with more severe epidemics as it “fosters the dissemination of the bacteria,” (Committee on Atmosphere and Man, 1923). Meanwhile the new sciences of the infectious agents and immunology were racing to come up with a vaccine or therapy to stop the epidemics.

The experiences of people in military camps encountering the influenza pandemic:An excerpt for the memoirs of a survivor at Camp Funston of the pandemic Survivor

The origins of this influenza variant is not precisely known. It is thought to have originated in China in a rare genetic shift of the influenza virus. The recombination of its surface proteins created a virus novel to almost everyone and a loss of herd immunity. Recently the virus has been reconstructed from the tissue of a dead soldier and is now being genetically characterized. The name of Spanish Flu came from the early affliction and large mortalities in Spain (BMJ,10/19/1918) where it allegedly killed 8 million in May (BMJ, 7/13/1918). However, a first wave of influenza appeared early in the spring of 1918 in Kansas and in military camps throughout the US. Few noticed the epidemic in the midst of the war. Wilson had just given his 14 point address. There was virtually no response or acknowledgment to the epidemics in March and April in the military camps. It was unfortunate that no steps were taken to prepare for the usual recrudescence of the virulent influenza strain in the winter. The lack of action was later criticized when the epidemic could not be ignored in the winter of 1918 (BMJ, 1918). These first epidemics at training camps were a sign of what was coming in greater magnitude in the fall and winter of 1918 to the entire world.

The war brought the virus back into the US for the second wave of the epidemic. It first arrived in Boston in September of 1918 through the port busy with war shipments of machinery and supplies. The war also enabled the virus to spread and diffuse. Men across the nation were mobilizing to join the military and the cause. As they came together, they brought the virus with them and to those they contacted. The virus killed almost 200,00 in October of 1918 alone. In November 11 of 1918 the end of the war enabled a resurgence. As people celebrated Armistice Day with parades and large partiess, a complete disaster from the public health standpoint, a rebirth of the epidemic occurred in some cities. The flu that winter was beyond imagination as millions were infected and thousands died. Just as the war had effected the course of influenza, influenza affected the war. Entire fleets were ill with the disease and men on the front were too sick to fight. The flu was devastating to both sides, killing more men than their own weapons could.

With the military patients coming home from the war with battle wounds and mustard gas burns, hospital facilities and staff were taxed to the limit. This created a shortage of physicians, especially in the civilian sector as many had been lost for service with the military. Since the medical practitioners were away with the troops, only the medical students were left to care for the sick. Third and forth year classes were closed and the students assigned jobs as interns or nurses (Starr,1976). One article noted that “depletion has been carried to such an extent that the practitioners are brought very near the breaking point,” (BMJ, 11/2/1918). The shortage was further confounded by the added loss of physicians to the epidemic. In the U.S., the Red Cross had to recruit more volunteers to contribute to the new cause at home of fighting the influenza epidemic. To respond with the fullest utilization of nurses, volunteers and medical supplies, the Red Cross created a National Committee on Influenza. It was involved in both military and civilian sectors to mobilize all forces to fight Spanish influenza (Crosby, 1989). In some areas of the US, the nursing shortage was so acute that the Red Cross had to ask local businesses to allow workers to have the day off if they volunteer in the hospitals at night (Deseret News).

Emergency hospitals were created to take in the patients from the US and those arriving sick from overseas.

The pandemic affected everyone. With one-quarter of the US and one-fifth of the world infected with the influenza, it was impossible to escape from the illness. Even President Woodrow Wilson suffered from the flu in early 1919 while negotiating the crucial treaty of Versailles to end the World War (Tice). Those who were lucky enough to avoid infection had to deal with the public health ordinances to restrain the spread of the disease. The public health departments distributed gauze masks to be worn in public. Stores could not hold sales, funerals were limited to 15 minutes. Some towns required a signed certificate to enter and railroads would not accept passengers without them. Those who ignored the flu ordinances had to pay steep fines enforced by extra officers (Deseret News). Bodies pilled up as the massive deaths of the epidemic ensued. Besides the lack of health care workers and medical supplies, there was a shortage of coffins, morticians and gravediggers (Knox). The conditions in 1918 were not so far removed from the Black Death in the era of the bubonic plague of the Middle Ages.

In 1918-19 this deadly influenza pandemic erupted during the final stages of World War I. Nations were already attempting to deal with the effects and costs of the war. Propaganda campaigns and war restrictions and rations had been implemented by governments. Nationalism pervaded as people accepted government authority. This allowed the public health departments to easily step in and implement their restrictive measures. The war also gave science greater importance as governments relied on scientists, now armed with the new germ theory and the development of antiseptic surgery, to design vaccines and reduce mortalities of disease and battle wounds. Their new technologies could preserve the men on the front and ultimately save the world. These conditions created by World War I, together with the current social attitudes and ideas, led to the relatively calm response of the public and application of scientific ideas. People allowed for strict measures and loss of freedom during the war as they submitted to the needs of the nation ahead of their personal needs. They had accepted the limitations placed with rationing and drafting. The responses of the public health officials reflected the new allegiance to science and the wartime society. The medical and scientific communities had developed new theories and applied them to prevention, diagnostics and treatment of the influenza patients.

Atlantis Found?Too Many Wars. Too Many Enemies