Shortly after Murray Rothbard’s lamented death in January, 1995, Lew  Rockwell telephoned me. He asked me to write a book review journal for the Mises Institute, covering new books in philosophy, history, politics, and economics. Moreover, he wanted the first issue in one month. I managed to meet the deadline and continued to write the journal for a number of years. Articles from The Mises Review form the bulk of the material included in these volumes; but a few reviews from other sources are here as well. Ever since I first read Man, Economy, and State in 1962, I have been a convinced Rothbardian, and it from this standpoint that I have written my articles. David Gordon, from the Foreword.

David Gordon is a philosopher an intellectual historian who studied under such luminaries as Friedrich Hayek and Robert Nozick. His greatest influence is his mentor Murray Rothbard. For over twenty years, David has been writing book reviews for the Mises’ Institute’s journal, The Mises Review. Fortunately the Mises Institute has now published three substantial volumes of Dr. Gordon’s reviews (some of which appeared in other places). The series is appropriately titled “An Austro-Libertarian View.” 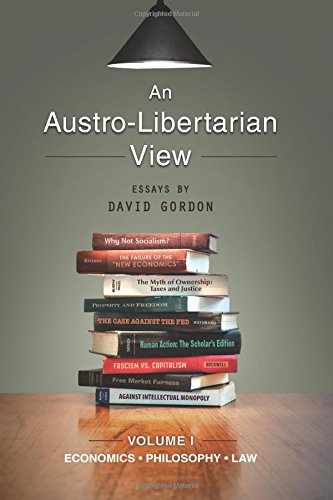 Volume one covers Gordon’s reviews of books on economics, philosophy and law. Even thought I’ve read only a smattering of the books, David’s reviews always informative. It’s hard to know where to start . One of my favorite reviews is that of Judge Richard Posner’s “Law, Pragmatism, and Democracy.” He skewers Posner for his superficial understanding of philosophers such as Quine, Goodman and Popper. Stephen Hicks’s “Explaining Postmodernism” comes in for a more sympathetic reading. Hicks is an Objectivist philosopher, although not associated with the Leonard Peikoff’s Ayn Rand Institute. Hicks’s book is, as Gordon notes, a much better informed reading of the contemporary philosophical scene than, say, typical Objectivist screeds such a Peikoff’s The Ominous Parallels.

Although many of the books reviewed may be forgotten soon, these reviews provide insight into the Austro-Libertarian view of the world.