Rise of the Phoenix

The Great Heresies, by Hilaire Belloc

It has always seemed to me possible, and even probable, that there would be a resurrection of Islam and that our sons or our grandsons would see the renewal of that tremendous struggle between the Christian culture and what has been for more than a thousand years its greatest opponent.

So writes Belloc, as published in 1938.  Before considering the heresy and the history both before and since he wrote these words, perhaps it is worth considering the situation in Muslim lands at the time he was writing.

After the Great War, what was left of Mohammedan power even in hither Asia, let alone Constantinople, was only saved by the violent quarrels between the Allies.

In 1938, almost all Muslims lived in lands controlled and occupied by a European power: virtually all of North Africa; all of the Middle East except Turkey (you might also except Saudi Arabia, but must recognize the British position in their oil); much of Central Asia; finally, the Asian sub-continent.

It was in this environment of the Muslim’s weakest point since its founding that Belloc foresaw the rise once again of a Muslim threat to Europe.

Belloc offers a brief history of the rise and fall of Islam as a political power and empire:

They quickly overran Egypt and Northern Africa, Asia Minor, finally crossing the Straits of Gibraltar into Spain.  By 732 – less than 100 years after their first victories – Muslim armies reached as far as Northern France.  They were thrown back to the Pyrenees, but continued to hold most of Spain. 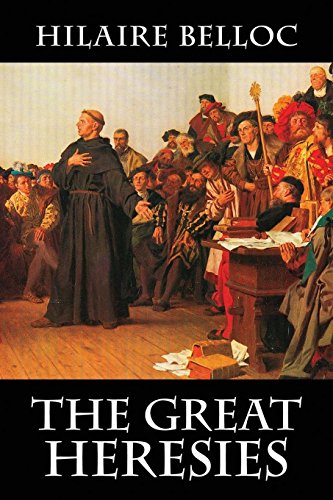 We know of the Crusades called by the Pope.  These were not called in a vacuum; they were called in reaction to the violent conquest of Christian lands in the Middle East.  Brief successes followed by ultimate failure.

If the first Crusaders had had enough men to take Damascus their effort would have been permanently successful.

But they had only enough men to hold the seacoast of Palestine (I expand on this history here and here, also thanks to Belloc).  Perhaps a similar reason as to why Syria is so important today.

Europe finally beat back Muslim advances into Europe on September 11, 1683:

The battle was fought by the Habsburg Monarchy, the Polish–Lithuanian Commonwealth and the Holy Roman Empire, under the command of King John III Sobieski against the Ottomans and their vassal and tributary states. The battle marked the first time the Commonwealth and the Holy Roman Empire had cooperated militarily against the Ottomans, and it is often seen as a turning point in history, after which “the Ottoman Turks ceased to be a menace to the Christian world”.

The exclamation point was placed on September 11, 1697:

The Battle of Zenta…on the east side of the Tisa river, was a major engagement in the Great Turkish War (1683–1699) and one of the most decisive defeats in Ottoman history.

This battle ended Ottoman control over large parts of Central Europe.  And from this point, we come to 1938 and the aforementioned European control over the vast majority of lands populated by Muslims, as Muslims gradually lost the race to Europeans in the material things necessary to wage war.

Interesting how September 11 keeps coming up in this relationship.

Belloc offers that Islam is a heresy and not a wholly new religion:

It was not a pagan contrast with the Church; it was not an alien enemy.  It was a perversion of Christian doctrine.

If anyone sets down those points that orthodox Catholicism has in common with Mohammedism, and those points only, one might imagine if one went no further that there should have been no cause of quarrel.

But the central point where this new heresy struck home with a mortal blow against the Catholic tradition was a full denial of the Incarnation.

Jesus was a prophet – the greatest of all prophets – but he was only a man, not God and not the Son of God.  About the most important point, I would say.

The Future (as Belloc saw it)

Belloc saw no reason that would prevent Islam from rising again as a power – a power that would threaten, once again, the Christian west.  He offered: talk to any Egyptian or Syrian student, and you will find him the equal of any European student on the subjects of his study.

Belloc offers the weakness of Europe: Europe replaced Christendom as its binding force:

In the place of the old Christian enthusiasm of Europe there came, for a time, the enthusiasm for nationality, the religion of patriotism.  But self-worship is not enough, and the forces which are making for the destruction of our culture, notably the Jewish Communist propaganda from Moscow, have a likelier future before them than our old-fashioned patriotism.

The Muslim world was under no such delusions of “self-worship” as more important than culture and tradition – in fact, the Muslim world fights actively against this.

This last cite from Belloc will take a bit of unpacking.  What have we seen since the time Belloc penned these words?  Moscow has disappeared as the purveyor of communist propaganda; it is no longer the source of destruction.  Yet, the war against the west (and there certainly is a war) is also not being led by Islam.  I return to Belloc’s words with which I began this essay:

It has always seemed to me possible, and even probable, that there would be a resurrection of Islam and that our sons or our grandsons would see the renewal of that tremendous struggle between the Christian culture and what has been for more than a thousand years its greatest opponent.

It seems it is even worse than Belloc imagined.  The sons and grandsons are not fighting for their Christian culture – the sons and grandsons are doing what they can, to include creating Muslim enemies, to destroy the last remnants of the Christian culture.  No invasion is necessary; they are welcomed and subsidized as guests.  King John III Sobieski could not be spinning faster in his grave, I believe.

Attribute it to Antonio Gramsci, Cultural Marxists and the Frankfurt School, or postmodernists – whichever you choose – the philosophy of destruction of western Christian culture is being driven by western leaders of western institutions: political, educational, social.

People in the west have allowed themselves to become impotent in this fight: beginning with the Renaissance and Reformation, continuing through the Enlightenment, the philosophy of the west has created the atomized individual.  Yet, as Belloc notes, “self-worship is not enough.”

I grow more and more struck by something my father said many years ago, when I made a stumbling effort to describe libertarianism to him.  He replied, “what, are you a communist?”  As has been true in dozens of examples before and since, his replies were much more profound than was my ability to understand.

“There goes bionic, throwing liberalism and libertarianism under the bus again.”

It seems to me that the west – and those persuaded by the non-aggression principle or something approaching it – has allowed a simple political idea of individual liberty to define all of man’s relationships and the whole of man’s relationship to his fellow man.  Yet this makes man impotent against those who would exploit the weakness in this philosophy.

I don’t mean impotent as in guns and defense (although it is quite true here); I mean impotent as in ideas, as in how to intellectually fight back.  Something more than a negative liberty must bind a community if that community is to remain in reasonable peace.  While “anything peaceful” is allowable under the non-aggression principle, it does not follow that “anything peaceful” is conducive to community – in the most freedom-supporting sense of the term.

Something or someone will organize society if it is to be a functional and thriving society. By creating and defending the atomized individual and ignoring culture and tradition (the “something”), with what intellectual weapon does the defender of individual liberty fight back against the strongman (the “someone”)?

He has none; he stands naked and alone (atomized) in front of his intellectual enemies, thus clearing the path for his mortal enemies.  Unobstructed and unopposed, they need no military to win this battle.

Previous article by Bionic Mosquito: Rothbardian Libertarianism We Can Agree on

Who Stole Our Culture?The Next Empire