Update 2: in another odd twist, on Monday morning, the US Navy’s official Twitter account posted just these words in quotes “Julian Assange” which it then quickly deleted. Wikileaks captured a screenshot of the tweet as shown below:

This morning, an inadvertent keystroke by an authorized user of the U.S. Navy Office of Information’s Digitial Media Engagement Team caused the trending term “Julian Assange” to be tweeted from the Navy’s official Twitter account (@USNavy). (1/2)

Shortly after, when the tweet was publicized, the account then tweeted shortly after, around noon that “an inadvertent keystroke by an authorized user of the U.S. Navy Office of Information’s Digitial Media Engagement Team caused the trending term “Julian Assange” to be tweeted from the Navy’s official Twitter account” and in a follow up tweet added that “the inadvertent tweet was briefly posted for a few second before it was quickly deleted by the same authorized user. The inadvertent tweet was sent during routine monitoring of trending topics.”

Yep. Especially considering I never asked for a reply from Navy. Who am I, just lil ole me, a nobody mom, that they would want to express this message? Did I hit on something I was not supposed to? I am NOT SUICIDAL or sick. #Q #Qanon #TheStorm #CBTS https://t.co/UYNiCxNgqT

Update: as of 9:30am ET, the @JulianAssange accounts has returned, although it appears to be a truncated or restored one, which shortly after its reappearance shows just over 1,000 followers.

Although as Lee Camp pointed out, “the first pic is the account that we were prevented from seeing for over 10 hours. The second is what’s “back.” The bio has changed and the new account is following 24 people …”

The first pic is the account that we were prevented from seeing for over 10 hours. The second is what’s “back.” The bio has changed and the new account is following 24 people … pic.twitter.com/aDI34zP1X7

Julian Assange’s Twitter account was mysteriously deleted on Christmas Eve, leaving perhaps the most important witness in the Trump-Russia investigation cut off from the rest of the world while he sits in the Ecuadorian Embassy in London.

This tweet by the WikiLeaks Task Force – an official WikiLeaks handle, suggested that people shouldn’t jump to conclusions, as “haters and conspiracy theorists rush to post the usual attention seeking rubbish,” before wishing everyone a Merry Christmas.

Meanwhile, Journalist Charles Johnson – who traveled with Rep. Dana Rohrabacher (R-CA) to London to meet with Assange in August, posted the following on Facebook after Assange’s Twitter account went down:

Some have suggested that the events are part of some Christmas-linked plan, although so far there has been no confirmation.

The account deletion comes on the heels of a break-in last Monday at the Madrid office of WikiLeaks lawyer Baltasar Garzon’s, in what police described as a “very professional” operation. Garzon told El Periodico and Ser magazine “They had not taken what they have been looking for,” and client security “has not been affected,” however police are analyzing his computer equipment to determine whether any files were taken or copied.

Hours after the break-in, Julian Assange published a tweet calling a Jimmy Dore video “Brilliant” – prominently featuring Assange’s interview with a Dutch television host in which the WikiLeaks founder strongly implies that slain DNC IT staffer Seth Rich was the source of emails published by WikiLeaks during the 2016 election.  (Assange clip at 21:30) 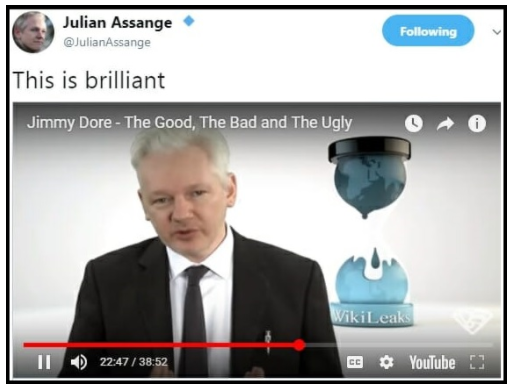 During the clip, Assange can be seen nodding his head in response to a question about Rich:

In August, Congressman Dana Rohrabacher travelled to London with journalist Charles Johnson for a meeting with Assange, where Rohrabacher said the WikiLeaks founder offered “firsthand” information proving that the Trump campaign did not collude with Russia, and which would refute the Russian hacking theory.

Rohrabacher brought that message back to Trump’s Chief of Staff, John Kelly, to propose a deal. In exchange for a presidential pardon, Assange would share evidence that would refute the Russian hacking theory by proving they weren’t the source of the emails, according to the WSJ.

“The possible “deal”—a term used by Mr. Rohrabacher during the Wednesday phone call—would involve a pardon of Mr. Assange or “something like that,” Mr. Rohrabacher said. In exchange, Mr. Assange would probably present a computer drive or other data-storage device that Mr. Rohrabacher said would exonerate Russia in the long-running controversy about who was the source of hacked and stolen material aimed at embarrassing the Democratic Party during the 2016 election.”

‘He would get nothing, obviously, if what he gave us was not proof,’ Mr. Rohrabacher said.

When Trump was asked in late September about the Assange proposal, he responded that he’d “never heard” of it, causing Rohrabacher to unleash on John Kelly, who he blamed for blocking the proposal from reaching the President, Rohrabacher told the Daily Caller:

“I think the president’s answer indicates that there is a wall around him that is being created by people who do not want to expose this fraud that there was collusion between our intelligence community and the leaders of the Democratic Party,” Rohrabacher told The Daily Caller Tuesday in a phone interview.

“This would have to be a cooperative effort between his own staff and the leadership in the intelligence communities to try to prevent the president from making the decision as to whether or not he wants to take the steps necessary to expose this horrendous lie that was shoved down the American people’s throats so incredibly earlier this year,” Rohrabacher said.

Contributing to the notion of deep-state interference, CIA director Mike Pompeo referred to WikiLeaks as a “hostile intelligence service” in April, calling Julian Assange “a fraud, a coward hiding behind a screen” for exposing information about democratic governments rather than authoritarian regimes. This quite the ironic statement, considering Pompeo used leaked emails from WikiLeaks as proof “the fix was in” against President Trump.

Mike Pompeo was sharing Wikileaks documents on his Congressional Twitter account less than a year ago pic.twitter.com/cl5P6vnXSE

Let’s also not forget Donald Trump proclaiming “I Love Wikileaks!” less than a month before the 2016 election.

So Julian Assange – ostensibly the most important witness in the Russia hacking investigation, offered to prove that Russia was not the source of the leaked emails in exchange for a pardon. This proposition was conveyed through Rep. Dana Rohrabacher to White House Chief of Staff John Kelly, who Rohrabacher says never allowed the deal to reach Trump for consideration.  Months later, WikiLeaks attorney Baltasar Garzon’s office was raided in a “very professional” operation which is being labeled an attempted robbery. Hours after the break-in, Julian Assange tweets a Jimmy Dore video containing his own strong implication that Seth Rich was the source of the leaked emails, and six days later his Twitter account is gone.

That said, tweets directly from the WikiLeaks urge not to jump to conclusions.

Assange’s account deletion also comes on the heels of several new Twitter rules rolled out on December 18, which many feared was the beginning of a “purge” of conservative accounts over user behavior both on and off the platform. The rules are aimed at people who associate with hate groups that “use or promote violence against civilians to further their causes” – however nothing Assange has done comes close to fitting that description.

So did Julian Assange delete his Twitter account – and if so, why? Was this yet another rogue Twitter employee lashing out on their last day, as was the case with President Trump’s temporary account deletion in early November? Or did Twitter delete the account of one of the most important figures in the 2016 election.

Bombs Away THIS Is Socialism