Forget Trump---Goldberg, Prager, and D’Souza muddle facts to sell books all the time.

While you are here…For the last 15 years, our magazine has endeavored to be your refuge from the nasty partisan politics and Washington echo chamber with thoughtful, smart conservatism, fresh and challenging writing, and authors who, above all, bravely hew to our most basic tenets: Ideas over ideology, principles over party. Please consider a tax-deductible, year-end contribution so that TAC can make an even bigger difference in 2018!

A new anthology of the writings of intellectual historian David Gordon contains a devastating review of Jonah Goldberg’s Liberal Fascism. Reading it reminded me how bad GOP propaganda dressed up as “history” can really be.

David takes no prisoners in his acidic analysis of bad books, and I am still eagerly awaiting his savaging of Dinesh D’Souza’s latest attempt to treat the Democratic Party as the American version of the German Nazi Party. Needless to say, what I’m complaining about goes well beyond Jonah’s bestseller, although it can’t hurt to begin with this prime example. Gordon shows how many howlers I missed in all my own diatribes against this book. In addition to pushing a badly substantiated comparison between fascists and Nazis (Jonah runs the two together) and Hillary Clinton Democrats, Goldberg fills his stem-winder with errors that even a moderately intelligent editor should have caught. He attributes to worthies Martin Heidegger and Jean-Jacques Rousseau positions that, as Gordon explains, were diametrically opposed to those that these figures actually expressed. One can easily doubt whether Goldberg ever read a word of either thinker. 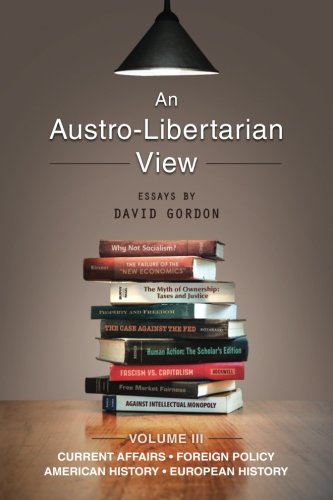 He also mistakes the Jacobins during the French Revolution for communists, and has Napoleon battling “the Austro-Hungarian Empire,” which was not created until 1867. Contrary to Goldberg’s statement, Napoleon was “Emperor of the French,” not “Emperor of France,” since his authority supposedly emanated from the French people. The English Nazi-sympathizer, Unity Mitford, did not “have to leave the country, incensed that Hitler would fight such progressive leaders as Hitler.” As Gordon notes, Mitford was in Germany at the time that England declared war. She even tried to commit suicide when the two countries went to war against each other and was sent under Hitler’s supervision to a hospital in Munich to be treated and to convalesce. To my knowledge, there is no evidence that Unity viewed Hitler as a “progressive,” and certainly not in the manner in which American Democrats regarded Hillary Clinton. In the “notorious Tuskegee syphilis experiment,” fascist Democrats committed a true atrocity when “poor black men were allegedly infected with syphilis without their knowledge.” No such experiment ever occurred, as David explains: “Rather men, who already had syphilis were deceived into thinking they were being treated for their illness.” If President Trump sometimes blurts out questionable facts, one comes away from Gordon’s review believing that next to Goldberg, the Donald is a practitioner of scientific method.

Let me note that such inexcusably sloppy editorializing posing as scholarship has becoming increasingly characteristic of the conservative movement as a media phenomenon. Editorial opinions dressed up as as scholarship and then placed in book form and mass-marketed have become part of the new highbrow conservatism. Sometimes the errors can be easily corrected, for example, when Weekly Standard and National Review ascribe almost exclusive responsibility for World War I to a premeditated German plan to conquer Europe. The Craft of International History by the distinguished diplomatic historian Marc Trachtenberg shreds this utterly unfounded view. Not insignificantly, Trachtenberg’s learned tome was published by Princeton University. But of course I’m assuming that those who are mired in error want to learn the historical truth. It’s entirely possible they don’t. Going after the Germans for World War I as well as World War II may be good for fund-raising purposes.

Where Was Oswald During the Assassination?Another Lying Movie