“This is one of the most important books ever written including, for the first time, how JFK’s orders for a preemptory air strike against the Cuban Airforce, canceled at the last minute doomed the Bay of Pigs invasion.” – Roger Stone

In the mid-twentieth century, global communism was one of the biggest threats America ever faced.  After defeating Nazi totalitarianism in World War II, America faced the challenge of becoming even more vigilant against communists trying to seize global power.

Political leaders emerged to dedicate their careers to fighting communist infiltration and influence.  A new book looks at the lives of three such leaders who became the vanguard against the rising tide of global communism.

Betrayal at Bethesda: The Intertwined fates of James Forrestal, Joseph McCarthy and John F. Kennedy explores how within a 14–year span, each man died an untimely death, with their dead bodies all winding up in the same location: The National Naval Medical Center in Bethesda, Maryland. 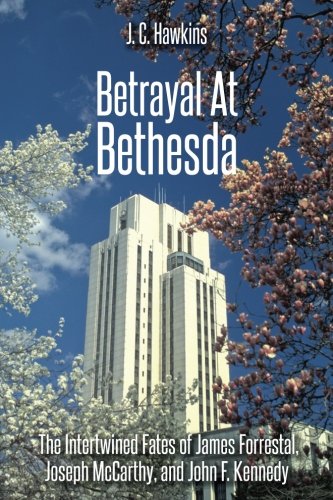 Florida-based author J.C. Hawkins believes these men were too closely connected in their political beliefs and careers for their deaths to be written off as simply coincidence or unrelated.

His research has resulted in an expose that challenges the historical record and conventional wisdom surrounding each man’s death.  Consider these basic facts:

On May 22, 1949, former Secretary of Defense James Forrestal fell to his death from the sixteenth floor of the Naval Medical Center in Bethesda. An investigation by a Navy review board found no definitive cause for his death, which was assumed by many to be suicide.

On May 2, 1957, Senator Joseph McCarthy died from acute hepatitis at the Bethesda hospital. Just a few days earlier, he’d been admitted to the hospital with a knee injury. No cause for the hepatitis was ever given. No autopsy was conducted.

On November 22, 1963, President John F. Kennedy was assassinated while visiting Dallas, Texas.  An autopsy conducted at the Bethesda Naval Medical Center late that evening resulted in controversy over the extent of the president’s wounds and how they ultimately were caused.  The wounds viewed by many eyewitnesses in Dallas and Bethesda weren’t reflected in the final Warren Commission report.

In each instance, Hawkins found serious discrepancies in the official accounts of the deaths, which led him to believe mysterious, sinister forces were at work, and that each death had a cascading effect on the ones that followed.

The author also uncovered strong personal ties among the three men, relationships that had a long-lasting impact on each of them.

“The old saying, ‘history repeats itself’ certainly applies here,” notes Hawkins.  “Media reports about each of the deaths were the original ‘fake news.’  What we today call the ‘Deep State’ was certainly in existence in the aftermath of World War II and during the Cold War.”

He adds, “My theory is shocking because it dispels a false historical narrative that’s become the conventional wisdom.  These three patriots have been wrongly depicted by leftists in academia and the media. They deserve better.”

“James Forrestal is labeled a mentally disturbed individual who killed himself.  Joe McCarthy is besmirched as a witch-hunting drunkard and bully.  And John Kennedy endures a second assassination, this time of his character because of shortcomings in his personal life.”

The book offers groundbreaking insight into how these major events became so misconstrued and misunderstood.