“It is long past time for Congress to take action on gun safety to save innocent lives,” said Bernie Sanders. According to Igor Volsky of Guns Down and the Center for American Progress: “It’s not enough to just limit the kind of people who own guns. You have to go after the guns themselves. Guns are the problem.” Joe Biden opined: “How long do we let gun violence tear families apart? Enough. Congress & the WH should act now to save lives. There’s no excuse for inaction.” Black Lives Matter agitator and New York Daily News columnist Shaun King blamed the shooting on “white privilege.”

But the strangest reaction did not come from a Democrat, a progressive, or a liberal. It came from a conservative. Bret L. Stephens joined the New York Times as an op-ed columnist in 2017 after a long career with the Wall Street Journal. Stephens, a neoconservative, argues in his book America in Retreat: The New Isolationism and the Coming Global Disorder that America should be the world’s policeman.

In an opinion piece for the New York Times, titled “Repeal the Second Amendment,” Stephens declares that he has “never understood the conservative fetish for the Second Amendment.” From a law-and-order standpoint, “more guns means more murder.” From a personal-safety standpoint, “more guns means less safety.” From a national-security standpoint, “the Amendment’s suggestion that a ‘well-regulated militia’ is ‘necessary to the security of a free State,’ is quaint.” From a personal liberty standpoint, “the idea that an armed citizenry is the ultimate check on the ambitions and encroachments of government power is curious.” 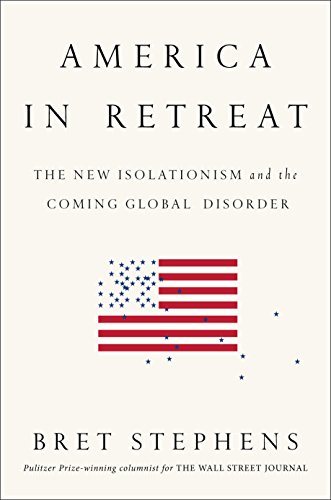 Stephens correctly points out the “endless liberal errors of fact”:

Stephens doesn’t support “gun buyback” programs, deeming that they make “little sense in a country awash with hundreds of millions of weapons.” He believes that “keeping guns out of the hands of mentally ill people is a sensible goal,” but that “due process is still owed to the potentially insane.” And although he thinks that “background checks for private gun sales are another fine idea,” their “effects on homicides will be negligible: guns recovered by police are rarely in the hands of their legal owners.”

But Stephens maintains that “Americans who claim to be outraged by gun crimes should want to do something more than tinker at the margins of a legal regime that most of the developed world rightly considers nuts.” Americans “should want to change it fundamentally and permanently.” He sees only one way to do this: “Repeal the Second Amendment.”

Stephens recognizes that “repealing the Amendment may seem like political Mission Impossible today,” but is hopeful because “in the era of same-sex marriage it’s worth recalling that most great causes begin as improbable ones.” He maintains: “Gun ownership should never be outlawed, just as it isn’t outlawed in Britain or Australia. But it doesn’t need a blanket Constitutional protection, either.”

Stephens and Cohen, like the vast majority of Democrats and Republicans in Congress, the media, and the general public, misconstrue the nature of the Second Amendment.

The Second Amendment confers no positive right. It recognizes a pre-existing right. It is an additional limitation on federal power to infringe upon gun rights besides the fact that no authority is granted to the federal government in its limited, enumerated powers to infringe upon them in the first place.

Only once in American history was a constitutional amendment repealed. The Twenty-first Amendment of 1933 repealed the Eighteenth Amendment of 1920 that instituted Prohibition. What would happen if the Second Amendment were repealed?

If the Second Amendment didn’t exist, Americans would still have the natural right to keep and bear arms. This is because there is no authority granted to the federal government by the Constitution to ban, regulate, or otherwise infringe upon the right of the people to keep and bear arms.

If anything should be repealed it is all federal gun laws—even the ones supported by Republicans and conservatives.

America a god-Nation? What Happened to My Profession?