A Day in the Life of the Empire

Most Americans went about their business that day without ever suspecting that what the White House called “an unusual and extraordinary threat to our national security” had suddenly popped up.

It wasn’t as though the United States was insufficiently engaged in war at the time.  That very day the U.S. Central Command announced that in the period of just a few hours beginning the previous day it had conducted five new air strikes in Syria and nine in Iraq as part of Operation Inherent Resolve.

At the time Saudi Arabia was within weeks of going to war in Yemen with airstrikes that would rely on U.S. targeting and surveillance support.  U.S. drone attacks had been ongoing in Yemen for years

President Obama’s declaration of a national emergency occurred on the same day, March 9, that the Pentagon announced the deployment of 3,000 troops to the Baltics for military exercises.  The mission, “Operation Atlantic Resolve,” included some 750 US Army tanks, fighting vehicles, and other equipment.  The deployment coincided with two weeks of NATO naval exercises in the Black Sea that got underway the next day. 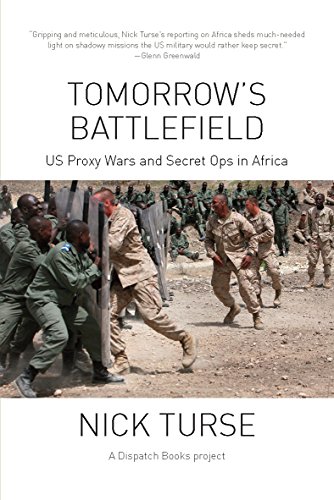 Meanwhile, as a part of Operation Atlantic Resolve, Lieutenant General Ben Hodges, commander of United States Army forces in Europe, was busy preparing for the launch of “Operation Dragoon Ride.”  In less than two weeks he would send convoys of armored vehicles and soldiers rolling across Eastern Europe.  Altogether U.S. European operations in the spring and summer of 2015 consisted of some two dozen training missions, exercises, and deployments.  U.S. activities culminated with Operation BALTOPS, a NATO Baltic Sea exercise with 50 warships and 5,6oo participants from 17 nations.

It was on March 9 as well, that Defense News reported on a $1 billion administration funding package called European Reassurance Initiative, linked to Operation Atlantic Resolve, which included $70 million in May – September U.S. Army construction projects in Eastern Europe.  A follow-up story described projects in six countries — Estonia, Latvia, Lithuania, Poland, Romania and Bulgaria –  that demanded the shipment of 160 pieces of heavy engineering equipment overseas, and include the construction of two-lane tanks trails, storage facilities and other buildings.  Such projects are designed in part as wealth transfer programs to ingratiate the U.S. with allies by subsidizing local economies with infrastructure, resource, and local payroll spending.

Also that day, March 9, Samantha Power, the U.S. ambassador to the United Nations was busy urging European countries to increase their military commitments to the U.N.   Speaking in Brussels, Power cited U.S. military personnel already involved in around 100 countries around the world.  Even at that number Power understated the case.

At the same time the administration was busy preparing more military aid for the government that it helped install in the 2014 Ukraine coup.  Vice President Joe Biden called President Poroshenko two days later to announce the news of a $75 million package consisting of 30 armored Humvees and 200 other Humvees, along with radios, counter-mortar radar, night-vision devices and aerial drones.

As it happened, on the very day that President Obama revealed an extraordinary new threat to our national security, the U.S. Supreme Court rejected appeals in cases involving U.S. treatment of detainees in Guantanamo Bay, including a suit over torture of a Syrian man.

Asia is included in the global appetite of the U.S. warfare state.  On the day at issue, March 9, the U.S. Naval Institute published a piece urging the establishment of a Navy International Maritime Operations Center headquartered in Indonesia “to showcase the Navy’s commitment to the Asia-Pacific, monitor maritime developments in the South China Sea and Indian Ocean and serve as a new mechanism to meet China’s rise.”

Also on March 9, the U.S. Africa Command(!) wrapped up three weeks of its Operation Flintlock military exercises in Chad, with additional operations in Niger, Nigeria, Cameroon and Tunisia.  The Special Operations Forces exercises involved more than 1,000 personnel from over 20 countries.  Unknown to most Americans, missions in Africa are soaring.  Nick Turse, author of  Tomorrow’s Battlefield: U.S. Proxy Wars and Secret Ops in Africa, wrote that in 2014, “U.S. troops were carrying out almost two operations, exercises, or activities — from drone strikes to counterinsurgency instruction, intelligence gathering to marksmanship training — somewhere in Africa every day.”

It wasn’t until the brouhaha surrounding President Trump’s call of condolence to the widow of La David Johnson, one of four U.S. soldiers killed Oct. 4, 2017 in action in Niger, that even congressmen had any idea of the breadth of US military activities in Africa. Befuddled senators like Chuck Schumer and Bob Casey admitted they did not even know there were US troops in Niger.  “We don’t know exactly where we’re at in the world, militarily, and what we’re doing,” said Lindsay Graham.

With all that reach into the far places of the globe, the wheels were in motion on the day of our examination for a domestic U.S. military exercise on a scale unprecedented in recent decades.   An easily overlooked agenda item in a small west Texas county announced that on March 9 the commissioners of Howard County would hear a presentation for a U.S. Army Special Operations Command’s three-month training exercise called Jade Helm 15.  Operating in seven western states (California, Nevada, Arizona, Utah, Colorado, New Mexico, and Texas), and involving elite units of all four branches of the military, Jade Helm was the largest domestic military training exercise since the 1950s.

Back in Washington in the midst of all this military hyperactivity, even as Obama announced the latest national emergency on March 9, 47 Senate Republicans sent a letter to Iran’s political leaders clearly designed to torpedo the nuclear deal with the United States that was within reach.  The senators warned Iran that it would be “nothing more than an executive agreement.”

A month later the principal author of the patronizing letter, Senator Tom Cotton, was confidently arguing that military action against Iran would only take “several days.”  It was an assessment that quickly called to mind similar assurances before President Bush’s “cakewalk” war in Iraq. (Secretary of Defense Rumsfeld: “It could last, you know, six days, six weeks. I doubt six months.”)

With its frenzied, ubiquitous activity it is no wonder the U.S. Department of Defense is the largest employer in the world.  The US “defense” budget at the time was about that of the next 12 countries combined.  And yet with all that military activity around the world, a new threat had reached the proportions of a national emergency on March 9, 2015, one that the president could no longer ignore.  The national security state responded to the grave threat by opening up a new front.  The White House put out a statement to explain:

President Obama today issued a new Executive Order declaring a national emergency with respect to the unusual and extraordinary threat to the national security and foreign policy of the United States posed by the situation in Venezuela.”

Even worse, an “unusual and extraordinary” threat?

Venezuela had a GDP that is less than that of New Jersey, only 1/30 that of the U.S.  The U.S. has a military budget 160 times larger.

Venezuela had 192 tanks; the U.S. has almost 9,000.  If Venezuela were to mount an invasion of the United State, it would take a miracle for it to land one or two boats on Florida’s gold coast or on the Jersey shore.

If a military assault was a preposterous idea, by raising the specter of a national emergency was the president suggesting instead an imminent terrorist attack by Venezuela?  But then invoking economic sanctions – freezing the assets of seven individuals — is hardly a response if to a deadly terrorist threat.

Despite having the world’s largest oil reserves, Venezuela is badly broken.  It is a model of banana republic economics.  Venezuela bumps along with Cuba and North Korea in the bottom three in the 2016 Heritage Foundation/Wall Street Journal Economic Freedom Index.

If a bankrupt and crumbling Venezuela represents an “unusual and extraordinary threat” to U.S. national security and foreign policy, as President Obama asserted in his March 9, 2015 executive order, the America people should demand a refund of the trillion dollars a year they have been spending on the national security state.

In fact, Obama knew that Venezuela posed no such threat to American security.  Indeed, it is the Empire that poses a threat to Venezuelan security, the U.S. having supported a military coup there in 2002.  In a diplomatic spat with a failing dictatorship, one that resists U.S. hegemony but otherwise is like many others the U.S. has supported and subsidized around the world, Obama has wrenched the plain meaning of our language out of coherence to declare an emergency and order sanctions against a handful of Venezuelan officials.

It is a revealing episode.  Clearly no national emergency or extraordinary threat from Venezuela exists, but whenever the impulse to meddle arises, whatever the diplomatic issue involves, as its first response the Empire declares danger to the American people and invokes the national security state, the ultimate recourse of which is war.

The Empire’s universal application of military responses is straight out of the Establishment’s game plan, the Washington “playbook” that Obama would later acknowledge, the one “that presidents are supposed to follow.”

President Trump has been handed the Washington playbook.  He appears to like it.  “It’s a playbook that comes out of the foreign-policy establishment,” said Obama.  “And the playbook prescribes responses to different events, and these responses tend to be militarized responses.”

At the UN in September, Trump repeated threats he had made earlier of US military intervention in Venezuela.  That was the same speech in which Trump announced that we will “totally destroy North Korea” if we have to.

From his serial threats to Iran to his re-escalation in Afghanistan, every play appears to come from the same playbook.  The president also announced at the UN that “we will be spending almost $700 billion on our military” in FY 2018.

Calvin Coolidge may have been right that a century ago the business of America was business.  Today the global business of the U.S. government is warfare.  But even warfare comes in different sizes.

Not long ago, Secretary of State Madelaine Albright wondered what was the good having a mighty military if we don’t use it.  Trump, with his compulsion to outdo everyone, may or may not have said he wanted to increase the US nuclear arsenal by tenfold.  It sounds like Trump, but reports differ. But he has even outdone Albright by asking what is the point of having nuclear weapons if we can’t use them.

Previous article by Charles Goyette: These People Frighten Me

Reason Is Whiteness Trial of Cliven Bundy and Sons Begins