Consider, if you will, these two indisputable facts.  First, the United States is today more or less permanently engaged in hostilities in not one faraway place, but at least seven.  Second, the vast majority of the American people could not care less.

Nor can it be said that we don’t care because we don’t know.  True, government authorities withhold certain aspects of ongoing military operations or release only details that they find convenient.  Yet information describing what U.S. forces are doing (and where) is readily available, even if buried in recent months by barrages of presidential tweets.  Here, for anyone interested, are press releases issued by United States Central Command for just one recent week:

Ever since the United States launched its war on terror, oceans of military press releases have poured forth.  And those are just for starters.  To provide updates on the U.S. military’s various ongoing campaigns, generals, admirals, and high-ranking defense officials regularly testify before congressional committees or brief members of the press.  From the field, journalists offer updates that fill in at least some of the details — on civilian casualties, for example — that government authorities prefer not to disclose.  Contributors to newspaper op-ed pages and “experts” booked by network and cable TV news shows, including passels of retired military officers, provide analysis.  Trailing behind come books and documentaries that put things in a broader perspective. 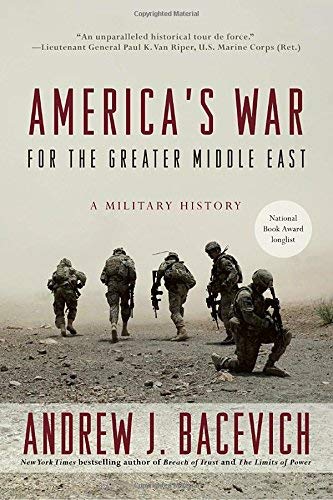 But here’s the truth of it.  None of it matters.

Like traffic jams or robocalls, war has fallen into the category of things that Americans may not welcome, but have learned to live with.  In twenty-first-century America, war is not that big a deal.

While serving as defense secretary in the 1960s, Robert McNamara once mused that the “greatest contribution” of the Vietnam War might have been to make it possible for the United States “to go to war without the necessity of arousing the public ire.” With regard to the conflict once widely referred to as McNamara’s War, his claim proved grotesquely premature.  Yet a half-century later, his wish has become reality.

Why do Americans today show so little interest in the wars waged in their name and at least nominally on their behalf?  Why, as our wars drag on and on, doesn’t the disparity between effort expended and benefits accrued arouse more than passing curiosity or mild expressions of dismay? Why, in short, don’t we give an [expletive deleted]?

Perhaps just posing such a question propels us instantly into the realm of the unanswerable, like trying to figure out why people idolize Justin Bieber, shoot birds, or watch golf on television.

Without any expectation of actually piercing our collective ennui, let me take a stab at explaining why we don’t give a @#$%&!  Here are eight distinctive but mutually reinforcing explanations, offered in a sequence that begins with the blindingly obvious and ends with the more speculative.

Americans don’t attend all that much to ongoing American wars because:

1. U.S. casualty rates are low. By using proxies and contractors, and relying heavily on air power, America’s war managers have been able to keep a tight lid on the number of U.S. troops being killed and wounded.  In all of 2017, for example, a grand total of 11 American soldiers have been lost in Afghanistan — about equal to the number of shooting deaths in Chicago over the course of a typical week. True, in Afghanistan, Iraq, and other countries where the U.S. is engaged in hostilities, whether directly or indirectly, plenty of people who are not Americans are being killed and maimed.  (The estimated number of Iraqi civilians killed this year alone exceeds 12,000.) But those casualties have next to no political salience as far as the United States is concerned.  As long as they don’t impede U.S. military operations, they literally don’t count (and generally aren’t counted).

2. The true costs of Washington’s wars go untabulated.  In a famous speech, dating from early in his presidency, Dwight D. Eisenhower said that “Every gun that is made, every warship launched, every rocket fired signifies, in the final sense, a theft from those who hunger and are not fed, those who are cold and are not clothed.”  Dollars spent on weaponry, Ike insisted, translated directly into schools, hospitals, homes, highways, and power plants that would go unbuilt.  “This is not a way of life at all, in any true sense,” he continued.  “[I]t is humanity hanging from a cross of iron.” More than six decades later, Americans have long since accommodated themselves to that cross of iron.  Many actually see it as a boon, a source of corporate profits, jobs, and, of course, campaign contributions.  As such, they avert their eyes from the opportunity costs of our never-ending wars.  The dollars expended pursuant to our post-9/11 conflicts will ultimately number in the multi-trillions.  Imagine the benefits of investing such sums in upgrading the nation’s aging infrastructure.  Yet don’t count on Congressional leaders, other politicians, or just about anyone else to pursue that connection.

3. On matters related to war, American citizens have opted out.  Others have made the point so frequently that it’s the equivalent of hearing “Rudolph the Red-Nosed Reindeer” at Christmastime.  Even so, it bears repeating: the American people have defined their obligation to “support the troops” in the narrowest imaginable terms, ensuring above all that such support requires absolutely no sacrifice on their part.  Members of Congress abet this civic apathy, while also taking steps to insulate themselves from responsibility.  In effect, citizens and their elected representatives in Washington agree: supporting the troops means deferring to the commander in chief, without inquiring about whether what he has the troops doing makes the slightest sense.  Yes, we set down our beers long enough to applaud those in uniform and boo those who decline to participate in mandatory rituals of patriotism.  What we don’t do is demand anything remotely approximating actual accountability.

4. Terrorism gets hyped and hyped and hyped some more. While international terrorism isn’t a trivial problem (and wasn’t for decades before 9/11), it comes nowhere close to posing an existential threat to the United States.  Indeed, other threats, notably the impact of climate change, constitute a far greater danger to the wellbeing of Americans.  Worried about the safety of your children or grandchildren?  The opioid epidemic constitutes an infinitely greater danger than “Islamic radicalism.”  Yet having been sold a bill of goods about a “war on terror” that is essential for “keeping America safe,” mere citizens are easily persuaded that scattering U.S. troops throughout the Islamic world while dropping bombs on designated evildoers is helping win the former while guaranteeing the latter.  To question that proposition becomes tantamount to suggesting that God might not have given Moses two stone tablets after all.

5. Blather crowds out substance. When it comes to foreign policy, American public discourse is — not to put too fine a point on it — vacuous, insipid, and mindlessly repetitive.  William Safire of the New York Times once characterized American political rhetoric as BOMFOG, with those running for high office relentlessly touting the Brotherhood of Man and the Fatherhood of God.  Ask a politician, Republican or Democrat, to expound on this country’s role in the world, and then brace yourself for some variant of WOSFAD, as the speaker insists that it is incumbent upon the World’s Only Superpower to spread Freedom and Democracy.  Terms like leadership and indispensable are introduced, along with warnings about the dangers of isolationism and appeasement, embellished with ominous references to Munich.  Such grandiose posturing makes it unnecessary to probe too deeply into the actual origins and purposes of American wars, past or present, or assess the likelihood of ongoing wars ending in some approximation of actual success. Cheerleading displaces serious thought.

6. Besides, we’re too busy.  Think of this as a corollary to point five.  Even if the present-day American political scene included figures like Senators Robert La Follette or J. William Fulbright, who long ago warned against the dangers of militarizing U.S. policy, Americans may not retain a capacity to attend to such critiques.  Responding to the demands of the Information Age is not, it turns out, conducive to deep reflection.  We live in an era (so we are told) when frantic multitasking has become a sort of duty and when being overscheduled is almost obligatory.  Our attention span shrinks and with it our time horizon.  The matters we attend to are those that happened just hours or minutes ago.  Yet like the great solar eclipse of 2017 — hugely significant and instantly forgotten — those matters will, within another few minutes or hours, be superseded by some other development that briefly captures our attention.  As a result, a dwindling number of Americans — those not compulsively checking Facebook pages and Twitter accounts — have the time or inclination to ponder questions like: When will the Afghanistan War end?  Why has it lasted almost 16 years?  Why doesn’t the finest fighting force in history actually win?  Can’t package an answer in 140 characters or a 30-second made-for-TV sound bite?  Well, then, slowpoke, don’t expect anyone to attend to what you have to say.

7. Anyway, the next president will save us.  At regular intervals, Americans indulge in the fantasy that, if we just install the right person in the White House, all will be well.  Ambitious politicians are quick to exploit this expectation.  Presidential candidates struggle to differentiate themselves from their competitors, but all of them promise in one way or another to wipe the slate clean and Make America Great Again.  Ignoring the historical record of promises broken or unfulfilled, and presidents who turn out not to be deities but flawed human beings, Americans — members of the media above all — pretend to take all this seriously.  Campaigns become longer, more expensive, more circus-like, and ever less substantial.  One might think that the election of Donald Trump would prompt a downward revision in the exalted expectations of presidents putting things right.  Instead, especially in the anti-Trump camp, getting rid of Trump himself (Collusion!  Corruption!  Obstruction!  Impeachment!) has become the overriding imperative, with little attention given to restoring the balance intended by the framers of the Constitution.  The irony of Trump perpetuating wars that he once roundly criticized and then handing the conduct of those wars to generals devoid of ideas for ending them almost entirely escapes notice.

8. Our culturally progressive military has largely immunized itself from criticism.  As recently as the 1990s, the U.S. military establishment aligned itself with the retrograde side of the culture wars.  Who can forget the gays-in-the-military controversy that rocked Bill Clinton’s administration during his first weeks in office, as senior military leaders publicly denounced their commander-in-chief?  Those days are long gone.  Culturally, the armed forces have moved left.  Today, the services go out of their way to project an image of tolerance and a commitment to equality on all matters related to race, gender, and sexuality.  So when President Trump announced his opposition to transgendered persons serving in the armed forces, tweeting that the military “cannot be burdened with the tremendous medical costs and disruption that transgender in the military would entail,” senior officers politely but firmly disagreed and pushed back.  Given the ascendency of cultural issues near the top of the U.S. political agenda, the military’s embrace of diversity helps to insulate it from criticism and from being called to account for a less than sterling performance in waging wars.  Put simply, critics who in an earlier day might have blasted military leaders for their inability to bring wars to a successful conclusion hold their fire.  Having women graduate from Ranger School or command Marines in combat more than compensates for not winning.

A collective indifference to war has become an emblem of contemporary America.  But don’t expect your neighbors down the street or the editors of the New York Times to lose any sleep over that fact.  Even to notice it would require them — and us — to care.

Reprinted with permission from TomDispatch.com.

No More Consent of the Conned?US Tested Carcinogenic Chemicals on Unknowing Canadian Civilians