That Wasn't No Dog Whistle

Who would have thought the red hot war of words between Kim Jong-un and the Donald could be wiped right off the cable gab-a-thons in just one weekend. But the Charlottesville riots did exactly that, thereby delivering still another cautionary tale about the unhinged times now upon us.

So we will say it again. The boys and girls buying the dip again this morning are out of their ever-lovin’ minds because this weekend did not really bring a respite from the Korean crisis. Instead, the Charlottesville override was yet another nothing event that was blown into a massive Cable Spectacle because it provided still another excuse to hound, denounce and vilify the nation’s legitimately elected president.

Indeed, the market should be selling off not on account of Korea anyway because the generals are not about to let the Donald start a nuclear war. The punters and gamblers should actually be heading for the hills because the Imperial City is on the verge of a thundering political/constitutional/fiscal crisis that will soon hit the world’s financial markets like a ton of TNT.

To begin with, it wasn’t the riots and the antics of a few hundred abhorrent white supremacists, skinheads and neo-nazis that triggered the 8-box marathon of righteous indignation on CNN, MSNBC, etc. It was the Donald shooting from the hip again. You only need to watch his Saturday press conference twice to see that he ad libbed the part about “many sides”.

With that inartful quip, the media pontificators and scolds were off to the races. The Donald’s mention of the absolutely true point that there was violence, hatred and bile flowing from both sides—–the thugs of “Unite the Right “and the ruffians of Black Lives Matter and the AntiFa brigades—was instantly transformed into an implied endorsement of white supremacy; and actually worse: New evidence that the Donald is a crypto-fascist and back at his alleged dog whistling game of egging on the racist “deplorables” that allegedly elected him (with Putin’s help, of course!).

But the Donald’s not a racist or a fascist. He’s just a naïve dope. Had he not bulled himself up like a Staten Island police captain huffing and puffing about law and order, he could have simply delivered the message VP Pence issued a few hours later and resumed his truly menacing war of words with the Fat Boy of Pyongyang. Said our 45th President in waiting,

“We have no tolerance for hate and violence fromwhite supremacists, neo Nazis or the KKK. These dangerous fringe groups have no place in American public life and in the American debate, and we condemn them in the strongest possible terms.”

There it is, full stop. For crying out loud there were probably no more than 500 +/- of these demented white nationalist whack jobs at the event, but double or triple that number of anti-right protestors. And while a goodly share of the latter where honest citizens expressing disgust at the hateful message of Unite the Right, the opposition crowd was heavily infiltrated by militant left-wing activists centered on an entity called AntiFa. The latter is in the business of violently attacking the rights of speech and assembly by anyone deemed to be a racist or fascist.

In fact, and by pure coincidence, the Donald’s point about “many sides” had been inadvertently reinforced several days earlier when one of cable TV’s more unctuous liberal scolds, Peter Beinart, published a long form piece in the Atlantic entitled “The Rise of the Violent Left”, which thoroughly exposed AntiFa as essentially an anarchist horde of street brawlers.

The latter have their roots in Germany’s 1930’s radical left, and have suddenly gained energy and momentum by treating Trump as Hitler reincarnate. As catalogued by Beinart, AntiFa has been stoking anti-Trump violence all across the country since election day. Alas, the clueless CNN anchors barely mentioned its presence—–let alone the fact that its vanguards were equipped with clubs, shields, mace, knives and more.

Or as Jim Kunstler incisively described it, “In their black battle garb and masks, they resemble the very fascist mobs of the 1930s that the name “Antifa” supposedly evokes as its enemy.”

Likewise, in his Atlantic piece, Peter Beinart catalogued the group’s depredations so far this year as follows:

As far-flung as these incidents were, they have something crucial in common. Like the organizations that opposed the Multnomah County (Portland OR)Republican Party’s participation in the 82nd Avenue of Roses Parade, these activists appear to be linked to a movement called “antifa,” which is short for antifascist or Anti-Fascist Action…….

…….Those responses sometimes spill blood. Since antifa is heavily composed of anarchists, its activists place little faith in the state, which they consider complicit in fascism and racism. They prefer direct action: They pressure venues to deny white supremacists space to meet. They pressure employers to fire them and landlords to evict them. And when people they deem racists and fascists manage to assemble, antifa’s partisans try to break up their gatherings, including by force.

…….The violence is not directed only at avowed racists like Spencer: In June of last year, demonstrators—at least some of whom were associated with antifa—punched and threw eggs at people exiting a Trump rally in San Jose, California. An article in It’s Going Down celebrated the “righteous beatings.”

A few weeks after the attacks in San Jose, for instance, a white-supremacist leader announced that he would host a march in Sacramento to protest the attacks at Trump rallies. Anti-Fascist Action Sacramento called for a counterdemonstration; in the end, at least 10 people were stabbed. A similar cycle has played out at UC Berkeley. In February, masked antifascists broke store windows and hurled Molotov cocktails and rocks at police during a rally against the planned speech by Yiannopoulos.

….The result is a level of sustained political street warfare not seen in the U.S. since the 1960s.

Needless to say, the Donald’s “all sides” comment did not lead to any expose about the provocations of Beinart’s storm-troopers in Charlottesville, but to a vicious, all-out assault on Trump personally by his Democratic opponents and their media collaborators.

Thus, the liberal Dem mayor of Charlottesville went right for the jugular, blaming a fiasco that actually arose from the city’s PC campaign to remove the statute of Robert E. Lee, on Trump for inflaming racial prejudices during his campaign last year. Said Mayor Michael Signer,

“I’m not going to make any bones about it. I place the blame for a lot of what you’re seeing in American today right at the doorstep of the White House and the people around the president,” he said.

That is just plain ridiculous, but more or less paraphrases the non-stop coverage of the event after a demented misfit from Ohio plowed his car into the opposition crowd, thereby turning a two-way brawl into a national morality drama.

And that was just the beginning. Already this morning, the CEO of Merck, Ken Frazier, resigned from the President’s Manufacturing Counsel as a “matter of personal conscience,” saying:

“I am resigning from the President’s American Manufacturing Council……..America’s leaders musthonor our fundamental values by clearly rejecting expressions of hatred, bigotry and group supremacy, which run counter to the American ideal that all people are created equal. 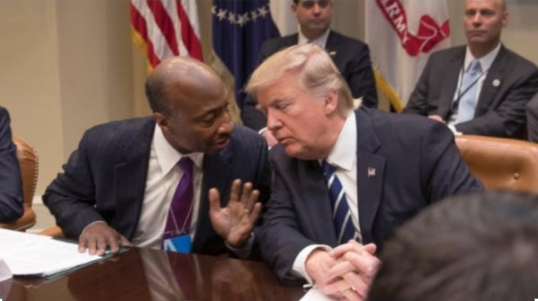 Needless to say, the above picture was snapped in happier times, but Trump wasted no time firing right back at Frazier:

Now that Ken Frazier of Merck Pharma has resigned from President’s Manufacturing Council,he will have more time to LOWER RIPOFF DRUG PRICES!

Here’s the thing. Donald Trump is his own worst enemy and has now proven to have a skin so thin that he should be considered a political hemophiliac. He’s going to bleed out at his own hand.

In this morning’s incident, for example, he chose to blast the only black man on his 28-member national manufacturing Council in a context in which the core issue is that he has been falsely accused of racism. You can’t get any denser than that!

So it is no wonder the main stream media can carry on its anti-Trump jihad with impunity. The Donald’s utter inability to let any slight or perceived insult go unanswered is providing constant fuel for an endless round of media magnified political “crises” that are not really anything of the sort.

The fact is, in a society of 325 million people there are always going to be a few thousand crazies inhabiting dozens of fringe nooks and crannies, and from time to time their antics, anger and depredations are going to disturb the social peace in the unfortunate localities where they erupt. Ordinarily, they burn out quickly and that should be the end of the matter, as it should have been in Charlottesville.

But we are in a different ballgame now. The campaign against Trump has become so deeply rooted and institutionalized in the Imperial City and its media collaborators that every outbreak of politically incorrect behavior—–both in the form of innocent pro-Trump rallies and in despicable white supremacist agitation—-is going to be hyped and dramatized to a farethewell by the national media as another episode in a rolling indictment.

It is already too late for a reset by the White House. The anti-Trump campaign is determined to see it through until he is removed from office, and we don’t see any evidence that this outcome can be avoided.

Indeed, over the weekend it took only a few hours for a covey of establishment GOP politicians and political rivals like Little Marco (Rubio) and Crazy Ted (Cruz) to pile on with denunciations of Unite the Right that were only thinly disguised digs at the Donald’s inartful statement on the matter. We have insisted that he is increasingly Home Alone in the Imperial City and this was just one more straw in the wind.

Even now less than 48 hours after the original offense, Trump’s forthright statement on the matter has not put the incident to rest. Said the Donald,

Racism is evil and those that cause violence in its name are criminals and thugs – including the KKK, Neo-nazis, white supremacists, and other hate groups that are repugnant to everything we hold dear as Americans”…

But apparently it was too late for the naming of names. NBC’s snarky White House reporter, John Harwood, spoke for the hot and bothered forces arrayed against the Donald when he tweeted within minutes of the President’s belated statement,

……grudging. bare minimum. no indication he was feeling the words he was reading.

So, yes, this weekend’s contretemps was not about dog whistling at all. But there was nevertheless plenty of signaling——-namely, that the powers that be are going in for the kill.

US Immigration HistoryHow To Pay for Tax Cuts