Eric Voegelin: A Philosopher of Crisis

Many people, I suspect, find themselves in this position. They have heard that Eric Voegelin is a great philosopher of history, much esteemed by such eminent conservatives as Willmoore Kendall, Russell Kirk, and Mel Bradford, and that he and Leo Strauss rank as the most influential political theorists of the contemporary American Right.1 They eagerly obtain a copy of Voegelin’s most comprehensive work, Order and History. They are intrigued by the book’s opening: “The order of history emerges from the history of order”; but after reading a few pages, they turn away in bafflement. Though he can on occasion write with great beauty, Voegelin’s style is often dense and his train of thought difficult to follow. Even the great economist Murray Rothbard once told me that he found Voegelin’s “leap in being” unfathomable.

Reading Voegelin is well worth the effort his demanding books require, and Jeffrey C. Herndon’s insightful new book Eric Voegelin and the Problem of Christian Order offers a useful guide to an important part of Voegelin’s work.2 Before turning to it, however, it will be helpful to look at the historical situation that formed Voegelin’s thought. Mark Lilla here grasps the essential point. In an excellent survey article on Voegelin, Lilla remarks: “In the twentieth century, European history writing became a kind of Trümmerliteratur, a look back at the civilization that collapsed in 1933 . . . or 1917, or 1789, or further back still. . . . Edmund Husserl spoke for many German thinkers when he declared, in a famous lecture just before the Second World War, that ‘the “crisis of European existence” . . . becomes understandable and transparent against the background of the teleology of European history that can be discovered philosophically.’”3

How did the Nazis, a gang of brutal thugs, succeed in gaining power in Germany? Once Hitler attained power, why did the Western powers fail to stop him before his bid for European mastery? To Voegelin, as the quotation from Lilla suggests, these questions were of prime importance. Only a spiritual collapse could explain the failure to resist such an obvious menace. 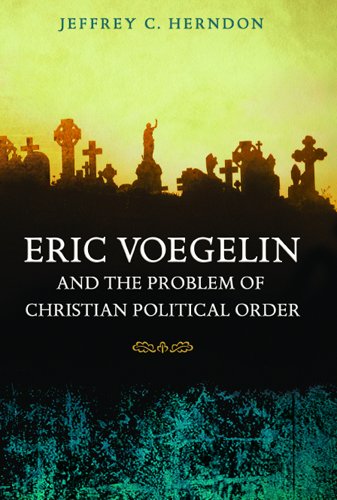 But we must here avoid a misleading impression. Voegelin was by no means a head-in-the clouds philosopher who was never willing to descend from the empyrean to analyze mundane events. Quite the contrary; he often had penetrating and unusual insights on political affairs. He once told me he thought that Britain, blinded by ideology, had wrongly insisted on sanctions against Italy after its invasion of Ethiopia, thus driving Mussolini into alliance with Hitler. He also contended that Christian Science had exercised a deleterious pacifist influence on such British appeasers as Lord Lothian and recommended that I read Christopher Sykes’s biography Nancy: Lady Astor for background on the issue. (Although I’m fairly familiar with the literature on World War II origins, I’ve never seen anyone else make this point.)

His insights were by no means confined to the 1930s. He sharply rejected the influential book by Fritz Fischer, Griff nach der Weltmacht (1961), which placed near-exclusive blame on Germany for the First World War. (He thought that the only decent German prose in the book was in some of the letters of Kaiser Wilhelm that it included.) He said that the diplomatic crisis after the Austrian ultimatum to Serbia should have been settled though a conference of the Great Powers. The smaller nations such as Serbia should have been told, “taisez-vous!”

To cope with political upheaval, Voegelin believed that severe measures were required. He points out in The New Science of Politics, his most popular book, and elsewhere that if one adds the votes for the Nazis and the Communists in the last years of the Weimar Republic, one obtains a large majority of the population in favor of revolutionary overthrow of the existing order. In this circumstance, the ruling authorities would have been justified in suspending ordinary democratic rule. Voegelin supported for this reason the clerical regime of Engelbert Dollfuss, which was willing to act forcibly to counter revolutionary violence; and in his The Authoritarian State, buttressed with learned citations from Ernest Renan and the French jurist Maurice Hauriou, he offers a detailed defense of emergency authoritarian rule.4 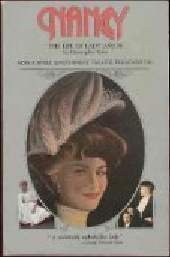 This might stave off immediate disaster, but as I suggested earlier, a deeper problem—spiritual crisis—finally had to be confronted. Voegelin believed that order in society is much more than a political problem in the conventional sense. Besides the everyday world, there is a transcendent realm: human beings exist in tension between it and the world we grasp through the senses. Voegelin calls this tension the In-Between or, using a term of Plato’s, the Metaxy. The transcendent cannot be described in language that is literally true: myth and symbol are our only recourse. As he puts the point in his philosophically deepest book, The Ecumenic Age, Plato “is aware of the limits set to the philosopher’s exploration of reality by the divine mystery. . . . Since the philosopher cannot transcend these limits but has to move in the In-Between, the Metaxy, . . . the meaning of his work depends on an ambiance of insight concerning the divine presence and operation in the cosmos that only the myth can provide.”5

But what has all this to do with politics? Voegelin thought that the rulers of a society must mirror their society’s conception of cosmic order in the way they organize the government. In doing so, it is vital that the governing authorities preserve the tension between the human and divine realms.

If this requirement is flouted, disaster threatens. If, e.g., a society thinks that God’s kingdom on earth can be established, its futile attempt to overcome the tension in which human beings exist will result in tyranny or chaos. Voegelin thought that this “derailment of being” paralleled the ideas of the Gnostics, a movement that flourished in the first few centuries of the Christian era. As the name suggests, the Gnostics believed in salvation through the possession of esoteric knowledge. In like fashion, Voegelin argues, Comte’s positivism, Marxism, and Nazism contend that human nature can be completely remade under the guidance of a revolutionary elite. In seeking to bring an end to the tension between human beings and the divine, these movements “immanentize the eschaton,” as Voegelin famously 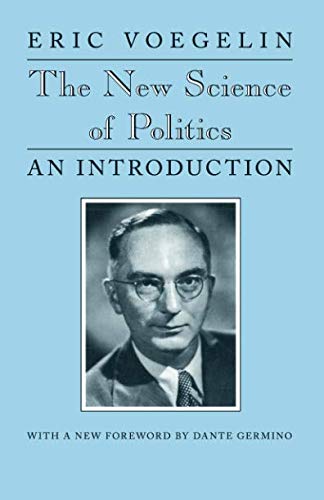 put it in The New Science of Politics.6 That is to say, these movements treat the symbol of the end of history as if it were a project that can be achieved in ordinary time.

Voegelin’s analysis of totalitarianism differs on a crucial point from the view of Hannah Arendt in her famous The Origins of Totalitarianism. Voegelin and Arendt knew each other, and he clarified the difference between them in a notable review of her book, to which she responded. He thought that she correctly saw that totalitarian movements aimed to change human nature. “This is, indeed, the essence of totalitarianism as an immanentist creed movement.” But “I [Voegelin] could hardly believe my eyes” that Arendt did not rule out such a change as impossible. For Voegelin, the structure of being is unchangeable: precisely because of this, attempts to alter it lead to disaster.7

Voegelin’s view that society represents cosmic order may strike those new to it as hard to grasp. Here Herndon’s book offers considerable help. Before Voegelin wrote Order and History he planned a massive History of Political Ideas. This he abandoned as unsatisfactory, but Herndon thinks that, to a large extent, it reflects Voegelin’s mature views. The History has the advantage of presenting certain aspects of Voegelin’s thought in more detail than is available elsewhere. Herndon gives us a detailed account of one part of this massive treatise; he covers the period from the rise of Christianity to the Reformation.8 Someone new to Voegelin who reads Herndon’s book will get a good grasp of the basics of Voegelin’s thought.

Herndon brings out that for Voegelin, Saint Paul devised a series of “compromises” that enabled the Christian community to survive and grow in the world. These compromises preserved the necessary tension between the divine and human: in doing so they enabled the members of the community to achieve concord (homonoia). Herndon remarks, “Christian homonoia as understood by Saint Paul was no mean achievement in history.”9 Herndon ably expounds the extensions and alterations of the Pauline compromises in the Middle Ages, culminating in the thought of Thomas Aquinas.10(Herndon might have mentioned the great influence on Voegelin’s account of the Holy

Roman Empire of Alois Dempf’s Sacrum Imperium.) The Reformation overthrew the delicate balance between the divine and the human described at its best in Aquinas’s thought, though never fully achieved in practice; and Voegelin is scathing in his account of Luther and Calvin as political thinkers. Luther divorced the political world from the sacred; worse yet, Calvin attempted to construct an immanent universal Christianity. Herndon comments, “If Voegelin’s treatment of Luther was harsh, his examination of Calvin borders on the scandalous.”

What are we to make of all this? I find Voegelin’s thought impressive and his erudition staggering; but it seems to me that he fails to address a fundamental issue. Why should we accept what he says about the nature of being? Voegelin often does not give arguments for his views; indeed, in these matters, he distrusts the use of propositions altogether. For him, the mystical insights of certain great thinkers, Plato foremost among them, are primary, and Voegelin devotes most of his philosophical attention to an exposition of the myths and symbols of these thinkers. He was certainly capable of argument: to see this one has only to examine in The Authoritarian State the nimble dialectics he uses to analyze the new constitution proposed for the Dollfuss regime. But he thought that its place in philosophy was distinctly minor. I well remember one conversation in which he several times corrected me for referring to a philosopher’s “position,” a word he deemed unacceptably ideological.11

Voegelin also is open to challenge about the way he thinks society represents the cosmic order. Why must it be the ruling authorities who establish the order of society? In the classical liberal view, such matters belong entirely to civil society. Why should the police and defense departments decide how human society represents God? To ask this question is not at all to challenge Voegelin’s assumption that society mirrors cosmic order.12

Although Voegelin had been a member of the private seminar of the great Austrian economist Ludwig von Mises and had a good understanding of free-market economics, he dismissed what he considered extreme or dogmatic classical liberalism. He treated John Locke with scorn, hardly viewing him as a major thinker at all. The great classical liberal Charles Comte was for him someone who wished to overthrow the order of being. For Voegelin a strong state is essential.

I disagree with Voegelin here, for reasons set out elsewhere. But accept or reject the fundamental tenets of Voegelin’s thought, no one who studies him can fail to benefit from his insights and synoptic vision.13

First published: February 2008. This article is reprinted with the author’s permission.