A President’s War on the Media

After CNN was forced to retract yet another fake news story about “Russian collusion” it did what all Leftists do when caught in a lie:  It played “victim.”  It did so by claiming that President Trump’s calling out of the fake story, which CNN now admits was a fake, was an attack on freedom of speech in America.  So, according to CNN, publishing fake “news” is free speech, while pointing out the truth is an attack on free speech.

To hammer home the point that it, CNN, is the nation’s protector of free speech, the network attempted to taunt the president on the Fourth of July by tweeting an inscription that is chiseled into a wall at the “Newseum” in Washington, D.C.  They apparently thought that this would be a death blow to the president, for the quote was from the god of the state, Abe Lincoln.  “Let the people know the facts, and the country will be safe,” Abe supposedly said.  Yes, just let them “know” that Vladimir Putin personally hypnotized Donald Trump, turning him into a Manchurian candidate, and then rigged all the election machinery in the United States to assure his election.  They will then be “safe” to know that Hillary Clinton is their real president.

Unfortunately for CNN, the Lincoln quote is more fake news because the quote itself is a fake, as proven by several researchers and reported by The Federalist Web site.  How telling –and appropriate — that CNN and the “Newseum” invoke this fake Lincoln quote as their motto.  Lincoln was a tyrant and a dictator with regard to the media, shutting down over 300 opposition newspapers in the North during the War to Prevent Southern Independence and imprisoning their editors and owners without due process.  No other president has ever come close to being as big an enemy of freedom of the press. 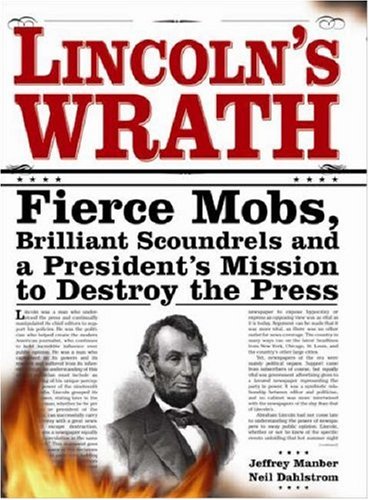 As historian Dean Sprague wrote in Freedom Under Lincoln, in a chapter entitled “The Policy of Repression,” the “first step” in Lincoln’s “program against the anti-war newspapers” in the Northern states “had to start with the muzzling of the New York press” (p. 142).  The New York papers “dominated much of the nation,” meaning that many other newspapers followed their lead in reporting the news and editorializing on it.  The Journal of Commerce was the most influential of the New York newspapers, and it published a list of over 100 other Northern newspapers that had editorialized against the war in early 1861.

Most newspapers at the time were delivered by mail, so the Lincoln administration ordered the Postal Service to cease delivering the opposition newspapers.  Eventually, they began arresting (without due process, since Habeas Corpus had been illegally suspended) editors who persisted in selling their papers.  The editor of the New York Freeman’s Journal, James McMasters, was especially heroic in his defense of his paper and of free speech.  Consequently, Secretary of State William Seward (from New York) orderd federal marshals to “arrest [McMasters] and send him to Fort Lafayette.”  Fort Lafayette in New York Harbor was at the time used as a gulag where political critics of the Lincoln administration were rounded up and imprisoned.

Such repression taught many of the other papers a lesson:  criticize the Lincoln administration and you, too, will be dragged off to Fort Lafayette.  Consequently, the New York newspapers “had been silenced by the end of September 1861,” writes Sprague (p. 149).  But then there were other newspapers elsewhere in New York state, from Long Island to the Canadian border, that commenced criticism of the Lincoln regime.  They soon received the same treatment from Seward, Lincoln’s media henchman, and were silenced.  Then “the mania for arrests [of opposition newspaper editors] soon spread outside New York State.  Pennsylvania suffered greatly” (p. 151).

Another book that describes Lincoln’s 1861 “summer of rage” against free speech in the Northern states is Lincoln’s Wrath: Fierce Mobs, Brilliant Scoundrels and a President’s Mission to Destroy the Press, by historians Jeffrey Manber and Neil Dahlstrom.  During that summer, “Republicans around Lincoln systematically shut down all dissenting voices.  Editors and writers of antiwar newspapers were subjected to myriad punishments.  Some were tarred and feathered, some were thrown into federal prisons and held without trial for months at a time.  Others were forced to change their opinions and publish only glowing praise of the government actions” (p 2).

This enabled the state to fabricate a fake history that eliminates “a forgotten generation of editors, writers, and publishers” who dared to express “their anger that the Constitution was being trampled” by Lincoln.  These men were outraged at “Lincoln’s willingness to shut down any loyal opposition” (emphasis added).  At the same time, pro-Lincoln newspapers were subsidized with tax revenues to cement into place the fake history of the war that was being fabricated by Lincoln and the Republican Party.

Lincoln believed that he had the “right” to redefine the Constitution in whatever way he personally preferred, the formal amendment process be damned.  Treason” is defined by Article 3, Section 3 of the Constitution as “only” levying war upon the United States, or giving aid and comfort to their enemies.  The word “their” is all important here, for it means “United States” is in the plural, i.e., the individual states being united to form a confederacy. Treason is levying war upon the individual, free and independent states.  That of course is exactly what Lincoln was doing – levying war upon the states of the South.  He chose to redefine treason to mean instead any criticism of himself and his policies.  That was the basis of the mass arrest of hundreds of newspaper editors and owners, and thousands of other Northern citizens suspected of being critics of government policy.

All of this is why it is totally appropriate that the words of Lincoln, of all people, are literally engraved in a wall at the Fake News “Newseum” in Washington, D.C.

Woods and RockwellEnd the Korean War