The Economic Collapse Began Long Ago

By Gerold
The Burning Platform

My forty-year old Godson was belly-aching about the lack of jobs. He whined it’s all the Boomers’ fault.

I tore a few strips off him. I asked him WTF am I wasting my time researching and writing these articles if he doesn’t read them. Since I had him cornered, I told him a few things he obviously didn’t want to hear.

We are in an economic depression. It was predicted in Strauss and Howe’s 1997 book “The Fourth Turning” [Link]  that occurs every four generations as a time of great turmoil. Their Generational Theory is a framework which explains where we are, how we got here and where we’re going. For more details see ‘Notes” at end.

This is a ‘Stealth Depression.’ The government is doing its utmost to hide it with fake statistics. Their ass media handmaidens are carrying their water telling us everything is wonderful. And, if my Godson believes the ass media, he deserves his fate.

Note: there’s a difference between inflation (increased money supply) and Consumer Price Index (CPI), but I used the terms interchangeably to make it easier for my Godson to understand.

Anyone who buys stuff or reads John Williams ShadowStats [Link] knows that the actual inflation rate in 2017 is roughly 5% and NOT the bullshit 2% (or less) that the government claims. I say “roughly” because I rounded the numbers to make it easier for him to understand.

I wish I could have shown him the ShadowStats graph below.

The government claims that (inflation adjusted) 2017 GDP growth is roughly 2%. Since it’s understated by 3%, it means the economy is “growing” at negative 1%. In other words, the economy is SHRINKING by 1%. And, that’s only this year.

Looking at the chart again, you’ll see that since 2001, the real inflation rate (the blue line based on non-manipulated methodology) bounced between 2% and 9%. This means the government’s bullshit inflation rate was understated between 0% and 7%. The ‘mean’ (roughly average) overstatement is roughly 3% to 5% since 2001.

The “magic of compounding interest” is often called the eighth wonder of the world. If you earn a small percentage every year and keep reinvesting your earnings, the growth rate eventually goes exponential. And the sooner you start, the more you make. I wish I could have shown him the chart below that shows the difference ten years can make. 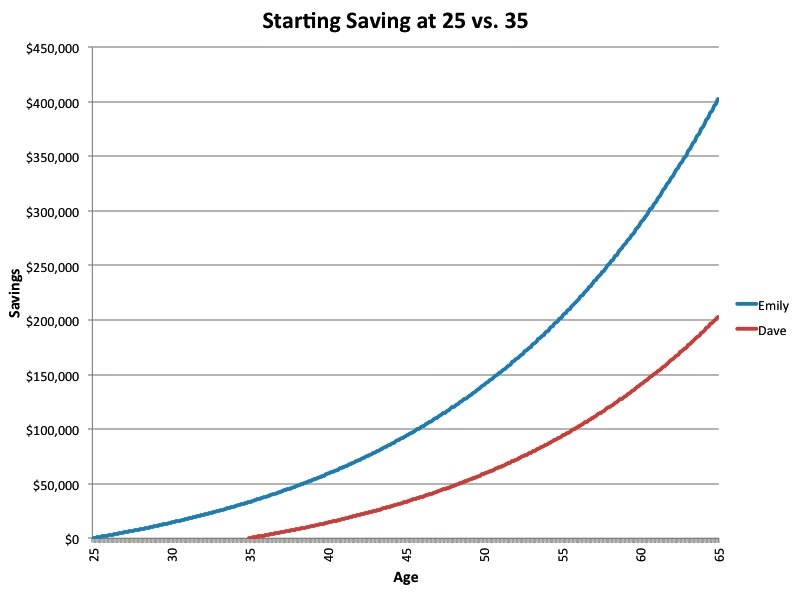 The trouble is; it works in reverse, too. If the economy shrinks ‘only’ a couple of percent every year before too long the economic decline also goes exponential. The economy has been shrinking roughly 3% to 5% for the last sixteen years. Because of the magic of compounding interest, the economy is less than HALF what it once was when you factor in the REAL rate of inflation. More people, less than half the pie.

Now, do you see why everything’s gone for shit? Now, do you see why so many people are out of work, or if they do have jobs, why they cannot make ends meet? Even good jobs pay half what they once did. Lousy jobs pay even less. Bullshit inflation statistics hide the real decline.

Anyone waiting for “The Collapse” can stop waiting; it began years ago and will continue for a long time. There’ll be shocks and lurches along the way. The U.S. dollar will strengthen as the Euro declines and capital flees into the dollar. Cash will be banned starting with large denomination bills; it already has been in India. Years ago, Satyajit Das admitted they can’t stop the collapse; all they can do is try to engineer a soft landing.

And, never mind the ‘nominal’ pay (dollar amount) of wages. Purchasing power is declining and the Middle Class is slowly dying. Dollars are worth less every year. Zimbabwe was a perfect, if extreme, example. They were printing trillion dollar bills that couldn’t buy a loaf of bread. Everyone was a trillionaire, yet everyone was starving.

Never in history has there been so much debt worldwide; household debt, corporate debt and government debt. The graph below is consumer (household) debt. 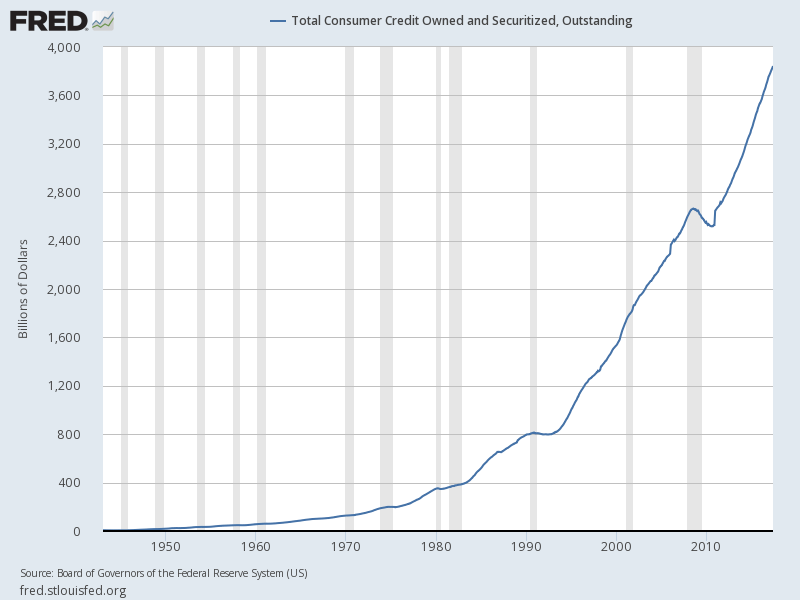 And, the graph below is corporate debt. Notice the small box showing how little corporate debt declined during the ‘Great Financial Crisis” of ’08. Now imagine what happens when the idiots at the Fed and other central banks increase interest rates and all this debt becomes more expensive to service? More on that later. 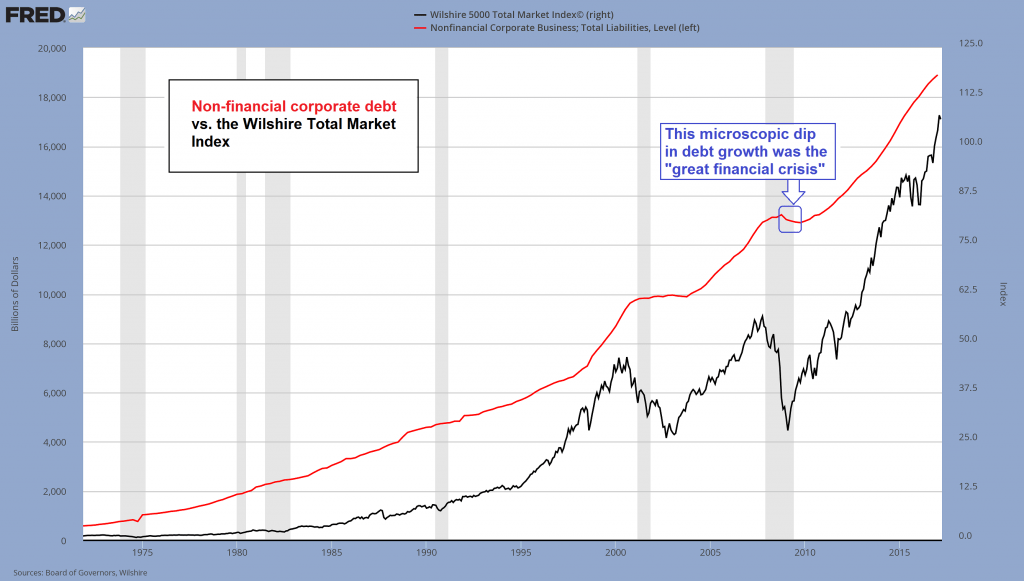 Nowadays, money is based on nothing tangible. Money is now created with debt, and they need more debt to pay the interest on the bonds that created this debt/credit/money in the first place. We’ve reached a point where there isn’t even enough money in existence to pay the interest let alone touch the principle. Consequently, everything is slowly turning to shit.

Once you understand this, many things fall into place:

Factory orders fell to where they were a decade ago [Link]  Inventories (especially autos) are rising. Credit spreads can’t get much lower. The U.S. dollar is on the decline, yet commodity prices are unchanged which means they’re deflating when adjusted for the REAL inflation rate. The U.S. corporate tax rate is among the highest of industrialized nations. Some production is returning to the U.S., but it’s performed by robots.

Stock markets give the illusion of recovery, but there are fewer retail investors. In addition to the Federal Reserve-Treasury Ponzi scheme, the corporate sector has been the primary buyer of their own stocks (“buy-backs”) since the Crash of ’08 as companies take advantage of ultra-low interest rates.

Few people appreciate the power of demographics which is the study and analysis of population dynamics over time or space. North America has a cohort of 80 million boomers, the first of who are turning 70 this year. Millions of boomers will do so every year for the next 15 years. Many will live to age 85 or longer.

The power of this demographic is seen in the two charts below. The first one shows the U.S. population aged 70+. The second shows their share of the overall population. 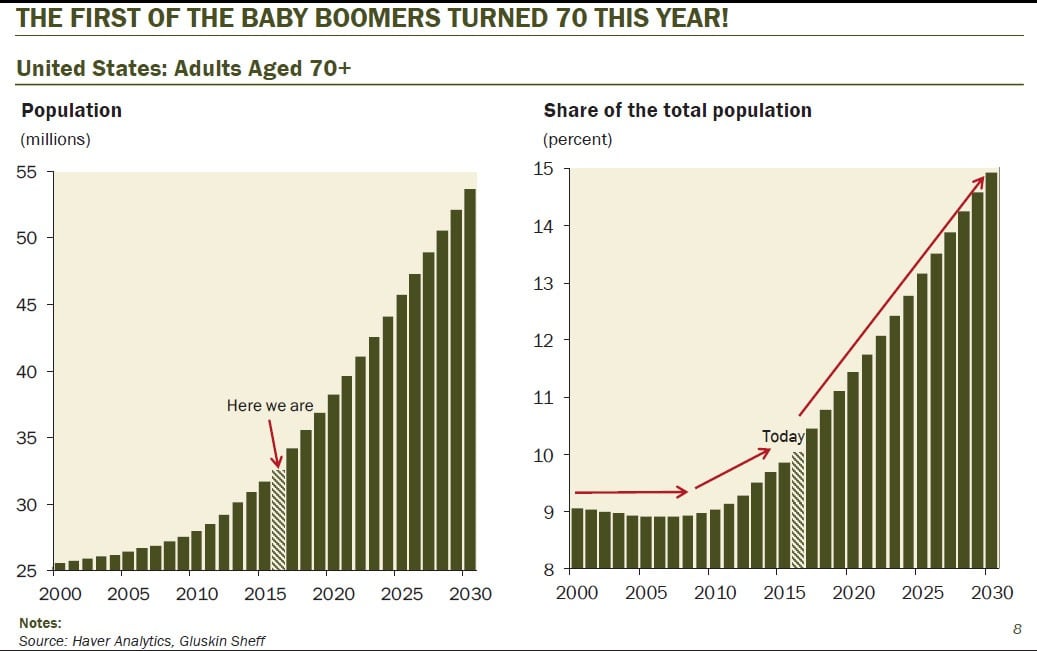 Other than government employees, few people have a defined benefit pension plan. Most boomers have less than $100,000 in retirement savings. Given today’s low interest rates, bonds don’t pay much and even Blue Chip stock dividends are only slightly higher. Consequently, aggregate growth in incomes will decelerate and pose additional deflationary pressure on the economy.

Those who can retire will have a lot of time on their hands. They’ll spend money on experiences such as travel, tourism and restaurants, but a lot less on clothing, durables and housing. Demographics is indeed destiny.  [Link]

Boomers are spending less, but younger generations are not picking up the slack. Malls are empty or closing. Stores are going bankrupt at an unprecedented rate. It’s not all because of online shopping because online shopping has not increased as much as the decrease in bricks & mortar. [Link] Few people have money except the 0.1%. As George Carlin used to say “It’s a big club and you ain’t in it.”

Oil prices are plunging not because of the over-supply governments and the ass media want us to believe, but because of lack of demand. We’re in a Stealth Depression. Fewer people have money to buy gas or jobs to drive to.

Banks Are Scheming To Dominate The Dynamics of a Riot