A Jeffersonian American Patriot is a State Patriot

One day in January 1811, Thomas Jefferson wrote to a French man of letters whose book he so much admired that he translated it into English and saw to its American republication. Along the way, he explained to the Frenchman why there had been such a difference between the outcomes of their countries’ revolutions. “The true barriers [defenses] of our liberty in this country,” Jefferson instructed, “are our State governments; and the wisest conservative power ever contrived by man, is that of which our Revolution and present government [the Federal Government] found us possessed.”

There were seventeen American states in 1811, and so much the better. Such a large number of polities could never fall under the sway of a single demagogue. No American general would overthrow the American republics and remake them into an empire. “The republican government of France,” the former president said, “was lost without a struggle, because the party of ‘un et indivisible’ had prevailed.” Bereft of regional power centers, France fell under the center’s dictatorship, which soon became a military one. (As Napoleon put it, he found a crown in the gutter and picked it up.) Such a thing could not happen here.

Imagine Jefferson’s surprise at learning that all over America this Fourth of July, people will solemnly intone a Pledge of Allegiance including the very phrase, and supporting the very principle (“one … indivisible,” that is, “un … indivisible”), he blamed for the failure of the French Revolution. We know that not amnesia, but a coordinated campaign of disinformation about the American Revolution and the nature of the American regime, explains this fact.

In the past several weeks, a new Jefferson biography including the claim that American nationalism was Jefferson’s life’s work has received high accolades in American media. The book omits much of the evidence to the contrary I lay out in careful detail—an entire chapter’s worth—in Thomas Jefferson—Revolutionary: A Radical’s Struggle to Remake America. The short of it is that Jefferson first came to continental attention with a 1774 pamphlet insisting that the colonies were distinct communities tied to Britain only via a common king; that pamphlet clearly implies that there was no colonial legal tie among the colonies at all. 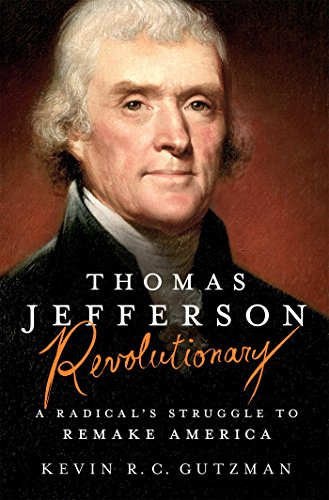 Jefferson insisted on the principle of the states’ centrality in North American political life over and over and over, to the point of writing to a powerful political ally in 1799 mentioning that a “scission” (secession) was an option. As he put it then:

We are … determined … to sever ourselves from that union we so much value, rather than give up the rights of self-government which we have reserved….

Even though coming from the vice president of the United States, this ought to be no surprise: his Declaration of Independence declared precisely such a “scission” (that is, secession). The author of that new Jefferson biography points out that Jefferson never returned to such explicit talk of secession after 1799. I answer that while this may be true, he did on several occasions say things consistent with it, and he never recanted it. In the closing weeks of his life, Jefferson returned to the defense of Virginia’s rights vis-à-vis the Federal Government in a haughty tone one final time.

In July 2017, I have traveled across much of New England without seeing Maine, New Hampshire, Massachusetts, Rhode Island, or Connecticut flags. It seems that in their hearts, Americans have become Frenchified in a profoundly anti-Jeffersonian way. It reminds me of the scene of “A Man for All Seasons” in which Sir Thomas More asks Roper whether he would cut down all the laws in order to get at the devil, and told yes, Roper would cut down every law in England to get at the devil, More says to him, “And when the last law was down, and the Devil turned round on you—where would you hide, Roper, the laws all being flat? This country’s planted thick with laws from coast to coast … and if you cut them down … do you really think you could stand upright in the winds that would blow then? Yes, I’d give the Devil benefit of law, for my own safety’s sake.”

When the states are all cut down, and the Bonaparte turns ‘round on you, fellow citizen, where will you hide, the states all being flat? “The true barriers of our liberty in this country,” Jefferson instructed, “are our State governments; and the wisest conservative power ever contrived by man, is that of which our Revolution and present government found us possessed.”

The purpose of the Revolution was to protect our inheritance, not leave it undefended against the winds of un … indivisible nation’s democratic desire. Remember that this Independence Day.

Tricked on the 4th of JulySpeeding Is a Capital Offense