The War on Cash: Old and New

Before the United States ran aground on the dangerous reefs of State interventionism and centralism, the dollar was not only a sign of stability but also a symbol of human freedom. A dollar was a means to express your wants and commands to the business class. The consumer, for the most part, was sovereign. Any American could save, consume, and invest his money whose value was not debauched by a government in the lack of resources. To this day, and despite the evils of inflationism and central banking, the dollar remains an instrument of freedom and independence for many Americans. There are those, however, who would like to change that. They are the Wall Street financiers, politicians, anointed intellectuals, and central bankers for whom a centralized control of the money supply is not enough. To them, not only the supply of money but also the free and innocent use of money should be strictly limited and regulated by the State. Their new enemy is the banknote and their new war is the war on cash.

It is said of Heraclitus that he wrote that “no man ever steps in the same river twice, for it is not the same river and he is not the same man.” The river has changed indeed and so has changed the war on cash. It is an irony of American history that in the 1830s and 1840s, the war on cash meant something totally different than today. In the middle of the 19th century, the circulation of banknotes was synonymous with the excesses of fractional reserve banking and the debasement of the currency. At the time, the war on cash was a war for sound money. 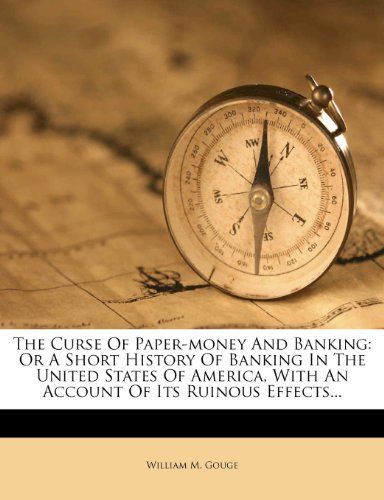 Because banks were emitting banknotes unbacked by gold, the hard money Jacksonians adopted slogans such as “No Monopolies!” “No Union of Banks and State!” “Jackson and Hard Money!” “Gold before Rags!” In 1834, William Leggett, with his typical wit and gusto, called the banks the “incorporated rag-money factories.” and argued for the ban of small banknotes. Similarly, in his book The Curse of Paper-Money and Banking (1833), another hard-money Jacksonian, William Gouge wrote:

If the virtue and intelligence of the nation should direct the movements of Government during the ten or twenty years which might elapse in the gradual withdrawal of Bank notes and Bank credits, the people would suffer less from the application of the remedy, than they must otherwise suffer from the operation of the disease. … If a State Government, after having prohibited the issue of notes of a less denomination than five dollars, should afterwards be prevailed on by a complaint of “want of money” to repeal the law, it would act with the same wisdom as a surgeon, who, being engaged in the amputation of a diseased limb, should be frightened by the cries of the patient, and withdraw his knife after having cut through the first artery.

Gouge granted that the sudden ending of the old banking system, especially the prohibition of all banknotes, “would be ruinous” to the economy. His solution was to start banning small notes and proceed gradually to those with highest denominations. Although in 1833 Gouge proposed that the minimum denomination be $5, he later became more radical and by 1837 he held that the minimum should be “$50 or perhaps $100.”

Gouge’s policy remained popular among economists and as late as 1897 the famous American economist Frank Taussig argued that a way of achieving the circulation of gold was to prohibit banknotes of denominations of $20 and smaller.

The situation today is entirely different. The gold standard is not here to limit the power of both banks and of the central government. Gold and silver coins disappeared from circulation and banknotes are now bank reserves instead of gold. Once a curse, cash under the form of banknotes is now a blessing. Banknotes are the instrument through which people can avoid excessive taxation, government surveillance, and the recklessness of our incestuous banking system. Banning cash, on the other hand, is the most efficient way to impose negative interest rates on depositors and making any unsupervised spending impossible. Cash, in other words, is a blessing for the productive people who wish to protect the money they peacefully earned from the vicious schemes of governments and central banks.

It would be a mistake, nonetheless, to think that the outright ban of cash will be the preferred method of our fiat-money lords. The most efficient and vicious method they can use is simply inflation while refusing to emit any new banknotes with higher denominations. The purchasing power of a $20 bill in 1960, for instance, is equivalent to the purchasing power of about $165 today. With only 2% inflation rate, the value of a $100 bill will be divided by two every 35 years. Inflation will be enough to impede the use of cash in current transactions. Once unusable, cash will not be able to limit both credit expansion and monetary disturbances generated by central banks.

Hence, the words written by the hard-money Jacksonian William Leggett in 1837 in his article The Credit System and the Aristocracy seem more relevant than ever before:

[Our State banking system] is instituted to provide sinecures for a band of gentlemen pensioners. It was conceived in the stew of legislative prostitution, born in corruption, and smells to heaven with the rank odour of hereditary rottenness. How long will freemen — or men claiming to be free — consent to have this bastard offspring of fraud and folly for their master? How long will they consent to be the cringing vassals of a feudal system instituted for the support of such a contemptible baronage as our paper-money lords?

But no monopoly, not even the State, has infinite power. Our paper-money lords, in their attempt to become digital money lords, may very well burn their fingers. Indeed, trying to control the use of money goes against the most fundamental function of money as a medium of exchange. If fiat money cannot be used to operate many exchanges, another medium must be discovered and used. Thus, the war on cash is a formidable opportunity for alternative currencies which could put a severe check on the central banks’ folly. In India, where the war on cash has hit badly the poor and small businesses, the sector that got a big boost was that of bitcoin and digital wallet. It is thus possible that the unintended consequence of the war on cash will be to weaken central banking by propping up competing currencies. If this happens, the second irony of history will be that the hard money Jacksonians were right and that the war on cash is indeed the first step toward sound money.

The Best of Louis Rouanet

Previous article by Louis Rouanet: Fiction and the Fed

The ‘Preeminent Statesman’ of Our Times? Bear Crying Wolf?