Why They Hate Rothbard

Given the foundational work Rothbard has done in developing and furthering libertarian theory, it is interesting to note how he is at best ignored and at worst despised by the broader libertarian movement.

What is more interesting is that Rothbard takes bullets from all sides – in many ways, the one thing many mainstream libertarians and libertine libertarians have in common is this disdain for Rothbard.

Rothbard first points to the mainstream libertarians.  He labels them, the “oxymoronic…Big Government Libertarians.”  In this group, he identifies, in addition to the Libertarian Party…

…a loose network of libertarian and free-market think-tanks, national ones that include lobbying groups, who gravitate inside the Beltway, and state or regional think-tanks, who necessarily remain in the heartland in body if not alas in spirit…

He additionally mentions legal groups, magazines, hard-money newsletters, and so on.  What do all of these Big Government Libertarian institutions have in common?  They have… 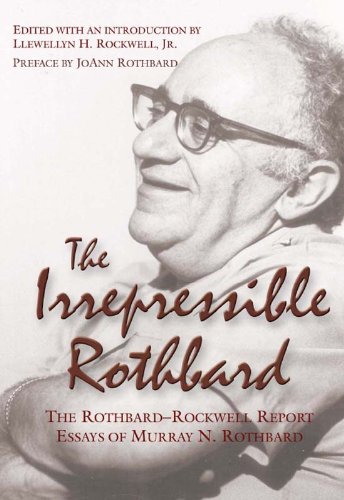 …in the last few years, moved at remarkable speed to abandon any shred of their original principles: devotion to minimizing government or defending the rights of private property.

Instead, these groups want to make government more efficient – as if efficiency in the production of “bads” is a good thing.  These Big Government Libertarians crave respectability in and the social acceptance of official Washington.

But there is a lot more at work here.  At bottom is the point which many of us had to learn painfully over the years: there can be no genuine separation between formal political ideology and cultural views and attitudes.

The libertarian political must equal libertine advocacy and acceptance.  Rothbard identifies a strong hatred of the right wing, coming from “a broader and even more intense hatred of Christianity….”

He identifies a deep-seated “egalitarianism” in this movement: “Scratch an egalitarian and you will inevitably find a statist.”  Instead of property rights, each individual “has ‘rights’ that must not be subject to curtailment by any form of ‘discrimination.’”

This despite the fact that “discrimination” is inherent in any meaningful definition of property rights.

And so, flying in the face of their former supposed devotion to the absolute rights of private property, the libertarian movement has embraced every phony and left-wing “right” that has been manufactured in recent decades.

The alphabet soup of all-invented-gender rights comes to mind.

…“civil rights” has been embraced without question, completely overriding the genuine rights of private property.

As an example of one who embraces this libertine, civil rights philosophy, Rothbard writes of a “favored” presidential candidate in 1996: Massachusetts Republican Governor William Weld, driven by his devotion to “gay rights.”

Yes, that William Weld.  Support gay rights and Hillary Clinton for president and you qualify to run on the LP ticket in 2016.

An important plank in this social tolerance is an insistence that “open borders” is a human right and a position that must be held by every proper libertarian.  Anyone who dares deviate from the position of “open borders” is “automatically and hysterically denounced as racist, fascist, sexist, heterosexist, xenophobic, and the rest of the panoply of smear terms that lie close at hand.”

And this has apparently become the unpardonable sin, blaspheming against the holy spirit of mainstream, libertine libertarianism.

The elite have found fellow-travelers in the libertine and Big Government Libertarians, respectively.

And this is why they hate Rothbard.