Is the Moral Life of a Christian Compatible with the Military Life?

This book is part of Oxford’s Studies in Theological Ethics, a series with six other titles. The author is Professor of Moral Theology and Ethics at the Catholic University of America.

I fully intended to read and write a review of this book, especially since the first of three “central claims” listed on the first page that the author says he makes in the book is “The moral life of a Christian is compatible with the military life.” However, I quickly became disillusioned when I noticed that the book’s index had no entries for Christ, Jesus Christ, Christian, Christianity, religion, morality, the Gospel, the Bible, or Scripture. Nevertheless, I went on to read the book’s introduction, its four chapters (each of which are nicely divided into between three and six sections), and all of the book’s 424 footnotes. I saw many references to Augustine and Aquinas and modern authors on just war theory, but only five Scripture references or quotes—and three of them were in the context of Augustine’s thought. The author himself only quotes two verses of Scripture—and they are from the Old Testament. After reading Politics, Justice, and War, I cannot but conclude that it is simply yet another book on just war theory, similar to the thirty-five others I have on one of my bookshelves.

All is not lost, however.

First, what does the New Testament say about the moral life of a Christian? 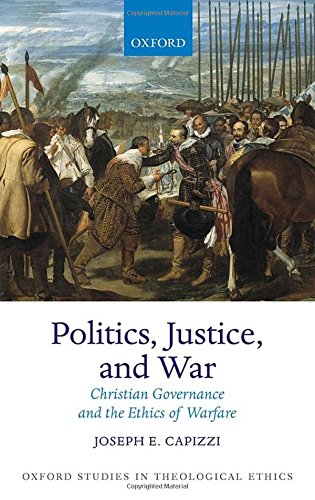 Christianity is the epitome of non-violence, non-aggression, and non-retaliation.

Second, what are the characteristics of military life?

Bombing countries that are no threat to the United States.

Mutilating the dead bodies of the “enemy.”

Garrisoning the planet with bases.

Heavy use of profanity.

Neglect of family to go on long deployments.

Desecrating the dead bodies of the “enemy.”

Engaging in offense instead of defense.

Killing civilians and dismissing it as collateral damage.

Killing foreigners who were no threat to the United States.

Going to countries where the U.S. military has no business going.

Maiming foreigners who were no threat to the United States.

Urinating on the dead bodies of the “enemy.”

Policing the world whether other countries like it or not.

Intervening in the affairs of other countries.

Fighting wars that are not constitutionally declared.

Willful ignorance of the history of U.S. military interventions.

Blind obedience to the state.

Carrying out a reckless, aggressive, and evil U.S. foreign policy.

Helping to create terrorists because of U.S. military actions.

Supporting a network of brothels around the world.