Annals of the Stupid Party

Most Congressional Republicans want to go to war with the world.

Most Congressional Republicans like unconstitutional federal power and bloated bureaucracy.

That shouldn’t surprise anyone.

The late Sam Francis labeled the Republican Party the “Stupid Party” for a reason. But perhaps the label should be on the voters who keep sending them to Washington. They lie and we punch their ticket to D.C.

Clyde Wilson has been sounding the alarm about these faux conservatives for nearly five decades. As he writes in the Forward to his recent Annals of the Stupid Party: Republicans Before Trump (published just before the November election), “the greatest obstacle to meaningful change will be the Republican Party.” It always has been. 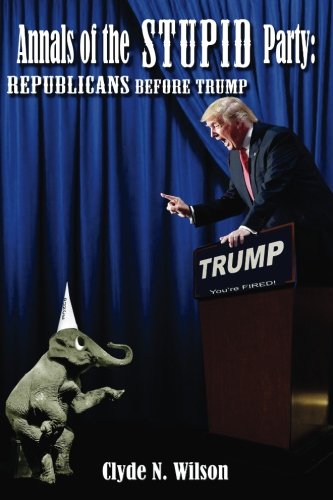 Wilson romps through the history of the GOP in this splendid collection of essays. From Lincoln to George Quincy Bush to the current establishment crop in Washington, including Mike Pence, he explains why Americans should never trust a Republican. Trump is different to a degree, but he is an outlier and the inertia of the “Stupid Party” is already working against him.

Most Americans forget or we never taught that the Republicans were from their inception in 1854 the party of revolution, be it economic, political, or social.

From the income tax to the loss of real federalism, to the establishment of state capitalism and central banking, to heavy-handed regulation and social engineering, to activist federal judges, the Republicans have their fingerprints all over every unconstitutional and immoral act.

The national government is their creation. The Democrats simply adopted their playbook in the early twentieth century. Think Teddy Roosevelt’s “national greatness conservatism” or Lincoln’s misuse of the meaning of the Declaration of Independence. They have crafted a civic religion on the ruins of what actually made America great. It wasn’t banks, bombs, and bureaucracy.

Wilson explains that while many Americans sat on the sidelines during the Quincy Bush years, content that an “R” was in office, the central government expanded its power exponentially. Bush, in fact, made Clinton look great. At least he was willing to accept fiscal if not personal responsibility.

It did not improve while Obama organized America. The opposition was easy when it was largely symbolic, but as the American public is quickly discovering, “Republican principles” don’t go beyond passing meaningless legislation that would never make it past Obama’s desk. Trump would have signed much of it. Now, crickets.

Passing actual legislation that critics would label “conservative” or “limited government” has never been their M.O. Wilson accurately calls it the “Republican Charade.”

And even Wilson’s beloved Dixie has been sucked into the Republican maelstrom. For example, “Senator No,” Jesse Helms, became a “National Republican” and Wilson writes “never met a Republican president or a Republican policy he doesn’t like.” Washington can be intoxicating which is why principled men either burn out, are marginalized, or are co-opted. It’s easier to be with them than against them.

Wilson believes Trump may be different. If his recent press conference and quick action on a number of bedrock issues is any indication, he may be correct. But then again, Trump is not your typical Republican.

Perhaps the only way to truly make America great is to rid the American consciousness of the myth of St. Abraham. That would help undermine the vice grip the “Stupid Party” has on American “conservative thought.”

This would involve a systematic overhaul of American “conservative” institutions, among them large print media and “conservative” think tanks. Neocons are being exposed as frauds. That trend needs to continue.

Wilson’s solution to the problem? Have Trump tell the Republicans, “You’re Fired!” As he asks, rhetorically, “Why save the stupid party?”

Readers of this insightful book will be left wondering the same thing.

More Reds Under Our Beds Guaranteed To Infuriate the Establishment