CNN reports that a man in Berlin used a truck to plow through a group of people at a Christmas market, killing 9 and injuring 50 more. The tractor-trailer appeared to deliberately ram through several stalls at what is estimated to be 40 miles per hour; German authorities are treating the incident, at present, as a terror event.

The attack appears to parallel the cargo truck killing of 86 people and the wounding of 434 others in Nice, France during a fireworks display on a national holiday. On a smaller scale, a Somali student at Ohio State University recently ran down a number of people before leaving his car and stabbing several others with a large knife. A pattern seems to be emerging where a vehicle is used to cause casualties in public spaces.

This pattern is not occurring by accident. The English-language ISIS magazine “Rumiyah” has recently called for vehicle attacks on the West. An article that discussed which vehicles are best to do the most damage was titled “Just Terror Tactics”. Al-Qaeda has made calls for similar attacks, calling pickup trucks “the ultimate mowing machine”.

The article was quoted in the Business Insider: “Though being an essential part of modern life, very few actually comprehend the deadly and destructive capability of the motor vehicle and its capacity of reaping large numbers of casualties if used in a premeditated manner…Vehicles are like knives, as they are extremely easy to acquire…”

Ordinarily, terror attacks are associated with guns, but these items are difficult to come by in most countries. Bombs, another preferred terrorist weapon, require expertise to assemble safely. Owning or renting a vehicle, however, is much more common and requires little skill to operate. Trucks and cars can cause mass casualties if wielded as a weapon; obtaining one elicits no suspicion.

Therefore, would-be terrorists now have a new blueprint for causing mayhem among an unsuspecting public. There are few who pay much attention to traffic unless they’re in a vehicle themselves or crossing the street. The speed at which a vehicle can accelerate and turn into a crowd leaves little time for reaction. Hence, the “success” rate of this type of terror event may surpass even a gunman’s ability to cause deaths and injuries.

The situationally aware person is always at a state of “Yellow Alert” when in crowded public venues. By that, I mean a state of relaxed but vigilant observation of what is happening around him or her. When an action or behavior occurs that doesn’t match the surroundings and situation, it’s an anomaly.

When a vehicle moves erratically or leaves the normal pattern of traffic, it’s an anomaly that requires rapid action. Mentally noting routes of escape whenever you’re in a crowd will give you the best chance of getting out of the way. Just as knowing the location of exits in a mall or theatre is good policy, a heightened awareness is now important at any outdoor event or popular public area near roadways.

For vehicular terrorists, the target will be crowds of people near the street. Their objective is mass casualties, and those pedestrians nearest the curb will bear the brunt of the attack. Consider walking on the fringe of a crowd away from the road to give yourself the most options. In the center, the masses, not your own good judgment, will dictate your movement. Take a walk along Times Square and you’ll see what I mean. 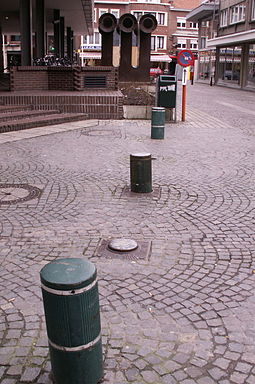 Municipalities can protect their citizens by constructing barriers known as “bollards” which would stop vehicles from entering pedestrian areas. These can be seen outside many government buildings and airport terminals. Expanding their use to areas that attract crowds would be an important consideration for the future.

I’ll admit that the likelihood you’ll be in the path of a terrorist using a vehicle, or any other weapon, is very small. Panic isn’t the answer, but these are troubled times; the more situationally aware you are, the safer you’ll be.