Why a classic Philip Rieff essay on the Goldwater era resonates in the year of Trump.

The current issue of Society begins with a review by Philip Rieff, written in 1964, of the sociological concept of “Ressentiment.” The concept here discussed by Rieff, then a professor of sociology at the University of Pennsylvania, goes back to the early 19th century, when the Danish theologian Søren Kierkegaard (1813–1855) introduced it, though not as a sociological term. Kierkegaard spoke about Ressentiment as a spiritual state that the man of faith must work to overcome.

Later, Nietzsche, perhaps most conspicuously in his Genealogy of Morals (1887), reintroduced Ressentiment in regard to ethical and religious matters. Nietzsche employed this concept in explaining the disposition of the world-denying creators and practitioners of slave morality. Those who shunned a vigorous, adventurous existence and resented those who affirmed their will to life and power saddled us with their religious precepts. Mortification of the body, the obliteration of sexual distinctions, and hatred of beauty were all characteristic of the Ressentiment-bearing opponents of the natural aristocrat.

Ressentiment made another important literary appearance in 1912, in a book of that name by the German ethical philosopher Max Scheler (1874–1928), who took the term from Nietzsche. In Scheler’s formulation, Ressentiment is a regrettable characteristic that distorts moral judgment. It causes those afflicted with it to ascribe ignoble motives to others without sufficient proof. Scheler was perhaps best known for his construction of a hierarchy of moral values, in which a sharp distinction is made between higher and lower human motives. Among the qualities that Scheler believed kept us from becoming more fully human in the best sense was resentment toward others who we assume enjoy unfair advantages over us. This assumption, according to Scheler, is more often than not driven by jealousy rather than an objective assessment of the situation. Note that Scheler does not deny that injustice may 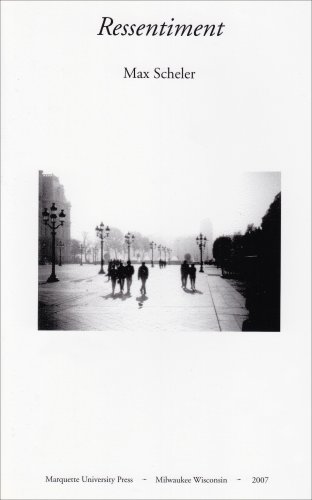 exist in the world. But he contends that Ressentiment or envy is a permanent aspect of the human personality and gets in the way of dealing fairly and humanely with others. In 1964 Rieff reviewed a translation of Scheler’s work that had come out three years earlier, and his remarks appeared first in The American Journal of Sociology. Here Rieff tells us that Ressentiment “should be required reading for all those trained in sociological theory” and that there are parallels in thinking between Scheler and Rieff’s favorite thinker, Freud. Both were concerned with the need felt by some to punish others, and they investigated the motives that made people “feel manifestly justified in righteous and highly ‘moral’ conduct.”

But Scheler, according to Rieff, “worked explicitly and knowingly in the Nietzschean tradition,” and this caused him to make certain “aristocratic assumptions” that didn’t please the reviewer. Rieff was a declared man of the left and the former husband of feminist Susan Sontag. He balked at Scheler’s implied belief, which apparently came from Nietzsche, that “rancor and envy run parallel to the social structure and to the playing out of certain roles in an egalitarian society precisely because that society is suffering the poisons introduced by the egalitarian principle.” Rieff maintained that “aristocratic assumptions” run so deep in Scheler’s work that they cannot be separated from the theory. And he most emphatically rejected the idea that “a theory in sociology can be divorced from its polemical foundation and remain standing.”

That said, Rieff argued that there are aspects of Scheler’s anti-egalitarian theory that could be used to further “sociological investigation.” The example he cited is the “political phenomenon of a rancorous right wing.” This could be studied by combining “a conception explored by Scheler” with the “egalitarian principle.” Armed with his own approach to Scheler, Rieff went after “the rancorous followers of Senator Goldwater,” who “detest not only the figure of the President with high social and cultural style, who appears to have been above them, so to say, but also the massed figures below them, the protesting Negroes.”

What Mises Would SayLibertarianism and the Right