I May Never Vote Again

Every now and then you read one of those books that you know will stick with you for years to come. It will shape and form your thoughts. There will be a lasting impression that will aid in your future decision-making and perceptions. Unexpectedly, for me, that is “No Treason”.

If you love Rousseau’s “Social Contract” you will hate this book; for they are emphatically opposed.

Spooner, a rabid abolitionist, affixes his argument on the crux that not allowing the South to uncouple itself peacefully from the Union, defines all that a voluntary government and Constitution ought to be and have been. For if one cannot leave the union, it is no union at all, but slavery in and of itself.

The remainder of the book is not focused on Civil War issues. It is an interesting assessment that the Constitution is not a legitimate contract, for no populous has “signed” it or agreed to its terms. The People are offered two choices, the ballot (which is highly rigged) or the bullet. It makes men vote for themselves and against others. One man votes to take things from his neighbors. The other man votes in defense of his property.

Ultimately, money is power. The first thing governments do when their authority is denied is hired soldiers to subdue those who refuse to pay. He argues that “governments” don’t really exist. At least not in the that we believe because real governments are only made up of a few people.

Of course, I had plenty of questions throughout. If he believes direct authorization from citizens is better than representatives, then I’m not sure how a nation would proceed with urgent decisions in a timely manner. He speaks against secret ballots, but at the same time, Unions have proven that with open ballots, voters face intimidation and physical threat. How would/does an entire nation “sign” a contract; ie- Constitution? How would a Constitution become legitimate?

Chapter 8 is by far the most thought-provoking in the book. Spooner details the dark secrets of bankers controlling governments. He specifically calls out the Rothschilds; this is 140 years ago and there is still talk of the Rothschilds owning the world. He explains the mechanics of money-lending to nations. Rulers are ultimately held accountable to the bankers. Rulers can ascend or be deposed at the behest of the bankers. If a ruler loses credit and the investment does not bring forth the interest guaranteed; the ruler is handed over to his own people as a beggar is dismissed. In return of good investments, certain industries are allowed monopolies and unequal taxation. The burden falls on the poor and the unconnected. 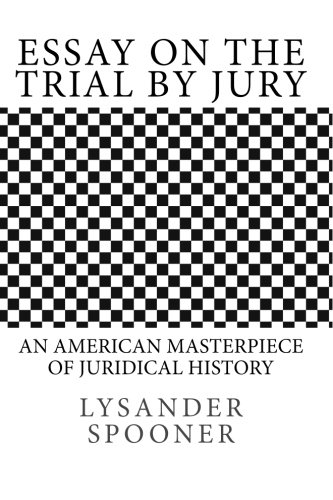 Representatives are merely tools. There is no true justice. Only if the investment proves to pay off is justice then used as propaganda. Spooner explains that the North had no intentions in freeing the slaves. Since the South wouldn’t bend to their market manipulations, the North, in turn, used the slaves against them. At the end of the day, “there was no difference of principle- but only of degree- between the slavery they boast they have abolished, and the slavery they were fighting to preserve; for all restraints upon men’s liberty, not necessary for the simple maintenance of justice, are of the nature of slavery, and differ from each other only in degree.”

It is a fantastically thought-provoking read. Disclaimer- if anyone can possibly pervert Spooner’s views on the Civil War into being “racist” and in support of slavery; there is no word for them but dense.