Review of Ted Lewis, ed., Electing Not to Vote: Christian Reflections on Reasons for Not Voting (Cascade Books, 2008), xiii + 126 pgs.

Although the book was published in 2008, I did not find out about it until after the presidential election of 2012. After obtaining the book, I put it on my stack of books to read and possibly review. Since I never got around to reviewing it, the book eventually made its way to the Christianity and Politics/Economics section of my library, where it sat on a shelf until about a month ago. While looking for a different book, I came across Electing Not to Vote, read it, and determined to write a review of it by Election Day.

Electing Not to Vote is a small work with nine chapters, each by a different author: 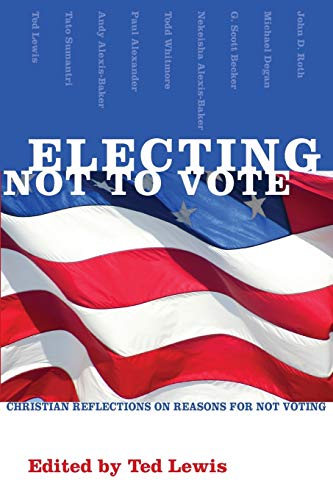 The author of the last chapter, Ted Lewis, also wrote the introduction and serves as the book’s editor. He is an acquisitions editor at Wipf and Stock Publishers, and writes articles and book reviews for Mennonite periodicals. But don’t make the mistake of thinking that the book is written solely from a Mennonite perspective. The authors, none of whom are household names, belong to Mennonite, Baptist, Catholic, Pentecostal faith traditions. One of the Mennonite authors is a black woman originally from Trinidad. There are brief bios of the contributors at the end of the book. The book also contains footnotes and a bibliography.

Electing Not to Vote is not designed as a philosophical treatise against voting in general, although it does contain things in it that could be considered as such. Its essays “generally focus on American presidential elections,” and especially the election of 2008 that gave us Obama. The aim of the book “is to promote new thinking, new questions, and new dialogue where such thinking, questioning, and dialogue have not yet happened.” Although Obama is not in the election of 2016, the book should not be considered dated and irrelevant.

In the book’s introduction, the editor gives a one-paragraph synopsis of the contents of each chapter so I won’t provide my own here. What I want to do is mention some things about and from each chapter.

In chapter one, the author laments that “political involvement has now become a Christian imperative.” He suggests “five reasons that Christians might conscientiously abstain from voting.” He reasons that if he could not in good conscience serve as the U.S. president and have to authorize the use of violence, then “as a follower of Christ”: “How can I in good conscience cast my support for someone else to do that in my stead?” Rather than make “a dubious calculation about the lesser of two evils in this regard, perhaps we should consider refraining from supporting either option.” The author believes that “abstaining from presidential elections could signal to our children and to the global church that our first loyalty is to the worldwide fellowship of Christian believers, not to the nation-state.”

In chapter two, the author refers to John Howard Yoder’s argument that “voting is at best the weakest form of political action, anti-Christian mythologies surround the ritual, and voting does not change the basic fact that some people still rule over others.” Elections reinforce the “state-as-savior” mythology. The author argues that “historically false and anti-Christian mythologies saturate American elections.”

In chapter three, the author acknowledges that as a black, a woman, and a naturalized citizen, she is offending those in these categories who “risked life and limb to secure their vote in the United States.” But she no longer accepts that “voting is an effective way for people to exercise their political voices.” Ballots have only “room to affirm prepackaged candidates whose vague plans have been publicized via sound bites, by negative campaign ads, in speeches, and in televised debates.”

In chapter four, the author finds troubling “the large number” of evangelicals “who have entered forcefully and vocally into the political fray with a view toward imposing an ostensibly Christian morality upon a divided American public.” He believes that “participation in the power struggles of governmental politics cannot but betray the cruciform character of Jesus’s ministry.”

In chapter five, the author expresses his opinion that Democrats and Republicans are “really more similar than they are distinct” and “two sides of the same coin—a coin that Jesus called ‘mammon.’” Neither party “is really interested in reform or fundamental change.” He believes that Christians are called to submit to government, but not “to participate in it because they may be required to use violence to defend it.” The author holds that the kingdom of the world is the realm of Satan. Therefore, “To vote or to participate in government identifies one with ‘this world,’ not with Jesus’s kingdom.”

In chapter six, the author presents the Catholic case for not voting. Instead of asking which candidate is the lesser of two evils, he argues that Catholics should ask: “Is the difference between Catholic teaching and the candidate nearest to it greater than the distance between the candidates?” He concludes that “almost without exception the gap between the two candidates is less than the distance of either candidate from Catholic teaching.”

In chapter seven, the author presents the Pentecostal case for not voting. He reminds us that Scripture “never tells us to choose the lesser of two evils.” Reading early Pentecostals inspired him because he realized that “nationalism and the body of God form a lethal combination.”

In chapter eight, the author maintains that “we are Christians first and foremost, members of the body of Christ, gathered to be the people and place where Jesus is Lord and Savior.”

In chapter nine, the author states his thesis as: “Voting for political leaders, whether we think about it or not, establishes bonds between people and government in similar ways that religion establishes bonds between people and deities.” He posits that “the very act of voting itself is problematic in the same way that participating in warfare or in retributive punishments would be problematic for Christians.”

Although Electing Not to Vote is not written from a traditional conservative, evangelical perspective (the most vocal Christian group of voters), it is a good staring place for Christians of every stripe who have never been introduced to the Christian non-voting perspective.

This Is Going To End Badly Even If Trump Loses