Review of John L. Smith “Even a Street Dog”

Las Vegas is said to be constantly reinventing itself. What was once “Sin City” has gone through it’s Rat Pack days, it’s family friendly days, it’s “what happens here stays here” phase, and now it’s “pay for parking” phase.

Arriving at the Mirage to spend hundreds on dinner and more hundreds watching “Love” I was made speechless when the valet parker, no doubt seeing my Nevada license plates, sheepishly told me, “you know we now charge for valet.”  I asked how much. “Between $13 and $18.” With a car full of out-of-town guests, I could only reply, “okay.” Later I learned tips are down 70% in the valet and there’s union talk among the parkers.

Today’s Vegas where corporate titans have their hand in your pocket at every turn is not the Vegas John L. Smith writes about in “Even A Street Dog: Las Vegas Stories.”  It wasn’t so long ago that the hotels would give away the food and drink, figuring the casino floor held a paddle for every butt.

Smith wrote a general interest column four or five days a week for 30 years.  Short vignettes about eccentric Vegas characters and places are his stock in trade. 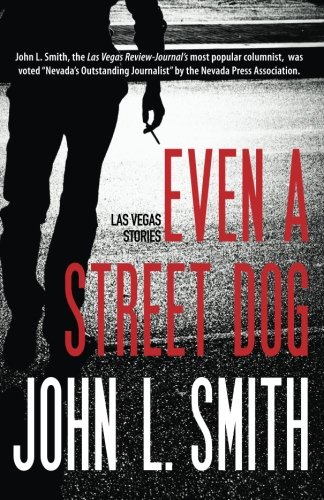 Smith was the Las Vegas Review Journal’s most popular writer until he quit this year upon receiving the ultimatum from the paper’s new management prohibiting him from writing about the paper’s new owner Sheldon Adelson or Adelson’s neighbor on the Strip, Steve Wynn.

A couple months later, Smith was inducted into the Nevada Newspaper Hall of Fame.

In protest, the paper’s new publisher, Craig Moon, resigned from the board of directors of the Nevada Press Association in what ex- RJ editor Thomas Mitchell described as “one of the pettiest, petulant and pusillanimous acts of perfidy in the annals of alleged journalism.”

Smith writes much of “Street Dog” in the first person of Jasper Lamar Crabbe and tells what I would guess are a few true stories with the names changed to protect the innocent and, of course, the guilty.  For instance, everyone will know who Chapter Two’s Billy Flowers, MVP is.  Long time Vegans will recognize Double D.

However, most of Smith’s subjects are far less glamorous. Bust outs and burnouts, dreamers, schemers, losers, and flashers, the author makes us fall in love with each and every one.  He takes us inside bars, Philly Pub, the Rice Paddy, and Four Kegs that while Vegas locals institutions haven’t all survived the city’s homogenizing saloon consolidation that has resulted in hundreds of sterile 15 machine watering holes, one no different than the next.

Crabbe loves corner booths with enough light to read his paper and philosophize. “We’re all metaphors when you stop and think about it. I don’t mind that so much; I only wish I knew the meaning of my metaphor.”  Don’t we all.

Smith himself is not elderly but is an old, cynical soul, just as the city, he writes about. Vegas will take your weaknesses and strangle you with it. Vices are available 24 hours a day, 365 days a year. It’s survival of the disciplined. So, while 6,000 people a month are moving here, I have news for them, the glory years have passed, but the pitfalls remain.

Dealer’s sore feet and arthritic hands are paid paltry tips by tight-fisted middle-class players. Tips cruelly eroded by inflation, forcing the town’s working class to work into their golden years in a smoky fog at least a couple shifts a week as Smith’s Big Bill does. Bill dreams of the sweet days when the mob ran the town, “tokes (tips) were fat and the IRS hadn’t sunk its fangs into the action.”

It was really swing shift that did Big Bill in. Nothing nefarious, just plain old fashioned boozing lost him his wife, family, and house. Meanwhile, the Hat hates playing it straight working in a sportsbook taking suckers’ bets. He’d rather be a shylock on the outside. He admits to having a Jones for betting horses and like many in Vegas “Money talks to me when it’s in my pocket, and it doesn’t shut up until it’s in someone else’s. As he says, “if you play, sooner or later you’re going to pay.”

Crabbe was never a fan of The Professor. He didn’t care to hear the baby-faced academic’s constant theorizing. But he runs into him at the hole-in-the-wall Pogo’s and the Professor stopped playing video poker long enough to say he was leaving town. “Las Vegas has changed forever, not for the better I fear.”  Longtimers know he’s right. The Professor complains that Vegas is a cultural wasteland that has become too expensive. “Economics wins out over aesthetics every time,” the Professor explains. “But now the cost of living in Las Vegas is too great.”

NVFisherman responded to the news that MGM would start charging for parking with, “This will turn out to a big mistake for [Jim] Murren and his young MBAs. The boys from Chicago and Detroit would never have charged for valet parking.” The mob was smart enough to give away the small stuff because, in the long run, the house never loses. Come to think of it, the valet was empty when I pulled up.

Ironically, Smith’s sad tales of survival are set in what will turn out to be the town’s heyday.   Smith’s Vegas was an intriguing place worth pondering. Read about it and enjoy what it was, but know the city’s corporate and government titans are turning Vegas into just another expensive southwest sea of stucco and tile with high taxes and less hope.

Previous article by Douglas French: Was Nevada Once Slightly Libertarian?