The Alternative to Presidential Politics

In his new book Nullification: Reclaiming Consent of the Governed, Clyde Wilson pinpoints the folly and futility of “presidential politics” – of hoping against hope that some Great Savior will somehow restore American liberty.  Only those who are almost completely ignorant of American history could be fooled by such a farce.  Unfortunately, that seems to include most Americans.

Early Americans were never so naïve as to believe that national politicians could preserve their freedom; that was their job.  They are the ones who, acting through their state-level political societies, created and gave authority to the Constitution.  The government was to act as their agent and was delegated by them only a few specific powers.  Moreover, the government itself could never be the judge of its own powers, for that would lead to “nothing less than a government of unlimited power, a tyranny,” writes Wilson.  Of course, that is what Americans have now lived under for generations with the “black-robed deities” of the “supreme” court announcing for all of us what freedoms we shall have. 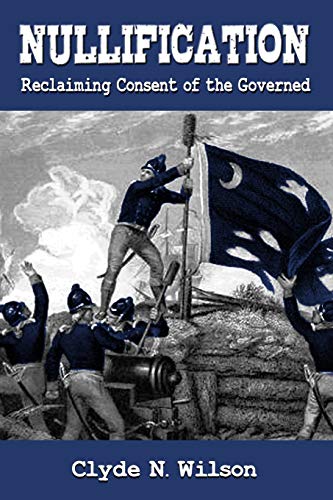 A monopoly or “national” government was always understood to be the greatest threat to liberty by such American statesmen as Thomas Jefferson, author of the Kentucky Resolution of 1798 that enunciated the concept of nullification.  (He was invited to author the Resolution by friends in the Kentucky legislature).  It was a response to the first totalitarian power grab by the New England, leftist establishment led by John Adams who enforced the Sedition Act, an abominable law that outlawed free political speech in America.  “Resolved, That the several States composing the United States of America, are not united on the principle of unlimited submission to their General Government,” Jefferson wrote in the Resolve. “[A]nd that whensoever the General Government assumes undelegated powers, its acts are unauthoritative, void, and of no force.”  Kentucky would not allow the enforcement of the unconstitutional Sedition Act within its borders.  James Madison authored the Virginia Resolution of 1798 that said the same thing.  If “consent of the governed” were to have any real meaning, that consent would have to be enforced through such political vehicles as nullification and secession.

The leftist New England establishment first invented the lie that Jefferson was not the author of the Kentucky Resolve – until the great man’s grandson produced a copy of it in his grandfather’s own handwriting.  They then invented a second lie that Jefferson was only defending free speech and not states’ rights. Jefferson himself denied this all throughout his life, Wilson points out, by insisting that in the American system of government, states’ rights and liberty could not be separated.  If Americans were to have a constitution that protected their freedoms, they would have to enforce it through political communities organized at the state and local level.

The central government itself could never be trusted – especially through its “supreme” court — to do so.   Jefferson understood that if the day ever came that five government lawyers with lifetime tenure would decide what everyone’s liberties were to be, then the American Revolution would have failed and Americans would live under a tyranny.  That day arrived in 1865, when the U.S. government finally destroyed federalism and states’ rights and consolidated political power – including the power of constitutional interpretation – in Washington, D.C.

Once empowered by a monopolistic, consolidated, centralized government used to enrich its operators, there would be no logic that could overturn it, said Jefferson, for “you might as well reason and argue with the marble columns” in the Capitol, he said in a letter.  He was well aware during his lifetime that the New England “consolidators” wanted a highly centralized government that would subsidize their business enterprises with cheap credit through a bank run by politicians; protect them from international completion with protectionist tariffs, and lavish canal- and road-building corporations with tax dollars.  Jefferson’s nemesis Alexander Hamilton, the intellectual leader (of sorts) of the New England/New York/Philadelphia leftist establishment, gave this British-style mercantilistic corruption scheme the Orwellian label of “The American System.”

As Wilson points out, Hamilton praised the American ideals of federalism and states’ rights in The Federalist Papers, and then spent the rest of his life doing everything he could to undermine and destroy those ideals.  This included inventing a false history of the founding in which he claimed that the citizens of the states, who ratified the Constitution in state political conventions, were never sovereign, and that Americans’ real “original intent” was to create a highly centralized, monopolistic government like the one in England.  Hamilton’s theory, Wilson correctly points out, “always rested upon coercion, chutzpah, and lies.”  It was also the theory of the American founding that was embraced by Abraham Lincoln who used it to “justify” waging war on his own fellow citizens, killing them off by the hundreds of thousands with the self-proclaimed objective of “saving the union.”

One of the sillier arguments fabricated against true federalism, which includes the rights of nullification and secession, is the slogan that “states don’t have rights, people do!”  Duh.  As Wilson points out, it was John Taylor of Caroline who actually first said this in the context of explaining the Jeffersonian dictum that “States are instruments by which the people may assert their rights against usurpers and oppressors” (emphasis added).  At least they were in Taylor’s day.  Today they are appendages of Washington, D.C.

In a chapter on “The Real Constitution” Wilson states the obvious fact that the fabled “system of checks and balances” has been a complete failure in limiting governmental powers to those delegated to it by the Constitution.  In reality, all three branches of the federal government work in tandem to limit our freedoms.  It is “we the people” who are limited and controlled, thanks to the state’s judicial monopoly of constitutional interpretation.  “The real Constitution did not belong to lawyers, who obfuscate for a living,” writes Wilson, who points out that most of the participants at the constitutional convention were not lawyers, unlike today’s political class.  The people do not need lawyers to tell them what “THEIR” constitution says, Wilson proclaims.

The fatal mistake of conservatives and libertarians who call themselves “constitutionalists” is their belief that the federal government can somehow be persuaded to begin enforcing the Constitution and thereby limiting its own power, prestige, remuneration, and perks.  “The peoples of the states have not delegated to federal judges the power to decide what their rights are. This is a power they have reserved to themselves.”

By “the people” Wilson, like Jefferson, does not mean a majority of the electorate.  “By people, do we mean that if a million Chinese wade ashore in California and outvote everybody else, then they are sovereign?  I think not.”  If “consent of the governed” has any meaning at all, writes Wilson, then it means what it was always intended to mean:  the people of the free, independent, and sovereign states.  “The right to self-government rests on the right to withdraw consent from an oppressive government,” says Wilson, and in the real American system that has historically been achieved by the people acting through their state-level political communities.  It is how they decided to fight the Revolution; it is how the Revolution ended, with King George III signing a peace treaty with each individual state; it is how the Constitution was ratified; and it is how the Constitution can be amended.  This is why, in all the founding documents, “United States” is always in the plural, signifying that the free and independent states are united.  It never meant some Leviathan called “the United States government.”  That was the lying fabrication of Lincoln in his Gettysburg address in which he invented the strange notion that the founders created a “new nation” instead of a confederacy of free and independent states, as is clearly stated in the Declaration of Independence, among other places.

Real federalism or states’ rights is all but nonexistent today, says Wilson, because “it presented the most powerful obstacle to the consolidation of irresponsible power – that consolidation which our forefathers decried as the greatest single threat to liberty.  For that reason, states’ rights had to be covered under a blanket of lies and usurpations by those who thought they could rule us better than we can rule ourselves.”  After the “Civil War,” writes Wilson, “the American idea of consent of the governed was replaced by the European idea of obedience.”

The destruction of the Jeffersonian, states’ rights tradition, with the elimination of nullification and secession as the essential ingredients of the consent of the governed, allowed the rotten Hamiltonian system of government by crony capitalists, for crony capitalists, and of crony capitalists to become cemented into place.  This is what Lincoln and the Republican Party of his day meant when they said they were “saving the union,” Wilson observes.  It was NOT the voluntary union of the states they wanted to preserve; they utterly destroyed that and replaced it with a Soviet-style, compulsory union held together by violence, mass murder, mayhem, and plunder.  Their “union” was a large, centralized government that would dispense corporate welfare and protect the party’s corporate political supporters from international competition while showering them with cheap credit through a government-controlled banking system.  As Wilson himself explains:  “With the Lincoln revolution the Hamiltonian program triumphed. Indeed, that was the purpose of the Lincoln revolution. Thus today, all the politicians of both parties  rally around so that the taxpayers and posterity can reward the Banksters, Too Big to Jail, for their evil deeds” (emphasis added).

Preparing for Civil UnrestIs It OK To Like Trump for the Enemies He’s Made?