Is the U.S. Military the Lord’s Army?

Although the whole Vietnam War was a crime from start to finish, one particular event that occurred on March 16, 1968, has always been remembered as particularly horrific: the My Lai Massacre.

On that day U.S. soldiers from Charlie Company of the 1st Battalion, 20th Infantry Regiment, 11th Brigade, 23rd Infantry Division, visited the village of My Lai and killed everything that moved, including chickens, pigs, cows, water buffalo, and hundreds of unarmed civilians. As described by Nick Turse in his book Kill Anything That Moves: The Real American War in Vietnam:

They gunned down old men sitting in their homes and children as they ran for cover. They tossed grenades into homes without even bothering to look inside. An officer grabbed a woman by the hair and shot her point-blank with a pistol. A woman who came out of her home with a baby in her arms was shot down on the spot. As the tiny child hit the ground, another GI opened up on the infant with his M-16 automatic rifle. 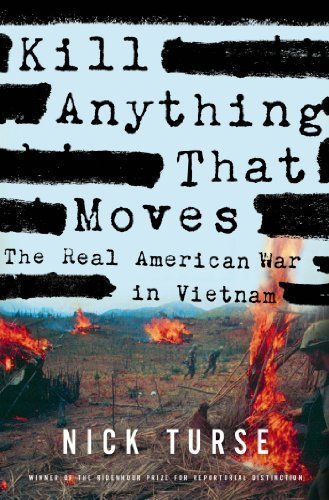 Over four hours, members of Charlie Company methodically slaughtered more than five hundred unarmed victims, killing some in ones and twos, others in small groups, and collecting many more in a drainage ditch that would become an infamous killing ground. They faced no opposition. They even took a quiet break to eat lunch in the midst of the carnage. Along the way, they also raped women and young girls, mutilated the dead, systematically burned homes, and fouled the area’s drinking water.

Defenders of the Vietnam War (has there been any war more undefendable than Vietnam?) maintain to this day that the My Lai massacre was just an isolated incident. In his book, Turse shows that the whole war was a series of My Lais. See my review of the book here.

Twenty-six soldiers who participated in the My Lai Massacre were charged with criminal offenses, but only Lieutenant William Calley Jr., a platoon leader, was found guilty. Here is the relevant Wikipedia summary:

During the four-month-long trial, Lieutenant Calley consistently claimed that he was following orders from his commanding officer, Captain Medina. Despite that, he was convicted and sentenced to life in prison on March 29, 1971, after being found guilty of premeditated murder of not fewer than twenty people. Two days later, President Richard Nixon made the controversial decision to have Calley released from armed custody at Fort Benning, Georgia, and put under house arrest pending appeal of his sentence. Calley’s conviction was upheld by the Army Court of Military Review in 1973 and by the U.S. Court of Military Appeals in 1974. In August 1971, Calley’s sentence was reduced by the Convening Authority from life to twenty years. Calley would eventually serve three and one-half years under house arrest at Fort Benning including three months in a disciplinary barracks in Fort Leavenworth, Kansas. In September 1974, he was paroled by the Secretary of the Army Howard Callaway.

Three other courts that had something to do with the Calley case are not mentioned here.

On September 25, 1974 (42 years ago, hence the timing of this article), Calley’s conviction was overturned by federal judge J. Robert Elliott of the U.S. District Court for the Middle District of Georgia. Judge Elliott considered three of Calley’s contentions “to be of constitutional dimension and, therefore, appropriate for consideration by this Court on review”:

(1) The contention that the Petitioner was denied a fair and impartial trial because of massive adverse pre-trial publicity.

(2) The contention that the Petitioner was denied his right of confrontation with witnesses and was denied compulsory process for obtaining witnesses in his favor.

(3) The contention that the Petitioner was denied due process by being convicted on charges and specifications which were improperly drawn and illegally used by the prosecution.

On September 10, 1975, the U.S. Court of Appeals for the Fifth Circuit in New Orleans, by a vote of 8 to 5, reversed Judge Elliott and reinstated the conviction. The Court stated that there was “no valid reason” for the federal courts to “interfere with the military judgment.”

On April 5, 1976, the U.S. Supreme Court refused to review the court-martial conviction of Lt. Calley, leaving the Appeals Court decision in effect.

Judge Elliott, who served on the bench for thirty-eight years, was the nation’s oldest federal district judge when he retired in 2000. He died in 2006. Something he said in his decision throwing out Calley’s conviction is more relevant today than it has ever been. Near the end of his decision, Judge Elliott pointed out that the slaughter of innocents is just part of war. But notice his first proof:

civilians as in military uniform.

It is also appropriate to keep in mind that war is war and it is not at all unusual for innocent civilians to be numbered among its victims. It has been so throughout recorded history. It was so when Joshua took Jericho in ancient Biblical times.

“And they utterly destroyed all that was in the city, both man and woman, young and old . . . with the edge of the sword.”

Now Joshua did not have charges brought against him for the slaughter of the civilian population of Jericho. But then “the Lord was with Joshua,” we are told.

“So the Lord was with Joshua; and his fame was noised throughout all the country.”

These are quotations from Joshua 6:21 and 6:27. The judge then remarked that the airmen who dropped the bombs on women and children in Germany and Japan during World War II “got medals and honorable discharges.”

But is the U.S. military the Lord’s army? Can we put the actions of U.S. pilots who dropped bombs on woman and children during World War II in the same category as those of Joshua? Can we justify the actions of U.S. soldiers in Vietnam, Iraq, and Afghanistan because of something that Joshua did in the Old Testament?

Of course not. Although Old Testament Christians may try to.

The U.S. military is not the Lord’s army. Never has been. Never will be.

The Lord brought the Jews “out of the land of Egypt by their armies” (Exodus 12:2). There are a number of things that the Lord’s army was and the U.S. military isn’t.

The Lord’s army was made up of Jews; the U.S. military contains mainly Christians.

The Lord’s army was part of his chosen nation; the U.S. military is part of a pagan nation.

The Lord’s army was divinely commanded to fight; the U.S. military is not.

The Lord’s army didn’t police the world; the U.S. military is the world’s policeman.

The Lord’s army had no women in it; the U.S. military is full of women.

The Lord’s army had no LGBTs in it; the U.S. military contains many and celebrates LGBT pride month in June of every year.

The Lord’s army killed only those whom it was supposed to; the U.S. military kills indiscriminately.

The Lord’s army trusted in God; the U.S. military trusts in its might.

The Lord’s army was limited to a certain time and place; the U.S. military builds bases all over the world and stations troops in over 150 countries.

As I have maintained in all of my articles on Christianity and war since the United States invaded Iraq:

Previous article by Laurence M. Vance: Another Reason To Keep Your Kids Out of the Military

Strife Within the War PartyWas Nevada Once Slightly Libertarian?