Conservatives Just Don’t Get It on the Drug War

One of the main things that conservatives just don’t get is the war on drugs. There are some exceptions, of course, but mainly just regarding marijuana. Few conservatives are willing to go on record as opposing lock, stock, and barrel the government’s war on drugs of every kind.

The latest conservative who just doesn’t get it is Phil Valentine, author of the recently published second edition of The Conservative’s Handbook (Cumberland House, 2016). Valentine is a nationally syndicated conservative radio talk show host. Writing in the book’s 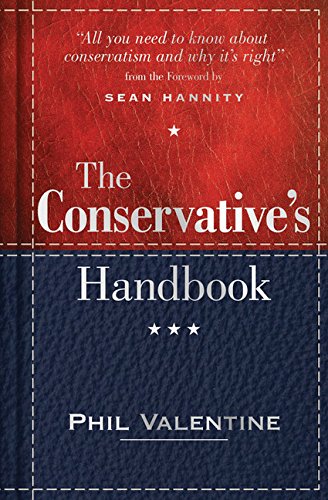 foreword, conservative icon Sean Hannity tells us that the book “is so insightful and so well researched that’s its impossible to read it and not gain a thorough understanding of conservatism.” Writing in the book’s introduction, the author states his work is “a conservative philosophy book” that “reconfirms conservatism.”

Valentine begins by saying that although “a number of conservatives have advocated legalizing drugs as a means of reducing the crime associated with them,” he disagrees. He not only doesn’t believe that “our war on drugs has been a dismal failure,” he maintains that we’re actually “winning the war on drugs.” Why? Because government surveys have shown a drop in reported drug use from 1979 to 2012. That’s his proof. But later in the chapter, Valentine informs us that “pot use is on the rise in the United States.” And the current epidemic of heroin overdoses in this country certainly began before The Conservative’s Handbook went to press.

millions of people who, otherwise, would never have touched them.” He claims that the “reason why drugs like cocaine, heroin, and meth should not be legalized is that they’re much more addictive than alcohol.” (He acknowledges that pot is the exception, but still wants a government war on pot.) Valentine must have missed the study by the prestigious British peer-reviewed journal the Lancet that found that alcohol was the most harmful drug overall, beating out heroin and crack cocaine.

Valentine insists that drug use “will only get worse with drug legalization.” But instead of telling us why, he launches into a discussion about illicit drug users being more likely than non-drug users to be arrested for larceny or theft. He also gives us statistics concerning the percentage of prison inmates who committed robbery or burglary to buy drugs. But aren’t these things proof that drug legalization will result in less crime—and not just because there would be no more arrests for drug crimes?

Valentine maintains that it is “probably not true” that “the price of illegal drugs would come down considerably if they were legalized.” He argues that the “illegal equivalent of anything is going to be cheaper” and uses as an example the fact that “cigarettes are cheaper on the black market than at the corner convenience store.” But then he acknowledges that this is due in part to high cigarette taxes.

Valentine’s solution to the drug problem in the United States is to “stiffen” penalties on both the supply and demand side. “Drug peddlers” need to be put away—for life. He wants a mandatory sentence of six months at hard labor “from sunrise to sundown” for the first offense of felony drug trafficking. A second offense would mean a mandatory life sentence even though armed robbery, rape, and manslaughter don’t even carry life sentences.

Valentine defense of the drug war is not only lame, it is deceitful. At the end of his chapter on how drug legalization will cripple America, he begins by pointing out what the federal government spends to fight the drug war every year (using figures from 2009 and not mentioning what the states spend), but then includes the societal cost of alcohol abuse in coming up with the cost of the damage caused by drugs.

Conservatives just don’t get that the war on drugs is a complete and total failure.

Conservatives just don’t get that people should be free to live their lives in any manner they chooses as long as their activities are peaceful and they don’t violate the personal or property rights of anyone else.

Conservatives just don’t get that everything bad that could be said regarding drug use could equally be said of tobacco and alcohol use.

Conservatives just don’t get that the financial and human costs of the war on drugs greatly exceed its supposed benefits.

Conservatives just don’t get that the Constitution nowhere gives the federal government the authority to have a DEA, classify drugs on a schedule, and fight a war on drugs.

Conservatives just don’t get that it is an illegitimate purpose of government to regulate, monitor, or restrict the consumption, therapeutic, medical, or recreational habits of Americans.

Conservatives just don’t get that private organizations and individuals, not government programs and bureaucrats, are the solution to any problems resulting from drug abuse.

Conservatives just don’t get that every crime needs a tangible victim with measurable damages.

Conservatives just don’t get that a free society has to include the right of people to take risks, practice bad habits, partake of addictive conduct, engage in self-destructive behavior, exercise poor judgment, live an unhealthy lifestyle, participate in immoral activities, commit vice, and undertake dangerous actions.

Previous article by Laurence M. Vance: Enemies of the Constitution

British Spies Tricked Us into WW2Time To Recycle the State