It’s true that on some of the most pressing of issues—immigration, trade, and foreign policy—Donald Trump’s “America First” positions are more align with traditional conservatism than are those of any other candidate.  That is, they clash with the neoconservatism, the faux “conservatism,” that the GOP Establishment and its media apologists have promoted for decades as the genuine article.

Yet this being said, in Trump’s nearly 70 years, until very recently, he has done little to nothing to indicate that he has so much as an awareness of the classical conservative tradition, much less a commitment to it.  Even if he really believes all that he is now saying, the inability of one person, even if he is the President, to accomplish what Trump vows to achieve supplies grounds for skepticism.

Nor is the Supreme Court, as so many Republicans would have us think, necessarily a sufficient reason to vote for Trump. Republicans play the Democrats’ game when they attempt to scare voters into thinking that, unless the latter reward them with political offices, the opposition party, by way of its Supreme Court Justice nominees, will deprive them of their guns, speech, borders, etc.  However, Article Three, Section II of the US Constitution explicitly states that “the Supreme Court shall have appellate jurisdiction, both as to law and fact, with such exceptions, and under such regulations as the Congress shall make” (emphasis added). 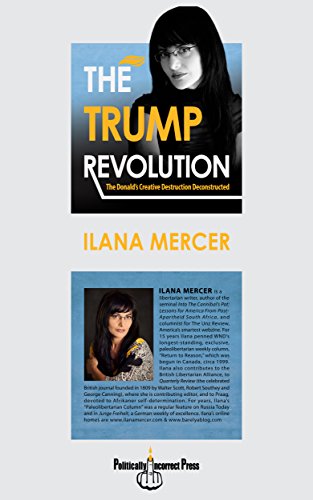 In short, Republicans could’ve ended years ago judicial tyranny by simply exercising their Congressional authority to determine which topics would fall within the jurisdiction of the Supreme Court.

Had Republicans done so, however, they would’ve imperiled their political fortunes.  Thus, in this era of Big Government, “Constitutional conservatives” (and Trump as well) drone on as if the Constitution doesn’t permit the people’s elected representatives to prohibit nine lawyers from running roughshod over the rights of the citizenry.

The final reason that’s given for supporting Trump, that it’s necessary in order to defeat Hillary Clinton, fares no better than the preceding two.

If the choice between Trump and Clinton really is, or is plausibly perceived to be, a choice between two evils, then the only conscionable course of action is to abstain from voting for either: As Saint Paul says, we must never do evil so that good may come from it.  Or, wishing to refrain from using the language of evil, we instead regard one as being “not as bad” as the other, the question then arises as to what this can mean?  It’s conceivable that a candidate who is worse in the short-term may prove to be better, for one’s party and one’s nation, in the long-term.  Or perhaps the differences between the two candidates simply aren’t sufficiently substantial to justify a vote for one over the other.

I believe that Trump qua the man is not as bad as Clinton. I also believe the same about many other Republicans—and Democrats, and third party candidates—who I wouldn’t vote for on this account.

There is one decisive reason for conservatives and libertarians to vote for Trump, but it has more to do with the Trump candidacy, or what Ilana Mercer calls “the Trump process,” than Trump the person.

For decades, there has been a virtual consensus across the political spectrum that “Washington,” or “the System,” is “broken.”  At any rate, that Americans share this intuition explains why those politicians running for office every election cycle repeatedly assure us that they are the candidates to “fix” the mess—even though they never do anything but further grease the wheels of the Government-Media apparatus.

Trump, in stark contrast, and in as little as 14 or so months, has ripped the System asunder.  He hasn’t just talked about the cancer.  He has vindicated in spades the suspicions of citizens by revealing just how advanced it is.  Beyond this, Trump, through his “creative destruction,” as Ilana Mercer describes the Trump phenomenon in her latest book, has spared no occasion to administer heavy-duty blasts of chemo.  Whether he recognizes it or not, Trump seems to instinctively know that before the patient can get better, he must get worse. He seems to know that the treatment is sometimes worse than the illness.

Notice, I’m not backing Trump because of what he promises to do in the future.   I’m backing him because of what he’s done already.  Trump has been a one-man wrecking crew, shattering the sacred cows of both the Democrat and Republican wings of the Establishment.  He has driven those in the “mainstream” media to relinquish the remaining vestiges of their authority by abandoning so much as the pretense of “objectivity” in their coverage of him even as he has unveiled the hypocrisy, opportunism, and pseudo-conservatism of their counterparts in the “conservative” media.

If things are ever to change for the better, this shaking up is necessary. There is another respect in which Trump is carving the time continuum of our political universe into two epochs, B.T. (Before Trump) and A.T. (After Trump):

In serving as the voice of tens of millions of previously voiceless Americans—the early 20th century political theorist William Graham Sumner referred to them (collectively) as “the Forgotten Man”—the very person of this unapologetically wealthy, white, heterosexual man symbolizes at once a resounding repudiation of the Politically Correct Zeitgeist propping up the Establishment and a profound psychological victory for millions over the cultural powers that have demonized them for far too long.

Whether he wins or loses in November, Trump has already won, for he’s succeeded in emboldening scores of Americans who would have otherwise remained disengaged, Americans who will not go quietly away or back to voting for Bushes, Kasichs, and Romneys.  He has made it acceptable, indeed, necessary, to talk aloud about issues that had long been neglected by partisans of both parties.

Trump is no traditional conservative. He’s no libertarian. Yet he has taken a crucial first step, a step that no one else had proven willing to take.

And for this, he has got my vote.

Lots of Smoke Here, HillaryJust How Dangerous Are the Media?