When Guerrilla Warfare Can Succeed — And When It Will Fail

Murray Rothbard was relatively fond of guerrilla warfare. He wasn’t fond of war, of course, which he considered to be synonymous with mass murder. But, he believed guerrilla warfare — conducted by non-state institutions — to be more morally legitimate than state-centric conventional warfare.

Modern warfare, after all, is primarily the domain of states, and it’s the reason states have been so successful. As historians of the state such as Charles Tilly, Hendrik Spruyt, and Martin van Creveld, have long noted, the state is exceptionally skilled at warfare. It’s why the modern bureaucratic state has endured as long as it has, and why it has crushed most competing institutions, such as churches, private defense forces, and family clans.

With the state so successful at war, is there any hope for non-states ever competing with states on the battlefield?

Well, thanks to a lengthy book on guerrilla warfare by — of all people — Max Boot, we can say that the answer is “it depends.” 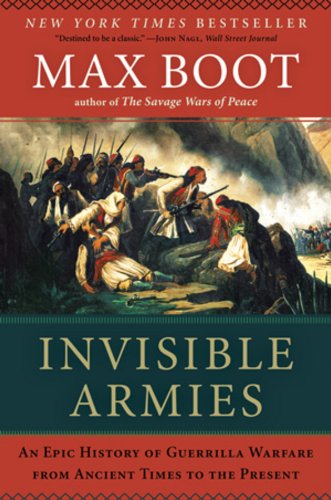 Boot, in writing his 2013 tome Invisible Armies: An Epic History of Guerrilla Warfare from Ancient Times to the Present, has attempted to create a guidebook of sorts for counterinsurgency. Being a neoconservative booster of the Pax Americana, Boot has no scruples about using state power to crush opposition to his nation-building programs. However, Boot recognizes that a thorough understanding of guerrilla warfare is helpful if one wishes to pursue the goal of defeating insurgency movements.

Thus, in this book, Boot spends more than 600 pages examining numerous historical episodes in which guerrilla warfare was victorious, or at least relevant to the outcome of armed conflicts.

While Boot tackles the topic with his own set of biases — which should be obvious to the discerning reader — Boot nevertheless manages to produce quite a few interesting insights into the nature of guerrilla warfare and how it has been used to undermine, destabilize, and even overthrow states in the past. This includes both the distant past and the recent past.

Indeed, in his final chapter, Boot reduces all his observation to a list of twelve principles about guerrilla warfare which he intends to be useful for any state conducting counterinsurgency operations:

Even without reading Boot’s book, many observers of international affairs will find these twelve “lessons” difficult to disagree with. The author has done an admirable job, however, of assembling many hundreds of pages of supporting evidence into a single volume.

When applied to recent experience, the book is relevant, of course, because one can easily apply these lessons to American efforts in Iraq and Afghanistan, and the failures the American state has encountered there. And while terrorism and guerrilla warfare are two distinct phenomena, there is nonetheless overlap between the two tactics and many terrorist organizations have employed both tactics.

Number 9, for example, has been especially relevant to American efforts in recent decades since the United States has failed to ever establish legitimacy for its efforts in Iraq and Afghanistan. Thus, insurgency efforts in those two countries have been largely successful in influencing American public opinion and in undermining American efforts there.

Boot’s book also gives us an indication of how terrorist organizations are likely to fail in their efforts outside of the Middle East. For example, Number 7 tells us that terrorist tactics used in Europe and the US in recent years — including gunning down and running over defenseless women and children — are unlikely to help the perpetrators in winning over public opinion.

And, Boot reminds us, public opinion is now an essential key to any insurgency effort, as indicated in Number 5. From the Chiapas uprising in Mexico to the Viet Cong, and to Palestinian insurgents, influencing public opinion — both locally and globally — is one of the most important factors in determining if an insurgency effort will be successful. Those who fail to win over at least a sizable portion of the public both at home and abroad are unlikely to succeed. In this, we find that the violence inflicted by insurgents is just part of a political strategy to undermine the adversary militarily. States are nearly always militarily superior to non-state insurgency movements. Whether or not states can win the political game, however, is something else entirely.

Historically, of course, Americans have known a thing or two about insurgencies. The US was founded as a result of a successful insurgency in the Revolution, and the US in the North managed to put down the Southern rebellion ninety years later.

The American Revolution is especially notable for the fact that a handful of relatively poor colonies were able to win in an armed conflict with the most powerful empire of its day.

Critics of the rebellion’s guerrilla efforts often point to French intervention in the war as the real reason for the Revolutions’ success. There is no denying that outside support is always helpful to guerrilla efforts — as noted in Boot’s list as Number 11.

However, the French interventions would likely not have been enough by themselves, and it was the successful guerrilla insurgency that often did the most damage to the British in terms of establishing legitimacy among the native population in the colonies. This was accomplished by insurgent efforts to force the British armed forces to brutalize and impoverish the natives in the process of chasing the American guerrillas. Thus, through this process, the Americans successfully cast the British as villains while establishing the American forces as both friendly and successful in the eyes of the native population. These political failures on the part of the British then magnified their military failures.

Naturally, any savvy insurgency group will both accept and seek out assistance from other states. This does not illustrate weakness on the part of the American insurgents. In fact, it demonstrates the insurgents’ strength, since the French would be unlikely to take the risk of assisting a military insurgency that was clearly incapable of attaining moral legitimacy or military success.

As Boot shows, the American Revolution is indeed an example of a successful guerrilla movement. The Americans accomplished this through efficient use of military resources, but more importantly, the Americans successfully managed the political situation, winning sympathy from both the French, the British public, and a host of European elites. In the end, it was the British public which forced the end of the war by refusing to continue supporting the fight after the defeat at Yorktown. Obviously, the British had the military resources to continue fighting indefinitely after Yorktown. The British military was in no danger of falling apart or running out of ammunition. But, insurgencies are primarily about politics, and military victories are only one factor in a much larger effort.

The Confederate secession movement illustrates what happens when insurgents manage the situation less well. The confederacy used guerrilla tactics far less than the American revolutionaries had, and the Confederacy insisted on a much more top-down military system than had been the case when Americans had successfully seceded from the British empire. Boot notes: “The Confederacy might have fared better if it had put more emphasis on … guerrilla operations, but it never did so because this ran counter to the planter class’s chivalrous notions of warfare and its desire to maintain the social order.”

Indeed, the Confederate government feared that any disruption to the established social order would lead to slave revolts while also encouraging poor whites to become uppity.

As JR Hummel illustrates here, the Southern state governments — dominated by wealthy planters — had long made more widespread use of conscription in efforts to force poor whites to staff slave patrols and to subsidize the slave system with the conscripted labor. This was in contrast to Northern states which made less use of conscription — and employed more decentralized political systems — because they had no reason to fear slave rebellions. In other words, the Southern states lacked the socio-economic and political flexibility necessary to employ a successful guerrilla movement.

Moreover, while the American revolutionaries had downplayed the role of slavery in their motivations — with Jefferson even criticizing slavery in his early draft of the Declaration of Independence — Southern secessionists had gone out of their way to name slavery as a primary motivating factor in their efforts. For example, the Mississippi declaration of secession states that “a blow at slavery is a blow at commerce and civilization” and plainly states that “Our position is thoroughly identified with the institution of slavery.” The South Carolina declaration of secession lists “hostility on the part of the non-slaveholding States to the institution of slavery” as a central reason for secession.

This unambiguously pro-slavery political agenda, combined with the Confederacy’s unwillingness to engage in irregular military operations, hindered and even crippled the Southern effort to win foreign support from foreigners or Northerners in the US. Richard Cobden, for example, Europe’s leading free-trade liberal at the time, refused to support the South because of its position on slavery. Cobden even noted in an 1863 speech that his 1859 visit to the United States had convinced him that slavery, and not free trade, was the reason for the South’s bid for independence.

This failure to capture the imaginations of Europe’s liberals and free traders was deadly to the Confederate cause and illustrates the essential interplay between military power and public opinion in waging a rebellion against an established state.

The book does not stop with American, examples, however, and goes on to examine dozens of others, including the Irish independence movement, Russian anarchists, Mao’s war against the Chinese nationalists, and many others.

Some of these movements are successful, and many are not. Nevertheless, we find that non-state institutions can indeed succeed against far more powerful state institutions if the conditions are correct, and if the insurgents read the political signs carefully.

While written as an aid to large states seeking to put down insurgent movements, Boot’s book can nevertheless be of considerable interest to those looking for a history of states and the wars they inflict on others worldwide.

Previous article by Ryan McMaken: Forget the FBI and NSA

Learning What It’s Like To Be Serfs? Death of a Nation