Hillary Clinton, the Plutocracy, and the Constitutional Right of Revolution

You’ve really got to be careful when you travel to third world countries. They have these banana republics where they can steal from you, beat you, and lie to you. You might go to jail but the authorities there can literally get away with murder, theft, and deceit.  And heaven forbid that you end up in jail there because they are hellholes in which you will likely be beaten, raped, and forced to perform slave labor.

Wow, aren’t you glad it isn’t like that in America? Here in the land of the free, we don’t have to deal with that kind of corruption.

If you ever had any doubt that we are living in a plutocracy, the exoneration of Hillary Clinton (ironically, the day after we celebrated our revolution and independence) should be sufficient evidence to assure you that, indeed, we are living in a place in which power is determined by your wealth and your connections to wealthy people.

I wasn’t surprised when the FBI announced that Hillary Clinton didn’t deserve any criminal charges for her carelessness with national security, but I was saddened.  I felt sick, all day because the truth of what our nation has become was made so painfully, blithely obvious.

I was saddened because that was more than just a nail in the coffin of justice. It was the dirt being shoveled on top of the coffin. Any illusion we had about equality and freedom in America was buried alive, suffocating under the weight of the Clintons, the mainstream media, and influential social networks.

We all know that Hillary Clinton was treasonously careless with our national security, and yet she won’t even receive a slap on the wrist. Not even a misdemeanor. What Hillary Clinton has gotten from abusing her position is rich. Filthy rich.

She has lied since the very first question arose. Everything she has said in her own defense has been a lie. The AP fact checked them if you’d like your information from a mainstream source. They found all of the following to be lies, simply by using public records.

“I never received nor sent any material that was marked classified.”

“I responded right away and provided all my emails that could possibly be work related.”

“I thought it would be easier to carry just one device for my work and for personal emails instead of two.”

Comey himself admitted that several of these statements were lies. And yet, somehow, the chief of the Federal Bureau of Investigation found that Clinton doesn’t deserve any kind of punishment – oh and that she’s still an awesome candidate for the highest office in the land.

The FBI had to rewrite the law in order to say that Clinton was not guilty. From tAndrew McCarthy, a former assistant US Attorney:

There is no way of getting around this: According to Director James Comey (disclosure: a former colleague and longtime friend of mine), Hillary Clinton checked every box required for a felony violation of Section 793(f) of the federal penal code (Title 18): With lawful access to highly classified information she acted with gross negligence in removing and causing it to be removed it from its proper place of custody, and she transmitted it and caused it to be transmitted to others not authorized to have it, in patent violation of her trust. Director Comey even conceded that former Secretary Clinton was “extremely careless” and strongly suggested that her recklessness very likely led to communications (her own and those she corresponded with) being intercepted by foreign intelligence services.

Yet, Director Comey recommended against prosecution of the law violations he clearly found on the ground that there was no intent to harm the United States.

In essence, in order to give Mrs. Clinton a pass, the FBI rewrote the statute, inserting an intent element that Congress did not require. The added intent element, moreover, makes no sense: The point of having a statute that criminalizes gross negligence is to underscore that government officials have a special obligation to safeguard national defense secrets; when they fail to carry out that obligation due to gross negligence, they are guilty of serious wrongdoing.

Even the wildly liberal NY Post was baffled by this decision. (I actually never thought I’d link to them except to make fun of what they said, but there you have it.) Those who know Hillary Clinton know that she lives by an entirely different set of rules.

Oh – and if your name is NOT Hillary Clinton and you mishandle classified information, it seems that the FBI isn’t so warm and fuzzy. If your name is Bryan Nishimura and you are just a Naval reservist you get prosecuted, fined, and lose your top secret clearance forever.

It isn’t only the FBI who is aiding and abetting this destruction of our country. If you are under any delusions that the election is not rigged, the justice will prevail, or that we have nothing to worry about if we aren’t doing anything wrong, it is time to do some deep, difficult research.

The folks pulling the strings over on Facebook really seem to want to see Hillary Clinton elected. And before you roll your eyes about Facebook, you have to understand that the social media network is incredibly influential. They promise to use their power neutrally, of course, but the fact remains that they could tilt the election. An interview on Gizmodo tells us that this is only lip service to fairness, though.

Just like the IRS was proven to have targeted conservative groups, a former Facebook employee says that the staff “routinely suppressed conservative news.” There are 5 ways that Facebook can nudge the “right” voters to the polls and control the information presented about the candidates. (You can check those out here.)

But that’s not all.

Some segments of the news media has announced that the “right response to Donald Trump” is a media blackout. 6,166 idiots who clearly don’t understand the benefit of hearing both sides of the story even petitioned the media to blackout coverage of Trump. Now, I’m not a big fan of Trump, but I think we can all agree that we have a right to hear what the guy has to say if we have to listen to what Clinton has to say.

But it isn’t just Trump who got the short end of the media coverage stick. Except for the time that bird landed on his podium during a speech, Bernie Sanders also suffered from the media’s pro-Clinton leanings. A Harvard study confirms this fact. With millions of votes left to be counted in California, the state announced that Hillary Clinton had won the primary there. Many believe that this is patently untrue and that Sanders actually won the state but the truth lies out there covered up somewhere with the other Hillary Clinton scandals. As far as I could find, there is no final tally…anywhere.

They don’t even try to hide their bias. Yesterday, Nick Bernabe of the Anti-Media made this catch on Facebook. C-Span paid to sponsor a post on Facebook that was positive about the FBI’s decision, just so more people would see it. 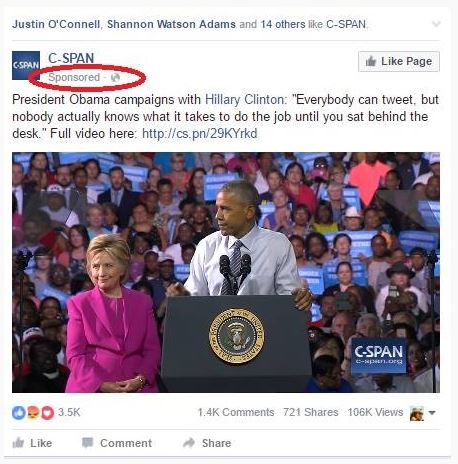 This isn’t about Hillary Clinton.

I’m as disgusted by the fact that Hillary Clinton is above the law as anyone else. But this is only a symptom of cancer that is eating away at the foundations of our country.

They are getting richer and more powerful, while our lives become more difficult. Their positions in Washington have no term limits and they sit there, feasting for a lifetime while feeding us the dregs of whatever is leftover.  They tax us, they regulate us, they fine us, they try to force us to purchase things like Obamacare which would impoverish us, and meanwhile, they are exempt from it all.

Stock up, my friends, because we are in for a bumpy ride.

Why isn’t there a revolution right now?

I’m sure someone will tell me, “If you don’t like our government, you can get out.”

I’m not getting out. Our freedom is worth fighting for. The people who should get out are the ones who are stealing it from us.

Every single “representative” in Washington DC needs to be afraid to go against their constituents. They need to understand that the new parameters of the position are to first honor the people who elected them and not the special interests that make them rich.

People are starting to wake up. They are starting to see the truth. They are learning that George Orwell was a freakin’ prophet, not a writer of fiction, when he said, “All animals are equal, but some are more equal than others.”

Now that you’re awake, what do you intend to do about it?

Even if you like to “stay out of politics” the time has come for you to get involved. For you to be loud. For you to support our natural rights to not be coerced and extorted. For you to demand the truth and make people listen.

And wait for it. The bread and circuses will be coming soon. Look for another “incident” to occur to take people’s minds off of what is really going on. People will be distracted by whether that dress is blue or gold. They’ll be horrified by another supposed act of terror and they’ll throw some freedom out the window in order to be safer. They’ll pick a side when Celeb 1 cheats on Celeb 2 with Celeb 3 and then they all decide to be polygamous and dress up like dogs in the bedroom.

This is how awakenings get sidetracked. Because most Americans seem to have the attention span of goldfish, it’s easy to manipulate them out of their outrage about the Clinton issue.

But some of us won’t be distracted. It’s time to take our country back. It’s time to demand our natural rights. To flout unjust laws. To refuse to be silenced. To look the truth in the eye and be willing to accept what we learn, no matter how much it goes against our beloved normalcy bias.

We have the right of revolution.

The right of revolution was irrevocably intertwined in the Constitution and in the documents of the Founding Fathers.

We can withdraw our consent. We can revolt against:

These are the people in power. It is a plutocracy instead of a constitutional republic, and those with the most money win.

According to the Declaration of Independence

“We hold these truths to be self-evident, that all men are created equal, that they are endowed by their Creator with certain unalienable Rights, that among these are Life, Liberty and the pursuit of Happiness.–That to secure these rights, Governments are instituted among Men, deriving their just powers from the consent of the governed, –That whenever any Form of Government becomes destructive of these ends, it is the Right of the People to alter or to abolish it, and to institute new Government, laying its foundation on such principles and organizing its powers in such form, as to them shall seem most likely to effect their Safety and Happiness.”

Only 3% of the population fought in the Revolutionary War, and 10% actively supported them.

There are nearly 316 million people in the United States. (source)

If 9,480,000 people quietly and peacefully revolted by withdrawing their consent to be governed by tyrants we could not be silenced.

It’s time to use our right of revolution.  It’s time to bring truth and justice back to America.

Previous article by Daisy Luther: Just Say NO to the State